On Tuesday, CNN's New Day profiled a West Virginia family who can afford to care for their paralyzed son due to recieving health insurance through ObamaCare. Although an unfortunate circumstance, the story was a blatant case of media bias in favor of maintaing the law. At the end of the story, correspondent Miguel Marquez inserted his opinion and said preserving ObamaCare is "a cause worth fighting for."

Cedric Claytor was an active gymnist until a rare blood disease required a liver transplant and contracted a neurological disorder, which fully paralyzed him four years later. Marquez explained, “Before ObamaCare, most insurance policies had lifetime and sometimes annual limits on care. The Affordable Care Act got rid of all of it with insurance regardless of whether they got it privately, through their employer with Medicare or Medicaid.”

After featuring the parents feeling uncertain about what would happen if the health care law is repealed, Cedric's father, Howard, called for lawmakers to meet with them. “Come and sit with us one day and see what we go through. That's all you have to do,” he said. Cedric's mother, Mary, added, “I think what they need to be able to do is put faces to what they are talking about.”

While the Claytors can afford health care for their son, CNN should consider stories about those who cannot afford Obamacare or lost their insurance due to the health care mandate.

In December 2014, the Washington Post published a feature written by a Chapman University professor Catherine Keefe, who was initially excited about President Obama's health care reform and thought it would benefit her husband Jim recovering from open-heart surgery. Jim lost his small-business health plan despite the President's assurance “If you like your plan you can keep it.”

Consequentially, Keefe's husband, then diagnosed with prostate cancer, paid for an ObamaCare plan of $82 more a month in premiums. “We’re deeply concerned about our ability to get quality medical care from doctors we trust,” Keefe, an Obama supporter, wrote. “The day may soon come when we can’t afford the plans our doctors accept, or we’ll have to wait hours to seen.”

The Guardian profiled in November 2015 both the health problems and costs affecting the Moore family in Texas. A mother who had to quit her job and undergo treatment for multiple types of cancer, a daughter treating atypical moles--which can lead to melanoma-- and a father who also had to quit his job, losing his health insurance, due to developing blood clots, have had to rely on the federal exchange they have found to be unaffordable.

“Just don’t go the doctor. Don’t do those preventative care visits that probably helped me find out I had breast cancer and thyroid cancer early on,” Linda Moore said. “Just don’t find out and don’t get it fixed. Which is ludicrous but at this point what do you do? It becomes insanely expensive, it’s a whole different ball game from what it used to be.”

Here is the February 7 segment:

CHRIS CUOMO: Here’s some reminding that President Trump vowed to repeal ObamaCare right away, maybe day one. We're two weeks into the presidency and the idea of a replacement for ACA seems remote. A West Virginia family tells us that law is keeping their son alive. CNN's Miguel Marquez has their story.

MIGUEL MARTINEZ: In the fight for Obamacare, the most powerful voices, those like Cedric Claytor's, the 29-year-old paralyzed from the neck down can't utter a word.

HOWARD CLAYTOR [CEDRIC'S FATHER, TALKING TO HIS SON]: You're okay.

MARQUEZ: Ten years ago Cedric was an avid gymnast. A rare blood disease required a liver transplant. Then he contracted a neurological disorder. Over four years it paralyzed him.

MARQUEZ [TO CEDRIC'S PARENTS]: How much is it to keep him going?

MARY ANN CLAYTOR [CEDRIC'S MOTHER]: From 6 to midnight is -- 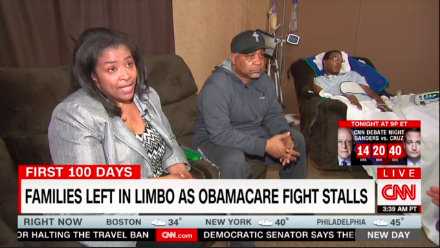 MARQUEZ: The Claytors have insurance through their job but ObamaCare did one thing for them and everyone else, remove the million lifetime limit on care. Anyone who's ever dealt with serious illness knows how rapidly the bills can mount.

MARQUEZ: Before ObamaCare, most insurance policies had lifetime and sometimes annual limits on care. The Affordable Care Act got rid of all of it with insurance regardless of whether they got it privately, through their employer with Medicare or Medicaid.

MARQUEZ [TO CEDRIC'S PARENTS]: If ObamaCare goes away, do you know what will happen?

HOWARD CLAYTOR: If we can't afford his medicines, we don't know what's going to happen.

MARQUEZ: Cedric's medications alone administered by the handful ground up served intravenously morning and night cost in the thousands.

HOWARD CLAYTOR: We both work. I've got insurance. We make good money and it's still hard to get by. If it wasn't for Obamacare, he would have been dead a long time ago.

HOWARD CLAYTOR [TO CEDRIC]: Smile for the camera.

MARQUEZ: They have essentially transformed themselves into nurses, a full-time effort. Their son's health now as uncertain as their health care. Their message to those rushing for repeal.

HOWARD CLAYTOR: Come and sit with us one day and see what we go through. That's all you have to do.

MARY ANN CLAYTOR: I think what they need to be able to do is put faces to what they are talking about.

MARQUEZ: Cedric Claytor, his body devastated by disease, still loved and a cause worth fighting for. Miguel Marquez, CNN, Charleston, West Virginia.

CUOMO: That is a family just united in an endless struggle for their kid. Just one example of how a law can make all the difference in a life.

ALISYN CAMEROTA: Absolutely. That story really brings it home and there are others like that out there. All right.