On Wednesday, Andrea Mitchell Reports mostly featured Democrats questioning Health and Human Services nominee Georgia representative Tom Price, and transitioned from showing the hearing to another segment on the show whenever a Republican took the stage. Only one Republican was featured questioning Price.

Reviewing footage, Mitchell mostly showed Price questioned by Democratic senators such as Patty Murray of Washington, Chris Murphy, of Connecticut, and Tammy Baldwin of Wisconsin. After highlighting Price being questioned by Murray about allegations of purchasing stock related to bills he would soon vote on, the show switched to host Andrea Mitchell asking correspondent Kasie Hunt, reporting outside the Committee on Health, Education, Labor and Pensions, about the possible legal ramifications. 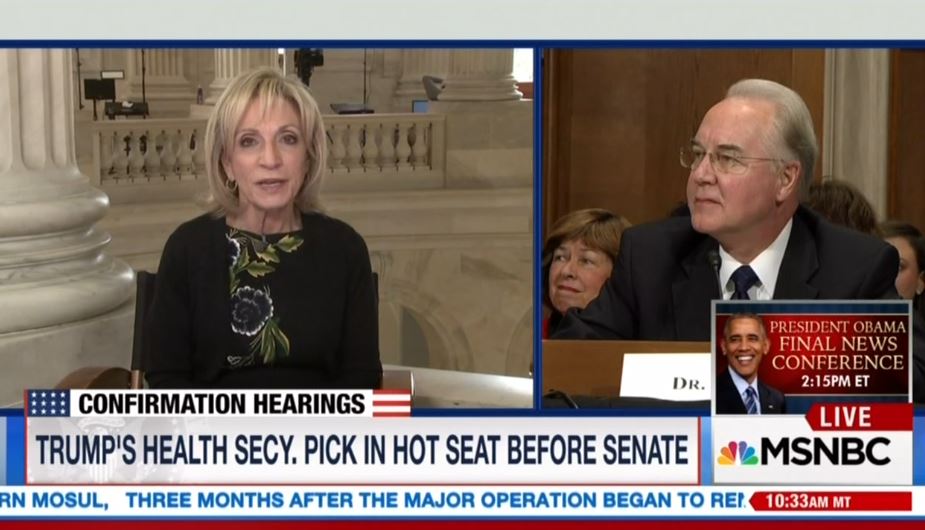 After analysis by NBC News correspodents Kelly O'Donnell and Anne Thompson, following Hunt's report, Mitchell proceeded to interview Shaheen. She talked about her questioning of South Carolina governor Nikki Haley, who President-elect Donald Trump nominated as US Ambassador to the United Nations. Mitchell also asked Shaheen about Trump's other nominees such as Exxon Mobil chairman Rex Tillerson for Secretary of State. After the Shaheen interview, the show transitioned back to the Price hearing, where the only Republican highlighted questioning Price was Kansas senator Pat Roberts, followed by Baldwin.

After showing Baldwin questioning Price, Mitchell proceeded to interview Warner and started by remarking, "We are watching Tom Price, congressman from Gerogia, the nominee to be Health and Human Services secretary, getting a fairly tough grilling from the committee, the House Committee on Health and Education and Labor, but they are not the confirming committee." The confirming Senate committee which will vote on Price's nomination will be the Senate Finance Committee, which Warner is a member of.

Toward the end of the show, after Mitchell interviewed NBC's Michael Beschloss and the Washington Post's Michael Gerson, the show ended by showing Price interrogated by Democratic Massachusetts senator Elizabeth Warren, which was featured to start the 1 PM hour with host Craig Melvin.