Citing an article in the Los Angeles Times which explained that under the Obama administration, contrary to White House reports, deportations of minors has actually decreased. Karl told Earnest that according the article deportation of minors is “1/5 of what it had been” and asked, “Doesn’t that show that what you are saying is disinformation?” Earnest answered by shifting blame onto, where else, the “previous president.”

The riff began when Karl asked Earnest if he had an “an answer for me yet as to how many of those that are released with the promise of returning for a court date are actually showing up for their hearing?” Earnest told him he did not yet have the numbers for him which agitated the ABC reporter. Karl asked Earnest if he could give him any idea of what the number was, was it “closer to 10 percent than 100 percent?” Earnest didn’t give in. Instead he argued that the number would not be accurate in light of the recent surge at the border.

That’s when Karl moved to the L.A. Times article and asked Earnest if that paper's findings proves that the White House is giving “disinformation.” Earnest argued to the contrary by shifting blame on the law signed by the “previous president.” Karl didn’t buy the “blaming the law” notion touted by Earnest by stating that, “the bottom line is that minors that are coming into this country illegally by in large are being allowed to stay because there have been so few deportations.” Earnest tried to say he wasn't blaming the law, rather was explaining it so that people are aware of why the president is acting the way he is.

JON KARL: Have you been able to get an answer for me yet as to how many of those that are released with the promise of returning for a court date are actually showing up for their hearing? 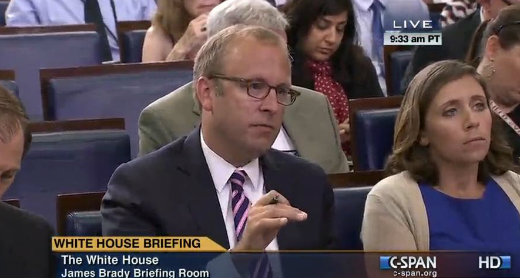 JOSH EARNEST: I don’t have a specific number in front of me, Jon.

KARL: It’s been a couple of weeks. Is there a reason you can't --

EARNEST: There are a couple of things for you to understand. If I had the number, it would not give you an accurate picture of what’s actually happening. We have seen a recent surge in the last few weeks of the recent arrivals. Sometimes, because the backlog is lengthy, the notice to appear is in some cases a rather lengthy period of time. Those who are given a notice to appear but did not appear for their court date that might not necessarily give you a very accurate picture of what is exactly happening.

KARL: It’s a rather small number. Not many are showing up for their hearings, right?

EARNEST: I don’t have the number in front of me, Jon

EARNEST: I think what the number would illustrate is that the court is not operating as efficiently as we would like it to. Particularly in light of the recent surge at the southwest border. That is why we are seeking additional resources to whittle down that back log to deal with those who have been recently apprehended and making sure we are enforcing the law.

KARL: The LA Times filed a Freedom of Information request and got some numbers from previous years. It showed in 2008 that there were more than 8,000 minors had been sent back, deported. Last year that number had fallen to less than 2,000. It was almost 1/5 of what it had been. Doesn’t that show that what you are saying is disinformation that when the smugglers promise that they’ll be able to stay. Effectively, if true – This administration has not really been deporting minors

EARNEST: Jon, what’s important the difference between 2008 and more recent statistics that you’re citing is the passage of that law by congress in 2008 that was signed into law by the previous President. What that law mandated was a difference in the way children who arrived in the country from non-contiguous countries are treated in the immigration system. The numbers you cite reflect – or are the consequence of this administrations consistent commitment for enforcing the law. What we are seeking is greater authority for the Secretary of Homeland Security to exercise some discretion which would allow him to make that process more efficient. And in some cases more quickly and promptly remove some children from this country if it is found that they do not qualify for humanitarian relief. Understanding those numbers that were presented in the Times this morning requires someone to take in account what the enforcement of the law requires. And what that law required was a longer process for adjudicating the cases from of these children from non-contiguous countries.

KARL: But the bottom line is that minors that are coming into this country illegally by in large are being allowed to stay because there have been so few deportations. You may blame it on the law, others may blame it on lax enforcement –

EARNEST: I am not blaming it on the law. I am merely citing this is what the law requires. There is a suggestion from our opponents that the problem is that the President is not upholding the law. The fact is the president is enforcing the law. We are seeing a greater authority to more effectively enforce that law that would allow the it administration to act more quickly in some cases to return children from the country the originated if its found they don’t have a legal standing for staying here.