Hardly a news cycle passes without another phony controversy conjured by the left in a flailing effort to discredit Donald Trump before he takes office.

The latest mock-outrage du jour stems from Trump's inexplicable refusal to observe the subtleties of diplomatic protocol by taking a phone call from another world leader without first getting it vetted through a State Department still run by the outgoing president of the opposing party. Such indelicacies can cause many a sleepless night for career diplomats. Have you no shame, Mr. President-elect?!

Joining the chorus of media luminaries who are shocked, shocked by Trump's refusal to play by their rules was longtime Clinton operative George Stephanopoulos in his prominent role as host of the ABC Sunday show This Week.

Defending Trump was Vice President-elect Mike Pence, who demonstrates the wisdom of Trump's choice of running mate with every unflappable media appearance --

STEPHANOPOULOS: Let's get right to China, that call with the leader of Taiwan. As far as we know, no president or president-elect has spoken with Taiwan's leader in nearly four decades. Why did Mr. Trump choose to break that precedent?

PENCE: Well, I'll tell you what, from the morning after the election we've seen the President-elect engaging the world. He's spoken to more than 50 world leaders. I've spoken to several dozen myself. And he received a courtesy call from the democratically elected president of Taiwan to congratulate him ...

STEPHANOPOULOS: That was pre-arranged, wasn't it?

So much for one of the left's narratives on this, that alleged blithering idiot Trump had no idea what he was doing when the phone rang. Stephanopoulos speaks from experience, having handled media during Bill Clinton's '92 campaign and in Clinton's first term.

STEPHANOPOULOS: Did he intend to send the kind of signal it sent because the Chinese government has already complained about this. How did you guys respond to that?

PENCE: Well, I understand some of the controversy in the media about this but ...

STEPHANOPOULOS: It's not just the media, it's the Chinese government.

PENCE: Well, yes, of course but I would tell you that I think the American people find it very refreshing, the energy that our President-elect is bringing to this whole transition. He's not only bringing together a cabinet at a historic pace for the last 40 years, he's not only assembling a legislative agenda to move forward this country at home and abroad, but he's also been engaging the world. I think during the course of the transition eight years ago, President Obama, it's reported, spoke to 22 world leaders and ...

STEPHANOPOULOS: He did not, though, speak to the leader of Taiwan. That's what I'm trying to figure out.

PENCE: ... more than 50. I think the American people want, are encouraged rather, George, to see that President-elect Trump is taking calls from the world, speaking to the world. They know he's going to be out there advancing America's interest first with that broad-shouldered leadership that's characterized his entire life. But I think it all begins with relationships and that was nothing more than taking a courtesy call of congratulations from the democratically-elected leader of Taiwan ...

STEPHANOPOULOS: So no implications for the One China policy?

PENCE: Well, we'll deal with policy after January the 20th. This was a courtesy call and plus, I have to tell you, George, it's a little mystifying to me that President Obama can reach out to a murdering dictator in Cuba in the last year and be hailed as a hero for doing it and President-elect Donald Trump takes a courtesy call from the democratically-elected leader in Taiwan and it's become something of a controversy. But I think the American people appreciate the fact that our President-elect is taking calls from and reaching out to the world and preparing on day one to lead America on the world stage. 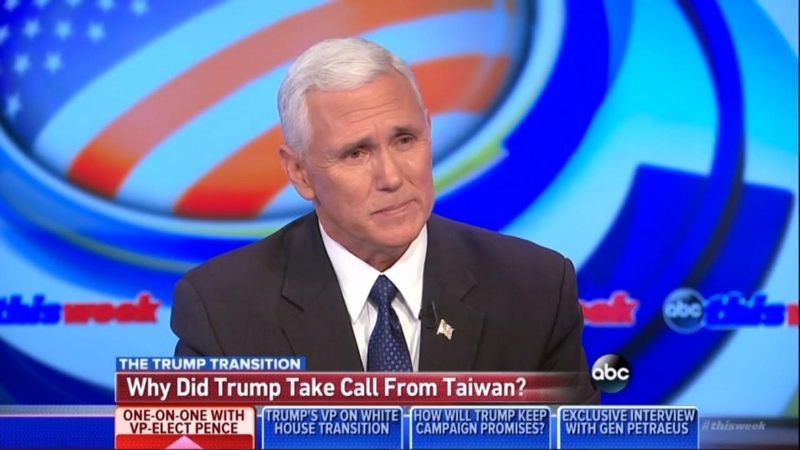 That's weird -- aren't liberals forever harping on the need for diplomacy, regardless of who's doing the talking on the other end? That they do, but with a seldom-mentioned asterisk -- unless it risks angering communists. It's a thoroughly embedded Democrat piety predating the One China policy by more than a decade.

Imagine a remotely comparable venting from the left had it been President-elect Clinton, the first woman to become president of the United States, taking a congratulatory call from Tsai Ing-wen, the first woman elected president of the Republic of China, aka Taiwan, and leader of that country's Democratic Progressive Party. Yes, hard to imagine -- because the exact opposite would have occurred. Far from belittling Clinton for not showing proper deference to the communist behemoth founded by Mao, Hillary's apologists would have basked in the moment when she flouted protocol and celebrated with another courageous woman who shattered the glass ceiling.

Noticeably absent from the left's phony anger is any praise for Tsai's boldness in conversing with Trump, regardless of whether it would anger mainland communists who view Taiwan as a renegade province.