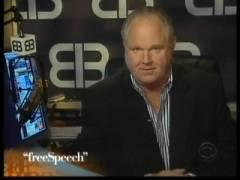 Hot Air has the video.

"If you’ve been with us this week, you probably know we have a new segment we’re trying called 'free speech,' where news makers, opinion makers and just plain folks tell us what’s on their mind.

"With the fifth anniversary of 9-11 coming up, the topic tonight is the war on terror. And there may be no one more opinionated on the subject than radio talk show host, Rush Limbaugh."

"My friends, it’s time to face a hard, cold fact: Militant Islam wants to kill us just because we’re alive and don’t believe as they do. And they’ve been killing us for decades. So it’s time to stop pretending these terrorist incidents are mere episodic events and face the reality that our way of life is in grave danger.

"Now, this threat is not going to go away because we choose to ignore it. Some say we should try diplomacy. Yeah, well, tell me, how do we negotiate with people whose starting point is our death? Ask them to wait for ten years before they kill us? When good negotiates with evil, evil will always win. And peace follows victory, not words issued by diplomats.

"But some Americans, sadly, not interested in victory. And yet they want us to believe that their behavior is patriotic. Well, it’s not. When the critics are more interested in punishing this country over a few incidents at Abu Graib and Guantanamo Bay, than they are at defeating those who want to kill us. When they seek to destroy a foreign surveillance program which is designed to identify those who want to kill us and how they intend to do it. When they want to grant those who want to kill us U.S. Constitutional rights, I don’t call that patriotic. Patriotism is rallying behind the country, regardless of party affiliation, to defeat Islamo-fascism. Patriotism is supporting our troops on the battle field, not undermining the mission and moral. Let there be no doubt about this: America will prevail. We’re the same country that survived a bloody civil war, defeated the Nazis and the Soviets. Each generation has a responsibility to the next, our generation will not dissapoint."