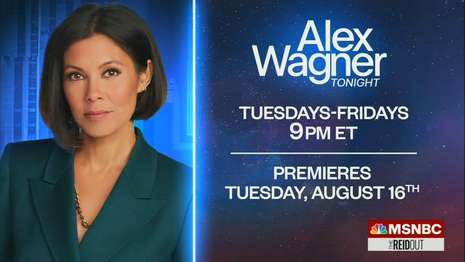 So you won’t have Rachel Maddow to kick around any more. Well okay she’s not retiring and she will still be on MSNBC one night (Mondays) a week but rest assured her timeslot (9pm Tuesday through Friday) will be occupied by a familiar lefty — former MSNBC host and Showtime’s “The Circus” co-host Alex Wagner.

Back on June 27, MSNBC announced that Wagner will be occupying the Maddow chair for four nights a week (officially starting this Tuesday night, August 16.)

It’s a bit of an odd choice given that her first stint as an MSNBC host didn’t end well when it was canceled in 2015 for poor ratings.

A look back at Wagner’s run on her eponymously named show Now with Alex Wagner reveals early examples of her  ridiculous overplaying of the race card — “Usage of the word ‘thug’ spiked on Monday...Some people are saying the ‘T’ word is the new ‘N’ word” — and silly sucking-up to libs. She once gushed to Chelsea Clinton: “I must bring up the fact that your mother — she graced us all. Everyone is thrilled that she is now on Twitter.”

Wagner is also on record as wanting to completely ditch the Second Amendment. In 2011 she told Bill Maher on his HBO Real Time show: “Get rid of the Second Amendment, the right to bear arms. I just think in the grand scheme of the rights that we have…. owning a gun does not….tally on the same level as those other Constitutional rights.”

The following are the worst outbursts from Wagner via the MRC’s archive:

Host Bill Maher: “This is the moment in America that Rome faced with Julius Caesar when the republic became a dictatorship. I know they are going to acquit him but the fact that we had this trial and there was no witnesses and we don't care about laws anymore or rules or what matters, when it goes from nation of laws republic to Senate that just goes along and might is right, that is that moment I know that sounds overly dramatic.”
Former MSNBC host and current Showtime’s The Circus co-host Alex Wagner: “It’s not. It’s heartbreaking. It's a farce that there are Republican senators in the audience with fidget spinners, but when you think about the gravity of the moment, this is a test of liberal democracy....Has one party become so corrupted by power that they’re shredding the basic principles of what the country stands for?”
— HBO’s Real Time with Bill Maher, January 24, 2020.

“Let me be very clear. The addition of a citizenship question is to keep immigrants and their families in the shadows, it is to disenfranchise cities with large immigrant and minority populations and it is to skew congressional redistricting that happens in 2020 to disenfranchise largely Democratic states and cities that have large minority and immigrant populations. That is why there’s a citizenship question.”
— CBS News correspondent Alex Wagner on HBO’s Real Time with Bill Maher, April 20, 2018.

Alex Wagner Sucks Up to the Clintons

“When we talk about women’s participation and women’s involvement in the world, I must bring up the fact that your mother [Hillary Clinton] — she graced us all. Everyone is thrilled that she is now on Twitter. She has, in my humble opinion, one of the best Twitter bios on the Twittersphere.”
...
“This is, I think, the fifth anniversary of your mother’s ‘shattering the glass ceiling’ speech. Do you think we need — and I’m not naming names — do you think we need a woman in the White House? Do you think America needs to sort of achieve that milestone, being the leader in the globe that we are today?”
— Two of MSNBC host Alex Wagner’s questions for Chelsea Clinton on the June 14, 2013 edition of Now with Alex Wagner.

“Around immigration, there’s a sense that we need to punish people when they come here and they don’t know our language. We gotta punish people who came here the wrong way, even if they’ve been contributing to American society for a decade or more. Bigger, meaner, scarier fences by people suggesting electrified, alligator-filled moats to prevent ‘them’ coming in, by the language we use to talk about ‘those people’ who want to be here. You know what? Those people who want to be here are us. That’s what this country is made of.”
— MSNBC host Alex Wagner in one of her network’s “Lean Forward” commercials, aired during June 2013.

“Just when you thought the Republican Party’s open antagonism toward women and their reproductive organs couldn’t get any more hostile, hours ago, talk show host, former governor, and failed presidential candidate Mike Huckabee took it upon himself to ‘mansplain’ to the women of America how one party wants to tame their wild libidos.”
— Host Alex Wagner on MSNBC’s Now with Alex Wagner, January 23, 2014.

Anti-Illegal Immigration Protest Makes Alex Ashamed to Be an American

“When you see the footage of these furious crowds yelling ‘Go home, go home,’ I think it brings — I will say personally, I found it to be a shameful moment to be an American, to see people treated like that, people who are seeking a new day here in America.”
— Host Alex Wagner on MSNBC’s Now with Alex Wagner, July 2, 2014.

Host Alex Wagner: “Usage of the word ‘thug’ spiked on Monday — appearing in roughly 50,000 tweets....The word’s ubiquity has, this week, led to re-examination of the origins of the word ‘thug,’ and the debate over its racial connotations....Some people are saying the ‘T’ word is the new ‘N’ word. Give us your take.”
Salon contributor Brittney Cooper: “Sure. It’s rooted in a racialized understanding of black people. So, for instance, no one is calling the police who put this kid in a van and snapped his spine and crushed his voicebox ‘thugs’ — right?...When are we going to have a language to talk about the systemic violence that white folks do in the name of anti-blackness and white supremacy in this country?”
— Exchange on MSNBC’s Now with Alex Wagner, April 29, 2015.

Alex Wagner: “Democrats hoping to get minority voters to the polls have instead focused on race and racial bias. In North Carolina, Harry Reid’s Senate Majority PAC ran this radio spot attacking GOP Senate candidate Tom Tillis.”
Ad clip: “Tillis won’t fight for us. Instead he made it harder for communities of color to vote, by restricting early voting and voter registration. Tillis even led the effort to pass the type of stand your ground laws that caused the shooting death of Trayvon Martin.”
Wagner: “In Georgia, state Democrats printed a flyer warning that the way to prevent ‘another Ferguson’ is to vote. Arkansas residents meanwhile, received a mailer showing a man in a hands-up, don’t shoot position made infamous in the wake of Michael Brown’s killing. The mailer reads: ‘If we want to end senseless killings like Michael Brown in Ferguson, Missouri, we need to vote’...It’s important to say that it shouldn’t have to be the threat of undermining civil rights that gets people to vote, but if it does, so much stronger the party is for it.”
— MSNBC’s Now with Alex Wagner, October 30, 2014.

Melodramatic MSNBCer Wagner: “We Are Back in, Like, Margaret Sanger Days”

“I just can’t – you know, Cecile, it’s like every time we have a discussion it feels like the clock has turned back even more, you know. And it feels like the ACA was progress and it’s real, and yet the force is pulling us back – not just on the question of national health care, but on the question of access to contraception. I mean, we are back in, like, Margaret Sanger days here.”
— MSNBC’s Now with Alex Wagner, March 21, 2014.

Time to Scrap the Second Amendment

“I think get rid of the Second Amendment, the right to bear arms. I just think in the grand scheme of the rights that we have; the right of assembly, free speech, I mean, owning a gun does not, it does not tally on the same level as those other Constitutional rights.”
— MSNBC host Alex Wagner on HBO’s Real Time With Bill Maher, November 4, 2011.