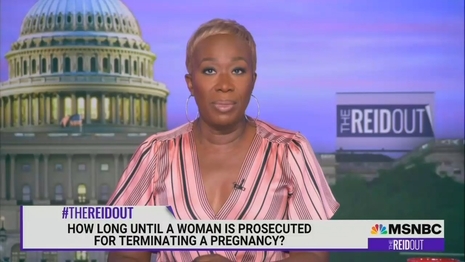 The enraged overreactions (from leftist journalists and celebrities) to the Supreme Court’s decision to overturn Roe keep pouring in.

MSNBC’s Joy Reid railed that American women will now become “state property.” Some of Reid’s fellow MSNBCers even warned that the conservative justices would soon end “desegregation” and bring back “witch trials.” NPR’s Melissa Harris-Perry claimed that “future generations will look back on Dobbs” with “the same disgust that is now reserved” for the infamous Dredd Scott decision.

The celebrity set got in a few new shots too. ABC’s The View co-host Whoopi Goldberg complained the decision put the U.S. on par with human rights violators like Saudi Arabia. TBS talk show host Samantha Bee (just 16 days after the assassination attempt on Justice Brett Kavanaugh) urged her lefty viewers in a June 24 tweet to “raise hell in our cities, in Washington, in every restaurant Justice [Samuel] Alito eats at for the rest of his life, because if Republicans have made our lives hell, it’s time to return the favor.”

The following are just a few of the most recent outbursts from lefty journalists and celebrities stemming from the Supreme Court’s Dobbs decision. To see more of their wildest reactions dating back to the Supreme Court leak in May please go here, here and here.

Women Are “State Property” Thanks to GOP

“More than 100 million women and queer folks with uteruses too, woke up to another day in America, basically as state property in the more than 20 fully or partially Republican-controlled states that the Supreme Court’s conservative majority unleashed to literally take physical control of half the population.”
— Host Joy Reid on MSNBC’s TheReidOut, July 5.

“Just hours after the Supreme court handed down its decision in Dobbs v. Jackson Women’s Health, overruling the nearly 50-year precedent set by Roe v. Wade, Missouri became the first state in the nation to ban all abortions….There is an irony that Missouri so eagerly participated in the reversal of the right to choose abortion. The state is the site of the Supreme Court’s most infamous decision declaring that a group of people did not have foundational rights, Dred Scott v. Sandford….Since last week’s decision by the court to reverse Roe v. Wade, many progressives have revived this Dred Scott conversation, but this time arguing that future generations will look back on Dobbs with the same disgust that is now reserved for Taney’s 1857 opinion.”
— Former MSNBC host Melissa Harris-Perry on NPR’s The Takeaway aired on WNYC Radio, July 7.

“We are in Handmaid’s Tale territory here. We are turning into Gilead. And if there are people out there who are upset by the Supreme Court decision, by what Republican legislators around the country in states and localities are doing to further restrictions and bans on abortion, I don’t know what else could push people to the polls more than not just being stripped of a constitutional right, but having your right to — right to freedom, right to privacy, right to liberty not just taken away, but local officials doing everything they can to ensure that you don’t have autonomy over your own body. If that doesn’t get people out to the polls, I don’t know what will.”
— Washington Post Associate Editor and PBS contributor Jonathan Capehart on PBS NewsHour, July 15.

Substitute host/New York Times columnist Charles Blow: “The abortion case is essentially a privacy case. What is the future of privacy rights in a post-Roe world?”
MSNBC Legal Analyst Glenn Kirschner: “Oh, I think privacy rights will be all but abolished. Whether it’s gay marriage. Whether it’s interracial marriage, which I think might qualify as irony for Justice [Clarence] Thomas. Whether it’s contraception. And, I don’t believe for a minute they’re not going to come after desegregation.”
— MSNBC’s The Sunday Show with Jonathan Capehart, July 3.

“If you go back to the Dobbs decision people need to understand that the premise that life begins at conception is an overtly religious belief, it is a Christian fundamentalist belief….We have tried doing the new world the way [GOP Congresswoman] Lauren Boebert suggests you know where it got us? To the witch trials. You know what happened? People died!....With this Court, we are not far away from that again.”
— The Nation justice correspondent Elie Mystal on MSNBC’s The ReidOut, July 11.

Corporations Must Choose, Dance With the Pro-Life “Devil” or Pro-Abortion “Lord”

“As the country begins to grapple with the realities of Roe v. Wade being overturned, some companies have seemed to be stepping up. AT&T, Disney, Microsoft, and Amazon are all among those who have publicly pledged to cover their employees’ travel expenses so that they can access abortions uninhibited. But all four companies have also donated to supporters of state abortion bans, the very laws that will make such travel necessary….What role does the private sector play in even creating this landscape, and what’s their responsibility in fixing it? Because you can’t dance with the Devil and the Lord at the same time.”
— Host Tiffany Cross on MSNBC’s The Cross Connection, July 2.

Will Biden Campaign Against the “Priests in Black Robes?”

“When you talk to Democrats who are younger, you talk to Democrats who are more progressive, there’s a sense that the party should get out there and run against these sort of priests in black robes and there’s a lot of questions about whether [Joe] Biden is going to be up for doing that….Is he going to be comfortable going to these swing states in the fall and campaigning against the Supreme Court institutionally as a malignant force in the country?”
— New York Times reporter Alex Burns on ABC’s This Week, July 3.

“How long before an American woman is prosecuted for an abortion?...What’s even worse than a woman prosecuted for a miscarriage or stillbirth? Death. In states with strict abortion laws, doctors may hesitate before offering essential lifesaving measures when a woman is bleeding out during a miscarriage. Because remember, the doctors face fears of prosecution, too.”
— Host Joy Reid on MSNBC’s The ReidOut, July 6.

“Even in some countries that embrace authoritarianism, and have horrible records on human rights and the treatment of women, abortion is still available on request….The right to an abortion, a woman’s right to control her own body, no longer has blanket Constitutional protection in America which means that women have rights in China and North Korea that they do not have in the United States of America.”
— Host Ali Velshi on MSNBC’s Velshi, July 2.

“I wanted to read something someone handed me….‘He [President Joe Biden] didn’t have to go to Saudi Arabia however to find a country that’s violating human rights or a country that’s opposing women because plenty of states that we live in are doing the same thing. Remove protected rights from women, disallowing them control over their bodies.’ So, I just want to say, you know, I think part of the big problem that we have is our own hands are dirty quite often.”
— Co-host Whoopi Goldberg on ABC’s The View, July 18.

Wishing “Hell” on Conservative Justices, Even After Threat to Kavanaugh

“It is insane that a Supreme Court that doesn’t represent a majority of Americans will cause women more death and suffering….I can’t describe how painful it is to be here now in a place where the Supreme Court has the power to erase 50 years of constitutional law. Make no mistake, this is not where it ends. Conservatives will not rest until they have come for all of our rights. Everything we have fought for will be lost unless we take it back. It’s not just about voting in November. It’s about doing everything in our power to protect and help vulnerable people access abortion across state lines. And we have to raise hell in our cities, in Washington, in every restaurant Justice [Samuel] Alito eats at for the rest of his life, because if Republicans have made our lives hell, it’s time to return the favor.”
— Host Samantha Bee on June 24 Twitter promo for TBS’s Full Frontal.

“I have thoroughly enjoyed my time guest hosting. But just like women’s rights, all good things must come to an end….Ever since the Supreme Court struck down Roe v. Wade, urologists have seen a spike in vasectomies. This just goes to show you that men really will do anything to avoid wearing a condom. I’ve never personally performed a vasectomy, but I’d like to try my very first one on [Supreme Court Justice] Samuel Alito.”
— Former Netflix and E! host Chelsea Handler substitute hosting on ABC’s Jimmy Kimmel Live!, June 30.

“Overturning Roe might not be the Supreme Court’s only kick to your groin, because in a concurring opinion, Justice Clarence Thomas said the Court should also revisit decisions on the right to contraception, the right of gay couples to marry, and the overturning of sodomy laws. Which, among other things, would ban oral sex. And in response, I just want to say, Clarence Thomas can suck it.”
— Host Stephen Colbert on CBS’s The Late Show with Stephen Colbert, June 30.

“This [overturning of Roe V. Wade] makes the Court a cynical pursuit. It feels like the Fox News of justice….the reason they call themselves Originialists is the same reason they quote the Bible. It’s dogma. It’s dead people. It’s people you cannot argue with….It’s fundamentalism. It’s saying this text is sacrosanct….Now they’re just a thumb on the scale….for one particular side….If a state decides the woman who is having a baby is not as important as the potential of that life, what they’re really saying is, to save a life autonomy means nothing. So let’s play that out. We have an organ shortage in this country. Organ donations save lives. Under this how could they not go to a person and say ‘give me one of your kidneys, because it’s gonna save this person’s life?’ It would be consistent.”
— Former Comedy Central’s The Daily Show host Jon Stewart on his The Problem podcast, June 30.

“Happy ‘Independence’ Day from me and my reproductive rights.”
— July 4 tweet by actress Jessica Chastain.

“‘Baby you’re a firework’ is a 10 but women in the US have fewer rights than an actual sparkler smh.”
— July 4 tweet by singer Katy Perry.