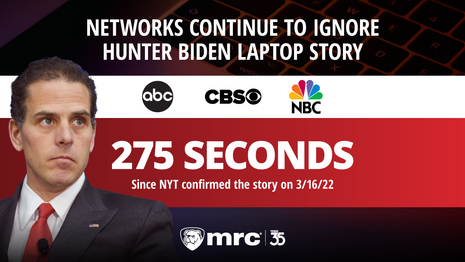 UPDATED THROUGH THE MORNING OF MAY 26:

On March 16, The New York Times belatedly confirmed that Hunter Biden’s laptop is real and not an example of “Russian disinformation.” If the liberal broadcast networks were waiting for an all-clear to admit the explosive Hunter Biden laptop story (that was first broken by the New York Post way back on October 14, 2020) was real and legitimate, this was it.

Still it’s been mostly silence from the networks. Since publication of that New York Times story the Big Three (ABC, CBS, NBC) networks on their evening, morning and Sunday roundtable shows have spent a total of 275 seconds (4 minutes, 35 seconds) on it. Of that total, 74 seconds (1 minute, 14 seconds) used dismissive language.

The most recent mention arrived on the May 19 NBC’s Today show in a story by correspondent Hallie Jackson that was prompted by Hunter’s Hollywood lawyer paying off a “multi-million dollar tax bill” the President’s son owed to the IRS. (*see transcript below) The Jackson story also ran on the May 18 NBC Nightly News. That stopped a 47-day long NBC streak of ignoring the Hunter story that went back to a 22 second mention on the March 31, NBC Nightly News.

So far neither ABC or CBS have mentioned the latest Hunter legal news.

The last time Hunter’s laptop scandal was mentioned on CBS (36 days ago) arrived on the April 20 edition of CBS Mornings during an interview with Comedy Central’s The Daily Show comedian Jordan Klepperer about his upcoming special on CPAC in Hungary. Co-host Gayle King and Klepperer seemed upset that the Hunter Biden laptop scandal was still a topic of conversation EVEN in Hungary. Total time on laptop in that segment = 30 seconds.

Since the March 16 Times piece was published (71 days ago) ABC has yet to utter the word “laptop” in relation to Hunter.

In fact ABC has been the most atrocious in censoring the laptop story. They spent 58 seconds on Hunter’s laptop on the October 23, 2020 edition of ABC’s Good Morning America and haven’t mentioned it since then. That’s right, they haven’t brought up the laptop in a whopping 581 days.

The following is the most recent mention of Hunter’s laptop (194 seconds) from the May 19 edition of NBC’s Today show:

HOST CRAIG MELVIN: We’ve got some new developments for you this morning in the federal criminal investigation of President Biden’s son Hunter, his finances and his work overseas. NBC’s senior Washington correspondent Hallie Jackson joins us with more. Hallie, good morning.

CORRESPONDENT HALLIE JACKSON: Hey there Craig, good morning to you! And this morning we’re learning more about the President’s son and the paying off of a multi-million dollar tax bill he owed. Now the open question for both Hunter Biden legally and President Biden politically is whether or not there will be any charges in this federal criminal investigation. With federal prosecutors pouring over Hunter Biden’s finances, investigating whether he violated federal tax law, this morning a representative for the President’s son tells NBC news his IRS bill totaling about $2 million has been paid off. Two people familiar with the matter say the money was arranged by one of the younger Bidens’ new attorneys, Hollywood lawyer Kevin Morris. Best known for brokering a deal for the South Park TV show.

Does paying that tax bill wash away any liability that Hunter Biden may have now?

CHUCK ROSENBERG, NBC NEWS LEGAL ANALYST: Paying the tax bill, if in fact that’s what he did, doesn’t undo the crime. It would be like returning money to a bank that you robbed. You still robbed the bank.

JACKSON: The President’s son and his company brought in about $11 million between 2013 and 2018 working as an attorney, a board member to a Ukrainian gas company accused of bribing a prosecutor and for a joint venture with a Chinese businessman now accused of a fraud, according to an NBC News analysis of a copy of Biden’s hard drive and iCloud account obtained by NBC from a representative for Rudy Giuliani as well as documents released by a Senate committee. During the campaign, then candidate Biden denied his son profited off a China connection.

JOE BIDEN: My son has not made money in terms of this thing about, what are you talking about? China.

JACKSON: The records show Hunter Biden’s company received nearly $5 million in consulting contracts from that joint venture funded by a Chinese energy company. A snapshot of Hunter Biden’s spending shows that for about five months in late 2017 and early 2018, he spent more than $200,000 a month on things like luxury hotel rooms, cash withdrawals, dental work and payments on a Porsche according to documents on the hard drive. A time period in which Hunter Biden has acknowledged struggling with drug addiction. His laptop itself? A subject of controversy after documents recovered from it were brought to light by Biden’s political opponents. And with the chain of custody in question, in 2020, some experts suggested the laptop’s comments bore hallmarks of a Russian disinformation campaign. Since then several news organizations have authenticated many emails from the laptop.

The President has defended his son.

Unidentified reporter: Are you confident that Hunter did nothing wrong?

JACKSON: And Hunter Biden has denied any illegal business dealings.

HUNTER BIDEN: I’m cooperating completely. And I’m absolutely certain, 100 percent certain that at the end of the investigation, that I will be cleared of any wrongdoing.

JACKSON: Experts point out family members of a president who hold no official job in the administration are not bound by any government ethics rules. Hunter Biden’s attorney did not comment on the record and the White House has not responded to our request for comment. Craig?

MELVIN: Our senior Washington correspondent Hallie Jackson for us. Hallie thank you.

For more on how the networks have censored the Hunter laptop scandal story please go here.

Study parameters: From October 14, 2020 (the day the New York Post broke the laptop story) through the morning of May 26, 2022 — a period of 18 months — MRC analysts looked at the ABC, CBS, NBC evening and morning shows and their Sunday roundtable programs. It should be noted this study is looking at revelations that primarily stemmed from the laptop discovery. Stories on the investigation into Hunter’s tax affairs that pre-date the laptop story or later Hunter scandals like his art gallery deal were not included in this study sample.