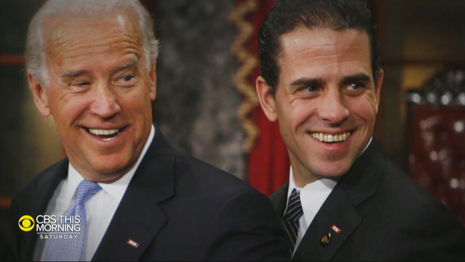 It was a bombshell story that could have swayed the 2020 presidential election.

Just weeks before Election Day, the New York Post printed an explosive story on the morning of October 14, 2020, that alleged Hunter Biden had corrupt business dealings with Ukraine and Joe Biden knew about them.

The Post story was full of stunning revelations. The “No.3 exec” of the Ukrainian firm Burisma (the firm that was paying Hunter $50,000 a month) asked Hunter Biden for “advice on how you could use your influence” to help the company. “The blockbuster correspondence” countered Joe Biden’s assertion that he “never spoken to my son about his overseas business dealings.” The “correspondence” came from emails found in a laptop dropped off at a Delaware computer store. Also found in the laptop was video evidence of Hunter’s “raunchy” sexual behavior and drug use.

The Post dropped another bombshell the following morning (October 15, 2020): “Hunter Biden pursued lucrative deals involving China’s largest private energy company — including one that he said would be ‘interesting for me and my family.’” One of the emails from Hunter’s laptop “outlined a ‘provisional agreement’ under which 80 percent of the….shares in the new company, would be split equally among four people whose initials correspond to the sender and three recipients, with ‘H’ apparently referring to [Hunter] Biden.” The Post reported: “The deal also listed ‘10 Jim’ and ‘10 held by H for the big guy?’” Hunter’s business partner Tony Bobulinski later revealed “the big guy” was a “reference to Joe Biden.”

There would be even more damaging information dug out from Hunter’s laptop. In June 2021 The Daily Mail found texts of Hunter using the n-word multiple times.

These were the kinds of stories that if they were about Donald Trump Jr. would have led broadcast evening and morning shows for weeks.

Broadcast networks systematically buried the devastating laptop story. From October 14, 2020 (the day the New York Post broke the laptop story) through the morning of April 18, 2022 — a period of 18 months — MRC analysts looked at the ABC, CBS, NBC evening and morning shows and their Sunday roundtable programs. That analysis found the total amount of time spent on the Hunter Biden laptop story came to a miniscule 25 minutes, 6 seconds. 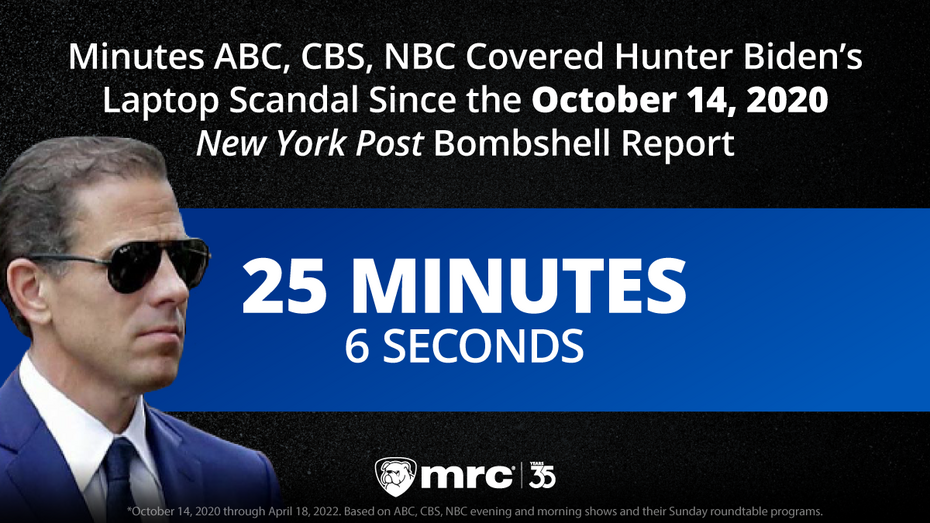 A deep dive of the coverage shows that when the Big Three networks bother to mention the scandal they do so largely to knock it down, using dismissive verbiage like “dubious” “questionably-sourced story,” “old line of attack” and “unverified.”

MRC analysts found arguments by anchors, reporters, guests and talking head soundbites dismissing the Hunter revelations outweighed those supportive of the case by an over 3 to 1 ratio. ABC, CBS and NBC aired a total of 18 minutes, 18 seconds devoted to dismissing the story to just 5 minutes, 1 second of arguments supporting the New York Post revelations. 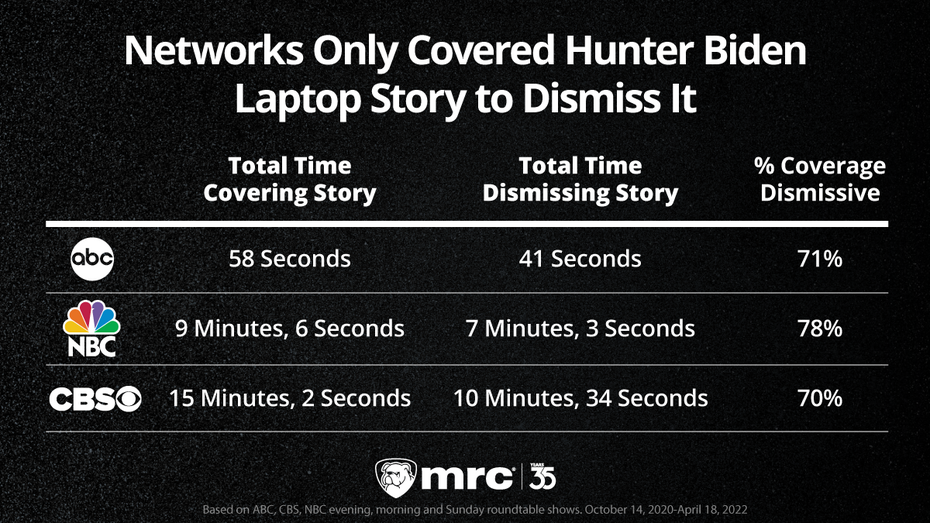 The following is a more detailed timeline of how the broadcast networks have suppressed the story from October 14, 2020 through the morning of April 18, 2022:

April 10, 2021: CBS This Morning correspondent Brook Silva-Braga briefly (26 seconds) brings up the laptop controversy in a story about internet censorship.

That was the last mention on ABC, CBS or NBC of the Hunter Biden laptop scandal on any of the networks as of this publication date (morning of April 18, 2022).

It all worked. Research conducted by The Polling Company for the Media Research Center after the 2020 election found that the media’s censorship of Biden scandals had a significant impact on the election. The survey found that 45.1% of Biden voters in seven key swing states said they were unaware of the financial scandal enveloping Biden and his son, Hunter. According to our poll, full awareness of the Hunter Biden scandal would have led 9.4% of Biden voters to abandon the Democratic candidate, flipping all six of the swing states he won to Trump, which would have given the former president 311 electoral votes.

It should be noted this study is looking at revelations that primarily stemmed from the laptop discovery. Stories on the investigation into Hunter’s tax affairs that pre-date the laptop story or later Hunter scandals like his art gallery deal were not included in this study sample.