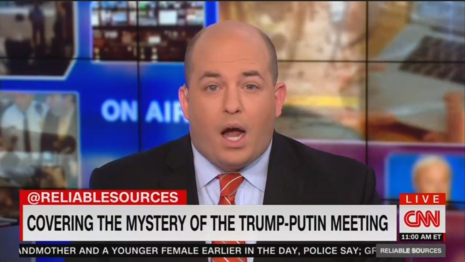 In the wake of Special Counsel John Durham dropping the bombshell report that the Hillary Clinton campaign spied on Donald Trump during the 2016 campaign, will we see members of the leftist media that most vociferously PUSHED the Russia collusion hoax, attack the Clinton camp with the same volume? Don’t bet on it.

The following is a look at some of the most over-the-top instances of liberal journos attempting to bring down former President Trump with disproven claims of an election collusion with Russian President Vladimir Putin:

Mr. President Are You a Russian Agent?

“Mr. President, yes or no. Have you or are you now — have you ever worked for Russia? Yes or no?”
— NBC News White House correspondent Kristen Welker to Donald Trump in a January 14, 2019 confrontation.

“When you look at the 2016 election and you look at how, relatively speaking, it was decided by a handful of votes in a few states, do you think it’s possible that Russia’s election interference actually worked? It actually elected Donald Trump over Hillary Clinton?”
— Co-host Savannah Guthrie to former Secretary of State Condoleezza Rice on NBC’s Today, September 11, 2019.

“Did Robert Mueller deserve better from the President than this kind of language and behavior?...Let’s talk about the President’s behavior....He trashed him [Mueller] for two years....Does he owe Robert Mueller an apology for that kind of rhetoric?”
— Co-host Savannah Guthrie’s questions to White House Press Secretary Sarah Huckabee Sanders as aired on NBC’s Today, March 25, 2019.

“From the time that the Mueller investigation began, President Trump told rally crowds he never conspired or colluded with Russians, and boy, did those crowds believe it. Last night in Michigan, he acted as if the Attorney General’s summary of that underlying report was essentially his Good Housekeeping seal of proof....For a president who loves to tell the nation and the world he’s always right, President Trump relished his first campaign rally after the completion of the Russia investigation. It was a profane victory lap.”
— Correspondent Major Garrett on CBS This Morning, March 29, 2019.

“The White House is spinning it, no collusion, no conspiracy with Russia. What the report did find is that the Russians did, indeed, interfere with our election, with our process of democracy. And that calls into question the very legitimacy of this presidency. And I know they don’t want to talk about that but that was a finding. Mueller did not exonerate this presidency....We really do not know what is in the Mueller report.”
— Co-host Sunny Hostin on ABC’s The View, March 26, 2019.

Joe Cries: There Is More of “Onion to Unpeel”

“If Donald Trump had nothing to worry about all along, why did the President lie about his contacts with Russia repeatedly during the campaign? Why did the Vice President lie about their contacts with Russia in January of 2017? Why did the Attorney General lie in front of the United States Senate about his contacts?... How about the meeting on Air Force One where Donald Trump has everybody around him saying, ‘Okay this is how we’ll lie about our meeting with the Russians?’...There is more of that onion to unpeel.”
— Co-host Joe Scarborough on MSNBC’s Morning Joe, March 25, 2019.

“I want to hear him [Mueller] tell me why the ‘Russia if you’re listening’ speech was....a joke? Did he accept the changing of the Georgian platform as a joke? The handing off of data to Konstantin Kilimnik, a GRU, you know, asset as a joke? Somebody’s got to explain these things. And if it was ‘I couldn’t get a 100 percent slam dunk’ then the Russians have clearly won on a very well planned and coordinated operation, even by Mr. Mueller’s standards.”
— MSNBC counter-terrorism analyst Malcolm Nance on MSNBC’s The Beat, March 24, 2019.

“I was watching Good Morning America this weekend and both mornings they led with snowstorms and scares at malls and other stories and not this [Washington Post and New York Times stories on Russia-Trump]. I just keep wondering if the public is ill-served if we don’t make it really clear what the stakes of this story are. How can a morning show not lead with this drama?”
— Host Brian Stelter on CNN Reliable Sources, January 13, 2019.

“Increasingly to believe that the President isn’t compromised requires such a leap of faith that requires so many coincidences and inexplicable behavioral choices. I think the truth is probably what is right in front of us, which is that Donald Trump was kind of a con man, a third tier failed businessman whose fortunes were rescued by Russian oligarchs....He became president with the direct intervention of Putin. He sees his fortunes as inseparable from Putin’s. We don’t know if Putin is his handler, his hero or his co-conspirator, but it’s obviously where his loyalty lies as opposed to lying with the American people.”
— New York Times columnist Michelle Goldberg on ABC’s This Week, July 22, 2018.

“When historians look back on the Trump presidency they’ll say this was the week that something changed. Something really shifted in the conversations about the President....Trump’s odd behavior with Vladimir Putin is compelling so many people to ask: ‘What does Putin have on Trump? Has Trump been compromised?’ All of those people, those experts, those reporters, they are looking at the fact pattern and seeing something strange, even sinister.”
— Host Brian Stelter on CNN’s Reliable Sources, July 22, 2018.

Putin “Weaponized” Trump to Do His Bidding

“You know, in bio technologies, there’s a notion of having a virus that can go in and rip apart DNA of something and change the entire genome of an organism. It’s as if Donald Trump has been weaponized over the years by Vladimir Putin to go in and do Putin’s bidding, to change the genetic code of NATO, of the Republican Party of the United States, of democracy. And it is astonishing how he has become such an effective and destructive virus created by Vladimir Putin.”
— Former Time editor Walter Isaacson on MSNBC’s Morning Joe, July 23, 2018.

“Disturbed” Trump Is Either “Compromised” By Russia or a “Towering Fool”

“Our President is a disturbed person, and he’s behaving in ways that are simply inexplicable that tell you that he is either compromised because the Russians have been funding his company in ways that he’s, he would find embarrassing if publicly disclosed....Or he’s compromised because of, maybe, behavior he engaged in while in Moscow, or he is simply a towering fool who is ignoring the advice of his intelligence chiefs being made in public.”
— New York Times columnist Thomas Friedman on CNN New Day, February 21, 2018.

“On one side, we have a very politically motivated media, Fox, Breitbart, Infowars, et cetera, that are pushing a dishonest narrative, frankly, that is politically motivated. And on the other side, we’re trying to be like, well, we’re not on any side, here are the details. And I think people’s eyes glaze over....That’s part of the problem, is that one side is very politically motivated. And the other side, you and myself included, are trying to stick to the facts. And the facts get more and more conflicted as – you know, with every day.”
— The Atlantic’s Julia Ioffe, discussing coverage of Russian “collusion” story on CNN’s Reliable Sources, February 4, 2018.

“Trump has brilliantly changed the subject from ‘Is he a Russian intelligence asset’ to ‘Is he a dangerously violent lunatic?’”
— July 2, 2017 tweet by The Atlantic senior editor David Frum, in reaction to Trump tweeting out video of him clothes-lining a man in a suit with CNN superimposed on his head.

“A flurry of unfounded allegations clutter our news feeds. Susan Rice. Wiretapping of the Trump team by President Obama. The latest Fox News induced Twitter rant. The smoke machine is turned on. There’s a trained monkey dancing in the corner. The magician is buckling his cufflinks. The misdirection meter is turned up full. We cannot let ourselves be distracted....We know that Russia – led by a former KGB agent - actively worked to undermine our election. We know that there are serious investigations into collision [sic] between Trump associates and Russian operatives. That is the story. Everything else is just noise and dust until proven otherwise.”
— Disgraced former CBS Evening News anchor Dan Rather in an April 5, 2017  Facebook post “The Dangers of Distraction.”

Worse than Watergate and Iran Contra

“Watergate is the biggest political scandal of my lifetime, until maybe now. It was the closest we came to a debilitating Constitutional crisis, until maybe now. On a 10 scale of armageddon for our form of government, I would put Watergate at a 9. This Russia scandal is currently somewhere around a 5 or 6, in my opinion, but it is cascading in intensity seemingly by the hour. And we may look back and see, in the end, that it is at least as big as Watergate. It may become the measure by which all future scandals are judged. It has all the necessary ingredients, and that is chilling.”
— Disgraced former CBS Evening News anchor Dan Rather in a February 15, 2017 Facebook post.

“So this was a tainted election. It was not, as far as we can tell, stolen in the sense that votes were counted wrong, and the result won’t be overturned. But the result was nonetheless illegitimate in important ways; the victor was rejected by the public, and won the Electoral College only thanks to foreign intervention and grotesquely inappropriate, partisan behavior on the part of domestic law enforcement. The question now is what to do with that horrifying knowledge in the months and years ahead.”
— New York Times columnist Paul Krugman, December 12, 2016.

Host John Dickerson: “We heard about Russian involvement potentially while the election was going on, but what seems to be new is that it was targeted to help Donald Trump....”
Slate writer Jamelle Bouie: “It really is unprecedented. And if — if it is true, if we have further verification of this, then what it suggests potentially is that the election was in some sense illegitimate. And I don’t know where you go from there.
— CBS Face the Nation, December 11, 2016.

“Biggest winner? Vladimir Putin. He did it. He did it. He did what Gorbachev couldn’t do, what Castro couldn’t do. He basically took over the United States and got himself a Manchurian candidate and that is something no other Russian leader has been able to do. He’ll be cheering about this and it will be in history books for the next 50 years. It’s a coup. It’s an amazing coup.”
— The Root’s Jason Johnson on MSNBC’s Hardball, December 21, during a segment on the biggest winners and losers of 2016.

Bill Can’t Believe It, There Has to Be More

“It doesn’t quite make sense to me....It’s like one of those movies, you know, where they seem to be wrapping it up. Seems to be over. Case closed. We caught the killer....Wait, there’s 15 minutes left....I feel like there’s a final scene where Mueller goes home, and he puts his briefcase down and he sits down to dinner with his wife – who is Roger Stone. And he’s cooking a meatloaf while he’s talking on the phone in Russian to Vladimir Putin.”
— Host Bill Maher on HBO’s Real Time, March 29, 2019.

“This is a high-tech coup....William Barr, he’s a stooge. This is what Third World countries do. The dictator appoints somebody who exonerates him. That’s what happened here....I don’t think just because it’s Bob Mueller we have to take it on faith. Let me read Jeremy Bash, I thought what he said the other day was great. ‘The president requested Russian assistance, he received Russian assistance, he benefited from Russian assistance and he rewarded Russian assistance.’ And his son met with Russians, who were selling them dirt. And his campaign manager went and gave polling data to a Russian oligarch who was in tight with the Kremlin. Tell me why that’s not collusion? Of course that’s collusion. I don’t get it.”
— Host Bill Maher on HBO’s Real Time, March 29, 2019.