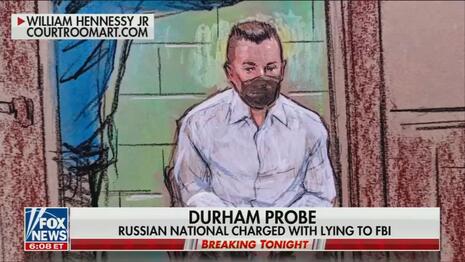 The media obsession over the Steele dossier and the ensuing investigation over it dominated their coverage of the first few years of the Trump administration. The ABC, CBS, NBC evening news programs (January 20, 2017 - July 20, 2019) alone devoted an astonishing 2,634 minutes to it.

But now another pillar has fallen in the Russian collusion hoax.

On Thursday, Special Prosecutor John Durham brought Russian national Igor Danchenko — who was the primary source in the infamous and debunked dossier — into court on charges of lying to the FBI with his information.

So how much time have the broadcast evening news shows (ABC’s World News Tonight, CBS Evening News, NBC Nightly News) spent on the Danchenko indictment from November 4 through November 8?

On Sunday, journalist Glenn Greenwald underscored the media’s complicity: “So, the fact that what we’re learning isn’t just that the dossier was false but it was a deliberate fraud perpetrated by people in the Clinton world working with their media allies to spread this lie during the election implicates the entire media.”

Zero seconds is a far cry from the exhaustive amount of time the evening nets initially spent on what turned out to be a total hoax.

The Russia Collusion Cloud: During the President’s first year in office, one-fifth of all broadcast evening news coverage was spent on the Russia investigation, wrapping Trump in a perpetual cloud of suspicion and stealing valuable airtime away from key administration initiatives. By the time it ended in 2019, those three newscasts alone had spent an astounding 2,634 minutes on the Mueller probe, yammering endlessly about a “constitutional crisis” even as they buried crucial questions surrounding the investigation’s bias.

While The Big Three evening news and also morning shows (ABC’s Good Morning America, CBS Mornings, NBC’s Today) have yet to cover the Durham indictment, FNC has been covering the latest developments.

On the November 7 edition of FNC’s MediaBuzz, host Howard Kurtz and Pulitzer Prize-winning journalist Glenn Greenwald underlined how devastating Danchenko’s arrest is to the media’s credibility:

GLENN GREENWALD: They’re just ignoring these indictments and the content of them that demonstrates that the entire narrative with which they were obsessed for four years -- that Trump was controlled by Putin through blackmail -- was an out and out falsehood, a fraud.

HOWARD KURTZ: Yeah I mean, the New York Times did break the story about the indictment and The Washington Post, and I was careful to give credit on a Special Report the other night, had this sentence. “The allegations cast new uncertainty on some past reporting on the dossier by news organizations including The Washington Post.” But that little bit of a mea culpa aside. What does this say about the media mindset that ABC NBC, CBS on their evening newscasts didn’t devote one second to these criminal charges against Danchenko for lying to the bureau?

GREENWALD: So, what they’re trying to do, Howie, their strategy is to pretend that this is only about the Steele dossier which was covered only by cable crazies like Rachel Maddow and people like that, they’re kind of trying to scapegoat her and pretend that the real serious journalistic institutions like The New York Times and the Post that gave Pulitzers or were given Pulitzers for this story were actually serious journalists who didn’t fall for any of this.

But the reality is, as Michael Isikoff who is one of the first journalists to push the Steele dossier admitted, to his credit, it was this dossier that set the expectations, the entire framework for how this entire scandal was understood. That there was this ongoing explicit cooperation criminally between the Trump world and Russia to interfere in the election that the Kremlin controlled Donald Trump and for that reason could get him to do whatever they wanted.

It emanated from the narrative of the Steele dossier and everything that followed from that came from this dossier. So, the fact that what we’re learning isn’t just that the dossier was false but it was a deliberate fraud perpetrated by people in the Clinton world working with their media allies to spread this lie during the election implicates the entire media. And one little sentence buried in the Washington Post article, “Oh this calls into question some of our past reporting.” I guess it’s better than nothing but it’s kind of shocking that that’s all they are going to do in passing -- is just to say “Yeah, I guess it maybe actually shows that much of what we said was wrong.”

KURTZ: Well, at least it was the lead story in The Washington Post the other day. Look, a lot of people is eyes glaze over when we talk about the Steele dossier by experts by Christopher Steele. I mean, it was BuzzFeed that put this out there not knowing whether it was true or not back in 2017.

But it contained these totally salacious and totally unverified allegations about Donald Trump including about prostitutes and so forth that kind of made it into the media culture even for people who don’t even know what the Steele dossier is.

GREENWALD: I mean, it, Howie, it was the number one most covered story of the Trump presidency without any close --

GREENWALD: The idea that Trump collaborated with the Russians.

GREENWALD: Russia-gate and that Russia had controlled over Donald Trump, an extremely serious allegation to say that Moscow and the Kremlin had infiltrated our institutions. So, you can slice it up however you want, we didn’t talk about the Steele dossier, we only talk about -- but the overall narrative of the Trump presidency that came from the liberal sector of the media is proving to be a fraud and not an innocent one but a deliberate and coordinated one that came from a union between Clinton operatives, the security state services, the FBI and the CIA, and the corporate media. Those are the guilty parties that drowned our politics in this fraud for three or four years.