DOUBLE DISASTER: CNN’s Chris Cuomo Is an Ethical Mess AND a Left-Wing Hack

Below is the original article looking back at some of Cuomo's worst moments, as posted on August 9. 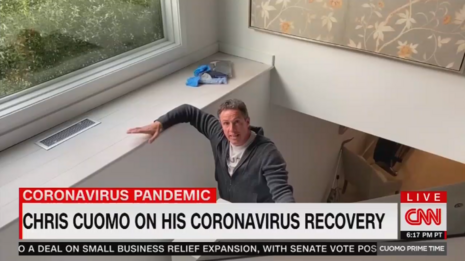 What in the Hell is CNN doing? One of their primetime anchors, Chris Cuomo, can’t report on one of the hot news items of the day because he is ethically compromised by his blood relation.

On August 3, a report from New York’s attorney general corroborated previous reporting that the CNN anchor had secretly advised his embattled brother, Governor Andrew Cuomo (D-NY) in his maligning of sexual assault victims.

Despite growing calls for his firing (even from Keith Olbermann) CNN keeps Cuomo employed. This isn’t even Chris Cuomo’s first embarrassing ethical stumble.

In April 2020, Cuomo valiantly strided out of his basement on live TV after being quarantined from his family -- at least that’s what he would have his viewers believe. His “official” release came over a week after Cuomo was caught outside with his family as he berated a 65-year-old cyclist who called him out.

There were also all the times he brought on Florida Department of Health website director Rebekah Jones to claim she was fired for disobeying orders to manipulate COVID data. And since she was attacking Republican Governor Ron DeSantis, Cuomo eagerly promoted her claims as it provided a distraction from his brother’s own COVID data manipulation. That was, until he dropped her once she got arrested.

So why on Earth does CNN retain him? Because he is really good at one thing: Carrying the Left’s water.

Shameless: Cuomo Pushes His Own Brother to Run for President, Bash Trump

“With all of this adulation you’re getting for doing your job, are you thinking about running for president? Tell the audience.”
— Host Chris Cuomo to his brother and New York Democratic Governor Andrew Cuomo on CNN’s Cuomo Prime Time, March 30, 2020.

“The only consensus there is, is in a canard, and here it is: ‘First, I would like to offer thoughts and prayers,’ because that’s what you do when you offer thoughts and prayers. You mock those who lost loved ones because if you gave it any thought at all, you would never walk away from any of these without figuring out a better way to deal with them. And prayer – you think leaving it to God is the answer? We pray for strength.”
— Host Chris Cuomo on Thousand Oaks, California bar shooting as aired on CNN’s Cuomo Prime Time, November 9, 2018.

“Here we are on the 100th anniversary of the Tulsa Race Massacre, the deadliest attack on black Americans on U.S. soil....And at the same time that we condemn this as obscene, as a reminder of what is wrong, we see in real time today one of the greatest assaults on democracy under way once again targeting minorities. The party of Trump intensifying its efforts to strip people of color of their rights to vote. The boldest attempt since the era of Jim Crow.”
— Host Chris Cuomo on CNN’s Cuomo Prime Time, June 1, 2021.

Just Say It Mr. Congressman, the President Has “Hate In His Heart” for Black People

“You think this President [Donald Trump] has hate in his heart for people like you and for the idea of justice and society for all?”
— Host Chris Cuomo’s questions to Democratic Congressman Jim Clyburn on CNN’s Cuomo Prime Time, July 31, 2020.

“Why do you [Republicans] bring back the most odious laws suppressing the black vote, almost by design, since Jim Crow? You want a nice activity? Google ‘Jim Crow Laws’ in states where they existed and compare them to the language, phraseology, and the intention of what’s sold in over 40 states right now, some 250 plus bills. Take a look and be shocked at the similarity….This is becoming some kind of perverse holy war for you guys.”
— Host Chris Cuomo on CNN’s Cuomo Prime Time, March 15, 2021.

“Trump didn’t get us here alone. Think about those who remain, who’ve sent every signal that they want to be every bit of his animus and more….Who does all of these things unless you want chaos? GOP used to stand for ‘Grand Old Party.’ Now, it’s like ‘Gang Of Pirates.’”
— Host Chris Cuomo on CNN’s Cuomo Prime Time, January 27, 2021.