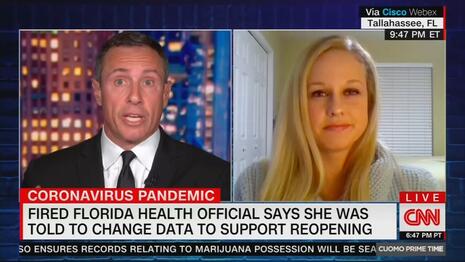 Last year, a website operator for the Florida Department of Health, Rebekah Jones became the liberal media’s new Michael Avenatti when she started claiming she was fired for disobeying orders to manipulate COVID data. And since she was attacking Republican Governor Ron DeSantis, CNN Prime Time host Chris Cuomo eagerly promoted her claims as it provided a distraction from his brother, Governor Andrew Cuomo’s (D-NY) own COVID data manipulation. That was, until he dropped her once she got arrested.

Jones was back in the news Thursday after National Review's Charles C. W. Cooke published a brutal takedown of her claims, actually detailing how and why she was fired. So, NewsBusters thought this was the perfect time to look back at how Chris “Fredo” Cuomo rolled out the welcome mat for the lunacy several times over the course of 2020.

The first time Jones was welcomed onto the show to “get after it” was on May 22, and Fredo approached the story with ZERO skepticism and gave her the floor to spout off. “Jones says she spearheaded the launch of Florida's COVID- 19 data portal. She says she was fired after she was, quote, asked to manipulate, delete and hide data, and refused to do so,” he told his audience.

Cuomo didn’t take the opportunity to scrutinize her claims. He instead offered her a platform to spew them with his aid (click “expand”):

CUOMO: So, the simple question is, what exactly were you asked to do that was so unusual, and improper and, in your opinion, wrong.

JONES: Well, the first time I was asked to do something improper was in April. And when I brought basically what the results of whether or not each county could open, to superiors, they essentially told me they did not like the results. The results did not match --

CUOMO: How so? What does that mean they didn't like? Help us understand.

JONES: -- the results didn't match the report for reopening that had already been written, basically saying that a lot of rural counties, because of a wide range of reasons, didn't meet the criteria that the State had outlined in order to qualify for reopening whereas some more populated counties did meet that criteria.

And I was told that specifically, and this is a quote, "We can't tell Jackson and Franklin County that they can't reopen, but Broward and Miami-Dade can."

Back in reality, Cooke later reported: “Her personnel file shows, not only was there no cover-up but the agency did everything it could to de-escalate the situation around this employee before it eventually became untenable.”

On top of that, she wasn’t the “data manager” she was telling the press she was. The facts showed she only had access to the website and had no access to the raw data she claimed to have been ordered to manipulate. And in retaliation for her officials telling her to stop posting the wrong data, she crashed the site and locked out the real administrator.

But Jones's unfounded claims helped to fuel Cuomo’s attacks against DeSantis as his brother’s nursing home deaths and cover-up scandal were heating up. Throughout the summer, he would make snide comments about how government officials don’t hide data for good reason. “Can we trust the data from florida’s [sic] governor,” he tweeted in late July (and again in December).

On August 31, Cuomo brought on Jones to promote her new website that supposedly showed the real COIVD data. Calling her a “whistleblower” that was bringing “reality” with her, he boasted: “She's also launched a tool that may be the first and certainly the best of its kind to do something that nobody else is going to do for us, track COVID-19 cases in school K-12 all around the U.S. How could we not have that? Why did she have to do it?”

But again, Cooke had the truth: “She is using precisely the same FDOH data used by everyone else in the world. Yes, you read that right: Jones’s ‘rebel’ dashboard is hooked up directly to the same FDOH that she pretends daily is engaged in a conspiracy.” So, for all of Cuomo’s bluster about how she was doing something no one else would, he didn’t have a clue about what he was saying.

And during the fall (November 23), Cuomo tried to turn her into an education expert (click “expand”):

CUOMO: So, the supposition is why do we keep closing down schools, when the rate is so much lower than it is in the rest of the communities? For example, New York City, they just hit the 3 percent mark. But the schools are only 0.17 percent. Why shut down our schools? You are saying I have my facts wrong.

JONES: Well part of the reason of shutting down a school or school system is to prevent the case rate from getting higher. If you allow the case rate to become high, then you have acted too late. So, that is a preventive measure. It is actually pretty smart, and I stand with the New York City school system for doing that.

Things really heated up after Jones’ home was the subject of a search warrant when it was discovered that a data breach of the state Department of Health “in which the personal information of 19,000 employees was stolen—was traced back to the IPv6 address that Comcast had assigned to Jones’s house,” as reported by Cooke.

Of course, Cuomo rushed the Jones’ defense with all of his indignation aimed at authorities because of his deep-seated and seething hatred of Republicans and Governor DeSantis, who was still outperforming his brother. “Why do they think Jones hacked a system that could be accessed by the public,” he tweeted.

He even pushed the false claim that the police (or “Gestapo” as Jones called them) pointed guns at her kids. “But, at this point, Jones comes to the door, and one officer is seen pulling out his weapon. Keep in mind, we don't see bodycam footage from the officer who pulled his weapon, or when he entered the home with the gun out,” he described the video on December 10.

That was the last time Fredo brought Jones on or even brought her up (and for all of CNN for that matter, according to a Nexis search) with no explanation why. And the reason why proved just how sleazy and insidious CNN was.

According to Cooke, police found “enough of what they were looking for in Jones’s home for another Leon County judge, Nina Ashenafi Richardson, to sign a warrant for her arrest. In January, Jones turned herself in. She is currently awaiting trial.”