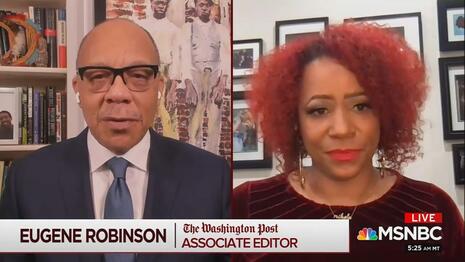 It didn’t matter that most Republicans and conservatives decried the horrible January 6 Capitol Hill riots. Liberal journalists nevertheless exploited the event to target them as “cultists” who needed to be “deprogrammed.”

This was all in addition to the hype journalists gave the incoming Biden administration that can be found here.

The following are some of the worst (non-Inauguration) outbursts from liberal journos (and celebrities) over the last month.

How Do We “Deprogram” Millions of Racist, Violent Trump Cultists?

“The Klan was lower income, the white Citizens’ Councils were the Josh Hawleys and Ted Cruzes of their day. Here’s the situation, though….There are millions of Americans, almost all white, almost all Republicans who somehow need to be deprogrammed….It’s as if they are members of a cult, the Trumpist cult and they have to be deprogrammed. Do you have any idea how we start that process? Much less complete it?”

“How are we going to really, almost deprogram these people who have signed up for the cult of Trump?”

“Trump will be an ex-president in 13 days. The fact is that getting rid of Trump is the easy part. Cleansing the movement he commands is going to be something else.”

If You Voted For Trump, You Are On The Same Side as the Klan

Time to Censor the Conservatives

“The story this week was bringing our informational crisis to the forefront. It’s a national emergency. You have corporations and people that are profiting off lies and conspiracy theories, whether that’s big tech, whether that’s Fox News, whether that’s TV providers that beam OAN and Newsmax into homes, or Rush Limbaugh. There are a lot of people profiting off of lies and conspiracy theories, and I don’t really see how things get better, how we move on as a country until this informational environment is cleaned up.”

“I wonder if you think, fundamentally, capitalism needs to change and, if you do, what the Biden administration plans to push for on that front?”

“Donald Trump had a role model for his exploitation of the class divide. Sarah Palin, who did it first….Before there was a Donald Trump, there was a Republican pioneer [Newt Gingrich] who paved the way for the Trump brand of destructive politics....His legacy has been both dark and far reaching: A permanent state of war between the parties.”

— Host Fareed Zakaria on CNN’s The Divided State of America: What is Tearing Us Apart?, January 31.

“Yesterday, Democratic Congresswoman Alexandria Ocasio-Cortez tweeted about the GameStop story, saying Robinhood’s decision to block retail investors was unacceptable. Republican Senator Ted Cruz said he fully agreed with her stance. But Ocasio-Cortez wants nothing to do with him. Firing back on Twitter,  quote, ‘I’m happy to work on Republicans on this issue where there is common ground. But you almost had me murdered three weeks ago so you can sit this one out. Happy to work with almost any other GOP [sic] that aren’t trying to get me killed. In the meantime, if you want to help, you can resign.’ So Michael Steele, I think that’s kind of a fair response.”

“Trump didn’t get us here alone. Think about those who remain, who’ve sent every signal that they want to be every bit of his animus and more….Who does all of these things unless you want chaos? GOP used to stand for ‘Grand Old Party.’ Now, it’s like ‘Gang Of Pirates.’”

She Said That With a Straight Face

Co-host Sara Haines: “Do you think the media will hold President Biden to the same level of scrutiny? “

ABC chief White House correspondent Cecilia Vega: “I do. You know, President Trump did that [calling the press “fake news” and “enemy of the people”] not just when we were questioning him, but this was his M.O., he said he tried to discredit us because it helped him politically. I don’t think you’re going to see that from Biden. That’s just not his personality….But that doesn’t mean he’s in any way going to get any kind of free pass or even frankly a honeymoon.”

“Congressman Brian Mast, a Republican from Florida, who lost his legs, by the way, fighting for democracy abroad, although I don’t know what his — I don’t know about his commitment to it here in the United States.”

“Donald J. Trump, who dragged this country through four long years of horror, from caged children, Nazi coddling, open white nationalism, and open corruption, who profited off the presidency that he gained with foreign help and then humiliated himself and us before the ex-KGB agent who helped put him in the White House, and who fired the FBI director who caught him, who sat back and did absolutely nothing while more than 370,000 Americans died in a global pandemic, that guy has been impeached for the second time in a year.”

“There is not a single member of the Republican Party who cared at all about unity when Donald Trump waved his misogyny flag or waved his racism flag, or waved his ‘reporters are the enemy of the people’ flag. He sought to divide people on an hourly basis on his Twitter feed. So the excuse for not doing something, cannot be, most not be, from any Republican that unity is now today their priority. They’ve made clear they don’t care and that disunity has been their strategy.”

Conservatives Like Rush Limbaugh Have Been “Tearing Things Down for Decades”

“There are voices, very loud, prominent, influential voices, that have spent decades tearing down trust in our institutions, tearing down education, tearing down facts, tearing down the media, et cetera, and you don’t build that back overnight….Most importantly, the conservative media, people like Rush Limbaugh, people on Fox News, the ones who have been tearing things down for decades for their own benefit.”

Trump Assaulted the USA for For Four Years

“This man, this Trump, he made it his business for four years to rape this country. It’s disgusting, and I’m so happy to have somebody who cares about the children back.”

If It Is An Awards Show, There Must Be At Least One “Trump Is Hitler” Reference

“This president Agent Orange will go down in history with the likes of Hitler.”

Jimmy’s Not So Subtle Word Play

“Trump Administration resignations are piling up. They did not see this coming. They’re Not-sees.”

Country Has Gone to BLEEP Under Trump

Host Stephen Colbert: “So what have you been doing the last five years? What’s been going on?

Actor George Clooney: “Nothing. You know, nothing. Watching our country go to [bleep]. Let’s see, what else? No, that’s about it, that’s pretty much it.

Colbert: “That does grab the focus by the — by the short hairs.”

Clooney: “Yeah. By the short hairs is exactly — you know, it’s — you know, when you get to the point where the leader of the free world is calling the press ‘The enemy of the people,’ you know, it starts to cause concern. I’m excited about the next four years.”

“Who arrests Trump if he refuses to concede? Who drags him out? Pepper spray? Cuffs?

A knee on his neck, cutting off his oxygen? Does he wheeze ‘I can’t breathe.’ Just whale away on him like a piñata? Rodney King style? The thug who has destroyed the country. What does he deserve?”