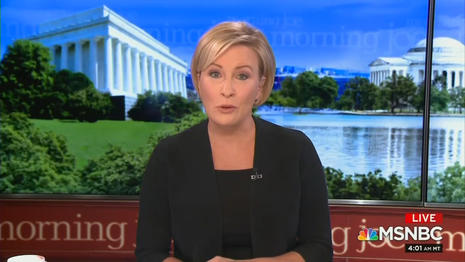 Lefty reporters and hosts have devoted the last two weeks to depicting Donald Trump as a racially divisive President who is going to get “everybody” killed from coronavirus, while portraying Joe Biden as the enlightened alternative to the President’s message of “hate.”

The following is a top 12 countdown of the most vicious anti-Trump attacks from the ultra-left media from the last two weeks:

“[Trump] he hasn’t been sending dog whistles, he’s using a foghorn to say that he’s dedicated his political strategy, at least for the moment, probably until November, to bet that racial fears will prevail. And therefore he’s taking the attitude that ‘I’m going to do what Richard Nixon did in 1968, what Ronald Reagan did in 1980, what President George H.W. Bush did in 1988, and what I did in 2016,’ and that is play the race card.”
— Former CBS Evening News anchor Dan Rather on CNN Tonight with Don Lemon, June 13.

11. When Trump Is Talking About “Fake News” It Can’t Be Us at CBS

“Our President is often loose with the truth but this is the thing at CBS, what we pride ourselves on is giving you the news and letting you make your own decisions, that said you have to do your own due diligence....I find most viewers who are watching our show are really smart and really very informed. So when I hear him say ‘fake news,’ I just sit there and go oh, is he not talking about us, I never feel that.”
— CBS This Morning co-host Gayle King on CBS’s The Late Late Show with James Corden, June 11.

“We already know where the President’s heart is and his heart is in continued racial division rather than unity. We see that from his summary rejection of the idea of getting rid of Confederate symbols even as conservative institutions like the U.S. military and NASCAR raced passed him to keep up with changing public’s attitude....The President’s impulse, as it’s been throughout his political career is to play to racial division as a source of political strength. That’s why his former Defense Secretary Jim Mattis condemned his approach last week and said it was un-American.”
— Correspondent John Harwood on CNN Newsroom, June 11.

“If Abraham Lincoln is ranked as our top President, you’re looking at Donald Trump on the very bottom of the heap. That might seem like a premature judgment — we are in the middle of an election year — but this, you know, this idea of Trump has of dividing our country — of using racial slurs — of being a leader of birtherism — I mean, he’s more, you know, [American Nazi Party founder] George Lincoln Rockwell than Abraham Lincoln in his behavior….So thank goodness these protesters are starting to stand up and challenge Trumpism which has an aura around it of white supremacy.”
— CNN presidential historian Douglas Brinkley on CNN Tonight with Don Lemon, June 13.

“This President sometimes sounds like a [former segregationist Alabama Democratic Governor George] Wallace or Nixon in his rhetoric. Is what we are seeing on the streets a reaction to him? Or is it a bigger moment and what —  we don’t know what the reaction to it will be. Is that fair?”
— Host John King on CNN Newsroom, June 16.

7. Trump Choosing the “Side of Bull Connor”

“I think that many of us have — have echoed for a long period of time that Donald Trump was going to be on the wrong side of history. And he appears to do so. I mean, you can choose the side of Bull Connor, Lester Maddox and George Wallace if you want to.”
— CNN analyst Bakari Sellers on CNN New Day, June 23.

“‘Shotgun blasts’ [quoting a Trump tweet] to the face of conservatives and Republicans and then warning about the Second Amendment, of course, we just talked about how even with Trump’s two picks the Supreme Court is not even hearing Second Amendment cases that the NRA wants them to hear. But the violent rhetoric is the sort of thing you would expect from a totalitarian leader, from an autocrat trying to, it seems to me, if it’s a stretch let me know, but trying to incite violence against judges.”
— Co-host Joe Scarborough on MSNBC’s Morning Joe, June 19.

5. Biden Has the “Perfect” Counter to Trump’s Message of “Hate”

“Joe Biden has….the perfect message for 2020 of reconciliation, rights, restoring the soul of America….He realized we have one candidate who is a leader who wants to bring reconciliation, and we have a president who wants to Make America Hate Again.”
— Daily Beast columnist and MSNBC analyst Jonathan Alter on MSNBC’s The Last Word with Lawrence O’Donnell, June 12.

4. Biden Is the Enlightened Choice

3. “It’s Not Really In Serious Dispute Anymore” That CNN is Fake News

“It’s not really in serious dispute anymore that President Trump is not up to this job.”
— White House correspondent John Harwood on CNN New Day, June 22.

2. Trump Is Going to Get His Supporters Killed

“Nobody in this country is holding the kind of indoor, large gathering that the President is planning for tomorrow. Not mega churches, not sports leagues. So why put public safety at risk for a political rally?...Let’s talk morally. This is your state, these are your constituents. Have you thought about how you will feel if somebody gets sick or, God  forbid, dies?”
— Co-host Tony Dokoupil to Oklahoma Senator James Lankford on CBS This Morning, June 19.

1. Trump’s “Trail of Germs” Is Putting Americans At Risk

“The trail of germs left in Tulsa after 6,200 people crammed into the lower seats of a convention center is going to be bad enough and now he’s hopscotching around the country, sending a signal that masks are a bad idea. I mean this President constantly is putting American people’s lives at risk as he demands their presence.”
— Co-host Mika Brzezinski on MSNBC’s Morning Joe, June 23.