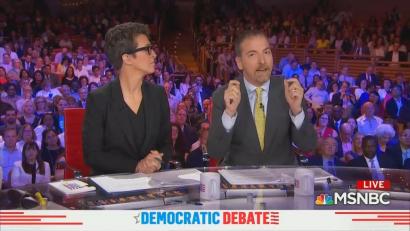 Chuck Todd’s performance at last summer’s Democratic primary debate was so irritating that even fellow liberals like comedian Stephen Colbert panned the NBC Meet the Press host for being a “complete ass” and “a guy who really likes the sound of his own voice.”

But it wasn’t just Todd’s moderating style that was hard to take, it was his obnoxious questions from the left that he posed to the liberal candidates on stage.

During the June 26-27 two night debate, Todd repeatedly prodded the candidates about “gun confiscation,” as he did in this question to Senator Elizabeth Warren: “Even if you are able to implement [an assault weapons ban], what do you do about the hundreds of millions of guns already out there and does the federal government have to play a role in dealing with it?....Do you think the federal government needs to figure out a way to go and get the guns that are already out there?”

He pressed Beto O’Rourke about any plans to punish a former President Trump: “House Speaker Pelosi has publicly and privately resisted any move toward impeachment in the House. If the House chooses not to impeach, as president, would you do anything to address the potential crimes that were outlined in Mr. Mueller’s report?”

Todd also painted Republican Senator Mitch McConnell as a hyper-partisan obstacle that had to be overcome by an incoming Democratic president: “Congressman [John] Delaney, you seem to believe you can do everything in a bipartisan manner. Mitch McConnell doesn’t operate that way. He operates differently. Why do you think he is going to conform to your style?”

Of course, viewers of Todd’s career at NBC News from his days as a White House correspondent to his moderating duties at Meet the Press should not be surprised that Todd behaved in such an obnoxiously liberal way.

The following are just a few examples of Todd’s most liberal moments since Trump announced his candidacy in 2015, as culled from the MRC’s archives:

“I think the thing that’s uncomfortable here is the idea that if you can – if you basically can harness enough support in the public you can bulldoze – you can essentially bulldoze the Constitution.”
— Todd referring to Trump’s acquittal by the Senate during NBC News’s live impeachment coverage, January 31.

Worried That “Guilty” Trump Going To Get Off Like OJ

“I’m having a quick flashback to the O.J. trial, frankly, where the facts were damning, but it didn’t matter. And yet, he was innocent, but everybody knew he was guilty. Are we about to head into a situation like that where he’s going to get acquitted and yet everybody knew he’s guilty?”
— Todd on MTP Daily, November 21, 2019.

Todd Decrees “National Nightmare Is Upon Us”

“Let’s be frank, a national nightmare is upon us. The basic rules of our democracy are under attack from the President....This moment should arguably be a national emergency. The Founding Fathers would have considered it a national emergency if the President publically lobbied multiple foreign governments to interfere in the next election and yet there has been virtually no condemnation from the President’s party at all for this remark which was remarkable considering the precedent it would set and the lasting damage it would do to our democracy.”
— Todd on MTP Daily, October 3, 2019.

Host Chuck Todd: “There’s a part of Biden that seems more Reagan-esque, that way you’re like, ‘Oh, it’s grandpa, it’s Uncle Joe,’ whatever that is. ‘Eh, let the old man do it.’”...
Vice News Washington bureau chief Shawna Thomas: “When Trump lies, it’s about Google and Google changing votes, and making you scared about things. When Joe Biden lies, it’s about trying to say he’s going to be commander-in-chief and he understands heroism.”...
— Discussion about Vice President Joe Biden peddling a false war story at campaign events as aired on NBC’s Meet the Press, September 1, 2019.

Face It, You’re No Obama

“Let me show you this chart. You see that chart? It’s the unemployment rate from the peak of the recession....Your economy is great. I’m not saying it’s not great. But this recovery started and in the 28 months you’ve been president and the last 28 months of Obama’s presidency, he averaged more new jobs than your first 28.”
— Todd’s question to Donald Trump on NBC’s Meet the Press, June 23, 2019.

“[The State of the Union speech] is shaping up to be a night of absurdist theater. Absurd because the White House says the President’s address is going to be about bipartisanship, unity, compromise...Absurd because tonight’s address was delayed because of an act of over partisanship, when the President himself decided to engineer a 35-day government shutdown over a border wall that he promised to his political base....Absurd because the President is seemingly going to act like everything is normal, despite a cracked up cabinet, despite his ongoing feud with the intel community, countless investigations into him, his staff, his campaign, his business, and even now his inauguration.”
— Todd on MSNBC’s MTP Daily, February 5, 2019.

The Real “Crisis” is Trump

“Many have noted, that despite Mr. Trump’s many self-inflicted wounds, his presidency benefitted from not having to face a financial or international crisis. But perhaps now we need to face this uncomfortable question: What if the president is the crisis?”
— Todd on NBC’s Meet the Press, December 23, 2018.

No Two Sides to This Story Allowed

“If it’s Tuesday, the constitutional crisis alarm bells are ringing, but is anybody listening?...Folks, if this was happening in another country, what would we say? If a country’s ruling party was being investigated for potential election corruption and responded by attacking that investigation, launched its own counter investigation into the Justice Department itself, called for the imprisonment of those in the minority party and pressured leaders in law enforcement to lock them up. If that were happening in any other country, we’d probably call it a constitutional crisis for said country. What do we call it here, other than Tuesday?”
— Todd on MSNBC’s MTP Daily, May 22, 2018.

Chuck Won’t “Be Silenced” By Trump

“One thing we’re not is the opposition. We’ve never tried to be part of the political debate, but people want to drag us into it. We shouldn’t take the bait. We’re simply a voice of truth. There’s no balance, there’s just fairness and truth. And a true voice and the truth is what we all need to be hearing right now. A voice that no matter how many disparaging tweets or calls of fake news, we can’t let it be silenced.”
— Todd at Radio Television Digital News Association dinner on March 8, 2018.