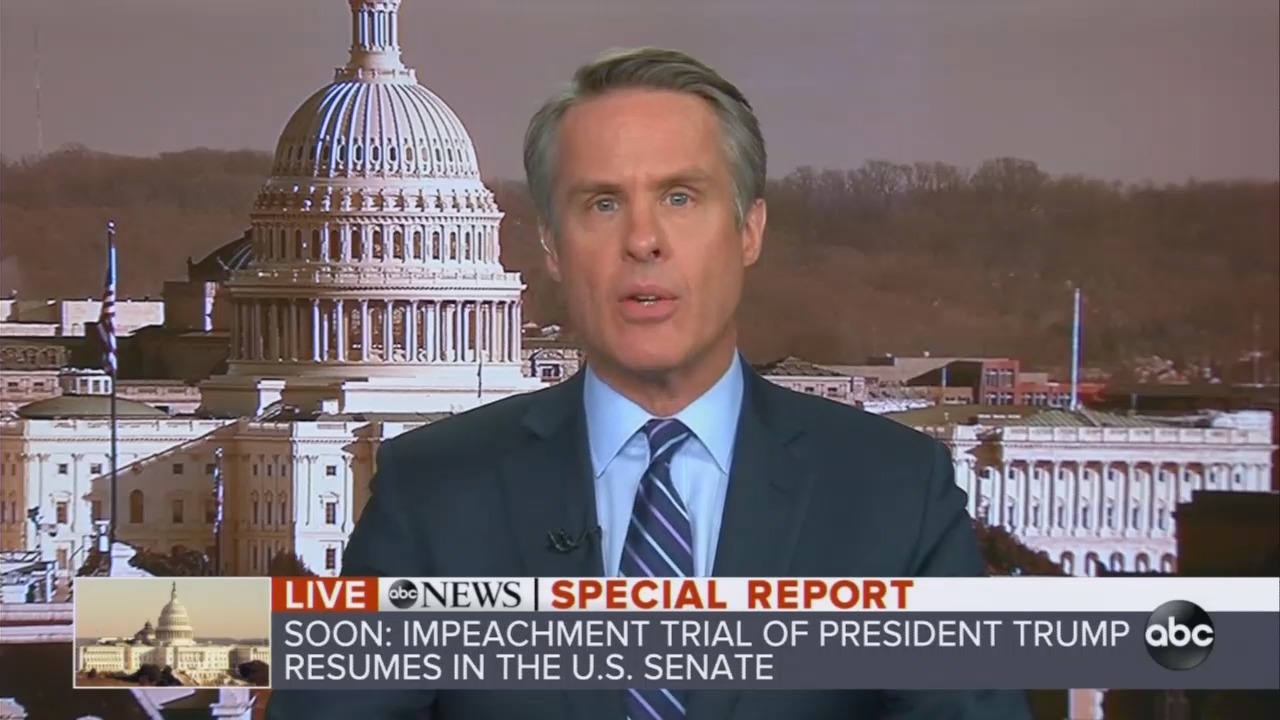 In the network and cable coverage of the Senate impeachment trial, the double-standard couldn’t be more stark. Liberal reporters and hosts have lionized lead Democratic House Manager Adam Schiff for his “dazzling” “impassioned” “brilliant” performance as he was compared to rock stars like Prince and Bruce Springsteen.

However, Donald Trump’s Republican defenders were slimed as “shameless,” lazy cowards who live in “terror” of the President.

Here are the most ridiculous examples of Schiff praise, contrasted with the liberal media’s most obnoxious attacks on Republican defenders, as seen in the coverage of the Senate impeachment trial:

“Adam Schiff addressing the Senate sitting as a court of impeachment with a proper legal argument. It was meticulous and well organized...At times, he tried to rise to a level of eloquence and to stir a sense of responsibility for the Senate....Even rising to the level of senatorial eloquence, if there is such a thing. In contrast to the rhetoric that we live with every day. The kind of brash and proudly profane Trumpian rhetoric where argument consists of gainsaying your opponent or calling them names...”
— Correspondent Terry Moran during ABC’s live coverage of Senate impeachment trial, January 22.

“A very, very powerful and forceful speech, two – almost two and a half hours by Adam Schiff, the lead House manager....If he [Donald Trump] was listening, he heard a very, very strong case from Adam Schiff why he, the President of the United States, should be convicted and removed from office.”
— Host Wolf Blitzer during CNN’s live coverage of Senate impeachment trial, January 22.

“It’s the House managers who have been telling a story, and they’ve done it very effectively. Adam Schiff, I think it’ll go down as one of the great performances even though he’s in a different chamber than he belongs to. He just shreds the other side every time he gets up.”
— Former Newsweek editor and MSNBC contributor Jonathan Alter on MSNBC’s live Senate trial impeachment coverage, January 22.

“Brilliant” Presentation Will "Ripple” Through Election and “Beyond”

“This is the most brilliant legal presentation I have heard. None comes close. The tone, the facts, the anticipated defenses. I am in awe.”
— January 22 tweet by Washington Post “conservative” columnist Jennifer Rubin.

“Congressman Adam Schiff steps back into the spotlight this afternoon, hours after delivering an impassioned and unforgettable speech Thursday night that will ripple through this presidential election year and beyond.”
— Host Nicolle Wallace during MSNBC’s live coverage of Senate impeachment trial, January 24.

“His [Adam Schiff] performances every single day, performances both from a substantive and a presentation level have been amazing. It’s like [Bruce] Springsteen or Billy Joel or Prince when he was alive, like you’re clapping and they come back out and then they do another song that’s even better. I suspect that tonight he’s going to do something that is absolutely outstanding and leave a lot of the Republicans coming out tomorrow saying, you know, I can’t follow with that.”
— MSNBC contributor Jason Johnson during MSNBC’s live coverage of Senate impeachment trial, January 24.

Republicans Too Terrified By Trump to Impeach

“When you watch somebody like Lindsey Graham and the clip that you showed before the break, what you’re seeing there is the face of terror....Every breath, every public word Lindsey Graham says is based on his terror of what Donald Trump can do to him if he doesn’t worship Donald Trump publicly....This is a poison element on the Republican side that has been poisoned by Trump terror. The thing that guides every public moment of their lives.”
— MSNBC host Lawrence O’Donnell on MSNBC’s The Beat with Ari Melber, January 22.

Throw These Fidget-Spinning Republicans Into Jail!

CNN politics reporter Jeremy Herb: “Yesterday, for instance Senator Richard Burr - senator from North Carolina. He decided to bring in fidget-spinners to help his colleagues pass the time....Tom Cotton got very excited. He had a purple-spinner.”...
Co-anchor John Berman: “Like 30 of them [Senate Republicans] would be in the slammer now if [Presiding Supreme Court Justice] John Roberts actually enforced the rules. Seriously! They’re talking in the chamber....They could be thrown behind bars.”
— CNN New Day, January 24.

How Can We Get These Sleepy, Lazy Republicans to Impeach Trump?

Co-host Gayle King: “You and your colleagues are laying out what some are calling a detailed, extraordinary, and some would say excruciating case to remove the president. Do you think you are you getting through to any Republicans who are listening?”...
Co-host Tony Dokoupil: “Congressman, when you make that case and you look out on the floor of Senators we’ve seen reports that some are doing crossword puzzles, some doze off. Do you feel you have their attention and they are receptive to the evidence you’re bringing forth?”
— Questions to Democratic Impeachment manager Hakeem Jeffries on CBS This Morning, January 23.

Anchor George Stephanopoulos: “I have to say it was breathtaking, maybe even a little surreal to see Ken Starr take on the age of impeachment comparing impeachment to war, calling it Hell, when he was the chief instigator of President Clinton’s impeachment.”
Correspondent Terry Moran: “It sure was, George. I thought the most impressive aspect of Ken Starr’s presentation there was the fact that he could keep a straight face through it because he was the leader and instigator of the Clinton impeachment....I’m not sure that it would appeal to anyone on the Democratic side, but maybe he was there to remind Republicans of how much they hated Bill Clinton.”
— ABC News live coverage of Senate impeachment trial, January 27.

“I thought you were being very deferential or diplomatic on the Ken Starr thing. I’ll say it less diplomatically, this is akin to a bank robber complaining that banks were too easy to rob....It is astonishing that Ken Starr is lamenting that’s become too easy to use impeachment, when, by any measure, the Clinton impeachment is something that a lot of people have debated, left and right, about did it sort of define impeachment downward?”
— NBC’s Meet the Press moderator Chuck Todd to NBC News legal analyst Berit Berger on NBC News’ live coverage of the Senate impeachment trial, January 27.

Trump Must Be Guilty, Look At All the “White People” On His Defense Team

“White House and white people. I mean, you know, this is a lesson in the diversity of the two parties. I mean, you look at the House managers, it was almost evenly divided between men and women. It was – you had two African Americans, you had a Hispanic, I mean, you know, it was all white men today. There are two – two white women on – on allegedly on the team, we’ll see if they’re allowed to argue, but I mean, I think, you know, in a visual medium when you have one side that has a very diverse team and the other side that’s all white men, that says something in and of itself.”
— CNN chief legal analyst Jeffrey Toobin on CNN’s live coverage of Senate impeachment trial, January 25.

“Midnight Mitch” Is Being Unfair to Democrats

CNN chief legal analyst Jeffrey Toobin: “Mitch McConnell is trying to make the trial a farce, I mean, trying to make it a joke.”...
CNN chief political analyst Gloria Borger: “I want to agree with Jeffrey on this. I think this is a perversion of the process that was used with Bill Clinton, plain and simple. It’s condensed to the point where it’s laughable. It’s a joke.”...
CNN contributor Carl Bernstein: “This is the most important moment for the Republican Party since the censure of Joe McCarthy and the impeachment and resignation of Richard Nixon in which Republicans became great heroes and patriots. Now we’re looking at ‘Midnight Mitch’ and the so-called world’s greatest deliberative body really embracing a coverup that is there for all to see.”
— CNN’s AC360, January 20.

Why Is It So “Hard” for Republicans to “Speak Up” Against Trump?

“You have said recently, ‘Fellow Republicans, there’s still time to save your souls. You’ve also said politics can make us silent....when we should speak. Silence can equal complicity.’ Do you think, Senator, that you should have spoken up more? Do you regret you didn’t speak up more? And why is it so difficult for Republicans to speak up against this President when they don’t believe what he’s doing. Tell us why that’s so hard?”
— Co-host Gayle King’s question to former Republican Senator Jeff Flake on CBS This Morning, January 20.

If You Defend Trump Now, Your Family Name Shall Be Shamed Forever

Host Bill Maher: “This is the moment in America that Rome faced with Julius Caesar when the republic became a dictatorship. I know they are going to acquit him but the fact that we had this trial and there was no witnesses and we don't care about laws anymore or rules or what matters, when it goes from nation of laws republic to Senate that just goes along and might is right, that is that moment I know that sounds overly dramatic.”
Former MSNBC host and current Showtime’s The Circus co-host Alex Wagner: “It’s not. It’s heartbreaking. It's a farce that there are Republican senators in the audience with fidget spinners, but when you think about the gravity of the moment, this is a test of liberal democracy....Has one party become so corrupted by power that they’re shredding the basic principles of what the country stands for?”
— HBO’s Real Time with Bill Maher, January 24.