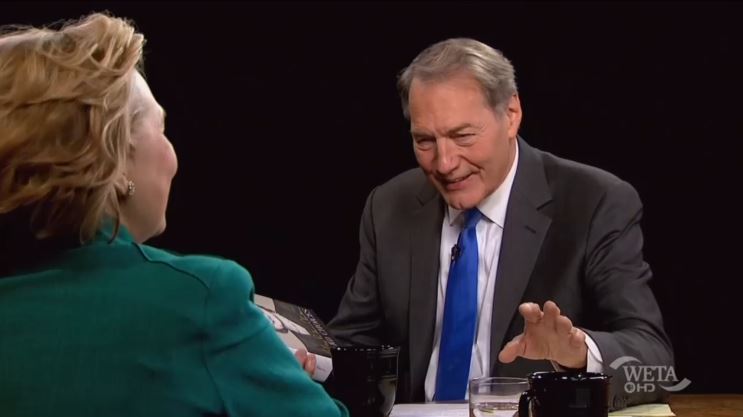 As the decade comes to a close, NewsBusters is recounting the most obnoxious liberal bias of the last 10 years. The decade began with liberal journalists and celebrities praising Barack Obama as a savior and the “Second Coming,” while depicting his political foes like the Tea Party as “racist” “terrorists” who wanted “a lot of people to die.”

As the decade came to a close the lefty media hailed Hillary Clinton as “the smartest woman in the room” but compared Donald Trump and his conservative supporters to Nazis.

In today’s installment, we have the most outrageous examples of journalists fawning over liberal or left-wing icons not named Obama (That’s an entire article in itself).

In upcoming days, we’ll be showcasing the most horrendous anti-conservative quotes of the decade, the most hateful attacks against Donald Trump, the over-the-top adulation of Barack Obama, the most ridiculous celebrity freak-outs and some of the silliest analysis of the last 10 years.

“Maya Angelou, the late Maya Angelou, wrote a poem about her during the 2008 presidential campaign. It contains these lines: ‘There is a world of difference between being a woman and a being an old female. If you’re born a girl, grow up, and live long enough, you can become an old female. But to become a woman is a serious matter. A woman takes responsibility for the time she takes up and the space she occupies. Hillary Clinton is a woman.’ Some say she may be the first woman in the White House. I am pleased to have Hillary Clinton back at this table. Welcome.”
— Host Charlie Rose setting up an interview with Hillary Clinton on his PBS program, July 17, 2014.

“Navigating through a buttoned-down sea of Brooks Brothers and Talbots as she made her way to the podium, Hillary was surrounded by applause, and by groupielike bureaucrats waving camera-phones. It was a historic moment, at least in the world of State…If her debut was a rock concert, Hillary was Bono – a bona fide international celebrity, with credibility as a
crusader for the disadvantaged. In that regard, she was one of a kind.”
— From the February 2014 book HRC co-written by Bloomberg News reporter Jonathan Allen and The Hill’s Amie Parnes.

Correspondent Joy Reid: “If you look at Hillary Clinton’s qualifications, I mean, my God, you know, since the Founding Fathers, has anyone tried run for president with more on their resume?”
Host Andrea Mitchell: “John Quincy Adams, maybe.”
Reid: “Maybe John Quincy Adams. True, true, true. Jefferson, Adams, I mean you have to go back literally to the 18th century to find somebody with a more packed resume than Hillary Clinton.”
— Exchange on MSNBC’s Place for Politics, April 8, 2016.

“Madame Secretary, last night when you took stage in Sacramento, there was a woman standing next to me who was absolutely sobbing. And she said, you know, ‘It’s time. It’s past time.’ And you see the women – you see people here and people just come up to you and they get tears in their eyes. Do you feel – do you feel the weight of what this means for people?”
— NPR’s Tamara Keith to Clinton at a June 6, 2016 press availability shown live on CNN Newsroom.

“We went into the GMA vault and found your first appearance here on Good Morning America in 1988....You were speaking out about your lawyer and talking about equality and such....For as long as we can remember, seeing you in the spotlight, and you have been fighting for others.”
— Co-host Robin Roberts to Clinton at a town hall event on ABC’s Good Morning America, April 21, 2016.

“I would be ‘dead rich,’ to adapt an infamous Clinton phrase, if I could bill for all the hours I’ve spent covering just about every ‘scandal’ that has enveloped the Clintons. As an editor I’ve launched investigations into her business dealings, her fundraising, her foundation and her marriage. As a reporter my stories stretch back to Whitewater. I’m not a favorite in Hillaryland. That makes what I want to say next surprising. Hillary Clinton is fundamentally honest and trustworthy.”
— Former New York Times Executive Editor Jill Abramson in March 28, 2016 Guardian column: “This may shock you: Hillary Clinton is fundamentally honest.”

“She’s [Hillary Clinton] one of the smartest people, she will always be the smartest woman in the room, I think.”
— The Hill reporter Amie Parnes on PBS’s Charlie Rose, May 3, 2017.

Boosting Bill: He Should Be President of the World

“People see you putting on this event, they heard you at the convention make a barn-storming speech, an incredible speech....I was there. You electrified the place. And they all say, ‘Why do we have this goddamned 22nd Amendment? Why couldn’t Bill Clinton just run again and be President for the next 30 years?’...We’re trying to change the rules in Britain, actually, because if you can’t be President again here, we’d quite like you to be Prime Minister in our country. Are you available if it comes to it, if I get this through?”
— CNN’s Piers Morgan to Bill Clinton, September 25, 2012 Piers Morgan Tonight.

“Bill Clinton has taken the prestige of his time in office, his relationships with other heads of state and forged something never known before, a global force for good. He’s fighting AIDS in Africa, the devastation of floods and earthquakes, and nearly every other challenge facing mankind on the face of the globe....We’ve never had a world leader like this before! Bill Clinton: President of the World.”
— Chris Matthews on the February 9, 2011 Hardball, touting his MSNBC documentary on Clinton.

“You could just see the charisma that he has on stage, that whatever you get a camera on this guy, he has this charisma, that was that moment where he felt he had some kind of destiny. He has that gleam in his eye. Somebody, Evan Smith at The Texas Tribune said, ‘Seeing him, it’s like a Jesus Christ Superstar seeing this guy in front of people.’”
— Vanity Fair writer Joe Hagan on MSNBC’s Morning Joe, March 14, 2019.

“Like Lincoln, O’Rourke is charismatic, tall, lanky, filled with energy, an accomplished public speaker and a natural campaigner. Like Lincoln, O’Rourke is a can-do underdog with an ability to command an audience and energize an army of followers. And finally—just like Lincoln—O’Rourke would begin his quest for the presidency (he says he’s not a candidate, but who believes that), following a Senate campaign that he actually lost.”
— Writer Mark Perry in the December 1, 2018 Politico article “Beto Has a Path to the Presidency: Lincoln’s.”

“Conservative” “Patriarchy” Is “Terrified” By AOC

Former Huffington Post reporter Laura Bassett: “She’s [Democratic Rep. Alexandria Ocasio-Cortez] got a target on her back because she ticks every box that makes conservative men uncomfortable: she’s a woman, she’s Latina, she’s young, she’s working class, she’s a millennial, she’s a democratic socialist. Everything that makes people uncomfortable....She’s sort of the ideal anti-Trump and she is threatening white conservative men’s power and they’re terrified of her.”
Host Brian Stelter: “And thus she’s a feature on Fox. That’s what you’re saying?”
Bassett: “Absolutely. They’re trying to take her down. They’re using all the tricks in the patriarchy.”
— CNN’s Reliable Sources, January 27, 2019.

“Even Castro’s critics praised his advances in health care and in education....Fidel Castro was considered, even to this day, the George Washington of his country among those who remain in Cuba.”
— Correspondent Jim Avila during ABC News coverage of the former communist dictator’s death early in the morning of November 26, 2016.