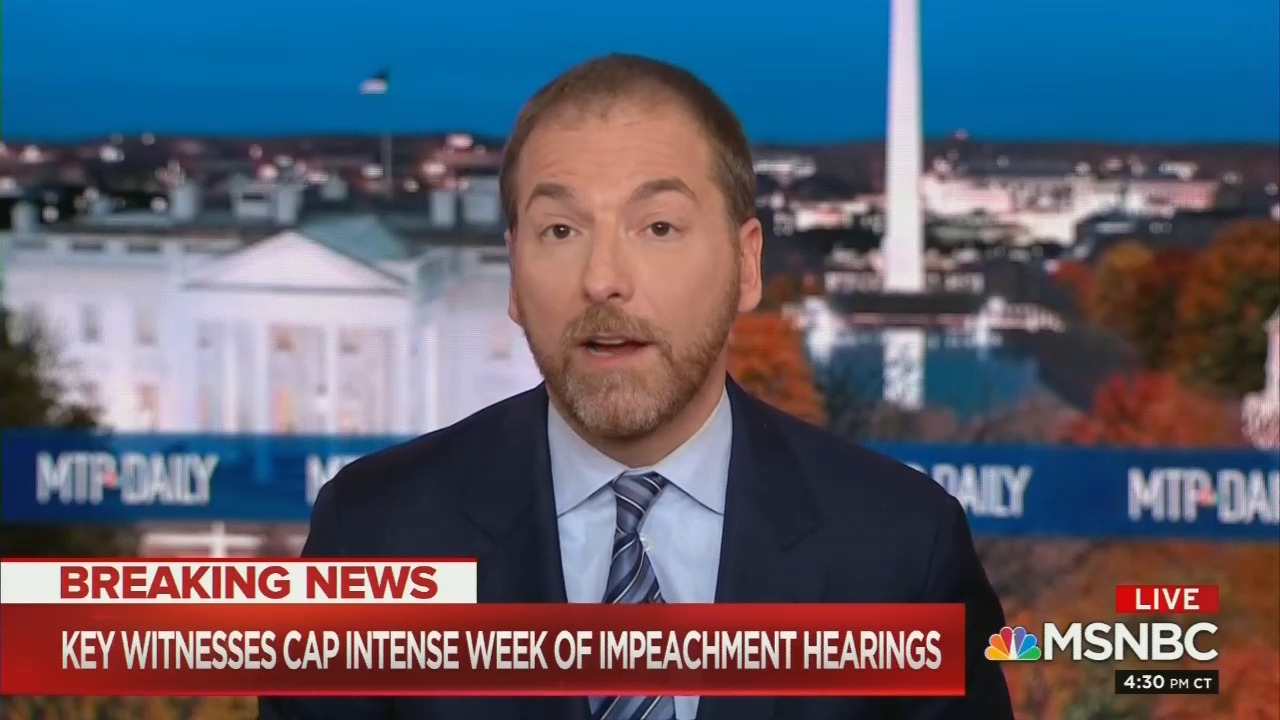 Exasperation is in the air.

Liberal journalists are convinced the only way to save the Republic is to impeach Donald Trump and yet increasingly hosts, reporters and pundits are clearly worried they and the Democrats might have missed their shot.

NBC’s Meet the Press host Chuck Todd compared the President to O.J. Simpson when he worried Trump would evade justice: “I’m having a quick flashback to the O.J. trial.” Todd feared Trump was “going to get acquitted” even though “everybody knew” he was “guilty.” His MSNBC colleague Donny Deutsch yelled at his fellow Democrats for being too weak: “We can’t bring a knife” to a fight with Republicans who have “machine guns.”

CNN host Brian Stelter fretted to fellow CNNer Jake Tapper are we going to “regret not doing even more to speak out about this lying and deceit?” Stelter was so confounded that any Republican could support Trump, he actually asked on a cult expert: “You say the President is using mind control, but how is that provable?”

Lefty celebrities are exasperated as well. Robert De Niro called Trump a “fake president” and Robert Redford charged it was time for “dictator” Trump’s “monarchy in disguise” to be ousted.

The following are just a few of the worst outbursts from liberal journalists and celebrities over the past month:

Worried That “Guilty” Trump Going To Get Off Like OJ

“I’m having a quick flashback to the O.J. trial, frankly, where the facts were damning, but it didn’t matter. And yet, he was innocent, but everybody knew he was guilty. Are we about to head into a situation like that where he’s going to get acquitted and yet everybody knew he’s guilty?”
— Host Chuck Todd on MTP Daily, November 21.

“Facts and the laws are not going to protect us right now. And the point being for the Democrats, we need to twist and meld and work. We are fighting against an enemy, the Republicans, with machine guns and we can’t bring a knife to it. And I’m not saying do anything dishonest. But we have to find a way to take what is happening there [impeachment hearings] and make it so compelling to the voter because otherwise we’re going to get four more years of Donald Trump. And we can’t survive four more years.”
— Former MSNBC host Donny Deutsch on MSNBC’s Deadline: White House, December 3.

Host Brian Stelter: “You have been around a little longer than me. You covered Watergate. You covered the Clinton impeachment. On the eve of another impeachment inquiry – hearings this week, do you fear for the country?”...
Former PBS host Bill Moyers: “Yes, for the first time because...a society, a democracy can die of too many lies. And we’re getting close to that terminal moment unless we reverse the obsession with lies that are being fed around the country.”
— CNN’s Reliable Sources, November 10.

How Can Anybody Support Trump? We’ll Ask a Cult Expert

“The word ‘cult’ has been popping up more and more. Think back to two weeks ago on this program, Anthony Scaramucci talked about his claim that Trump supporters are in a cult. Just last week, Dan Rather said he thinks for Trump seems increasingly cultish. And this weekend in The Washington Post, Trump critic and Republican strategist John Weaver said, the GOP is ‘not a party anymore in the traditional sense; It’s a cult.’ But none of them are mental health experts. Steven Hassan is. He’s out with a brand-new book called The Cult of Trump. He has firsthand experience escaping the Unification Church back in the ’70s....You say the President is using mind control, but how is that provable?”
— Host Brian Stelter on CNN’s Reliable Sources, November 24.

End Is Near for Trump “Cult”

Host Brian Stelter: “Dan you tweeted something that might be related to this. You said the other day, ‘I have covered many cults. Some end with a bang, others with a whimper, but they invariably end. The question is how much damage they leave in their wake.’ Is Mitch McConnell part of the Trump cult?”
Former CBS Evening News anchor Dan Rather: “Yes. I think the short answer is yes. And I’m not the only one making this observation that increasingly President Trump’s support seems cultish. It’s all about him it’s not about the policy, it’s not about the standards of politics....These cults generally don’t end well. People will say it’s too much to say it’s a cult. But I don’t think so.”
— CNN’s Reliable Sources, November 17.

“We watched a moral crisis unfold in front of us this morning, in which we discovered that one of our great political parties has given itself over to a cult of personality and a cult of personality that surrounded around only his interests, around Donald Trump’s personal interests, and that the entire of the Republican Party [sic] is willing to subsume itself to that is shocking. It’s sad.”
— MSNBC host Joy Reid during MSNBC’s post-debate analysis, November 21 at 12:39 am Eastern.

“We thought Emperor Nero was wrong to fiddle as Rome burned – this guy [Donald Trump] is worse. He uses the reality of climate change to posture himself as the little guy taking on the experts, the sophisticates, the foreigners. Donald Trump gets votes by consciously lying about the scourge facing the only planet we have. He’s telling us that none of it is true, none of what we see is true, none of what our eyes and minds and instincts are telling us. He’s using idiot nationalism to take us down – not just we Americans, but the world with us.”
— Host Chris Matthews on MSNBC’s Hardball, November 26.

“Now we face this wildly unconventional president who is actively and overtly putting all the norms, that so many of us were accustomed to, on trial. And so, we have these forces in American life that are perennial: xenophobia, extremism, racism, nativism, isolationism. They ebb and they flow in American life, they always have. And right now they’re flowing. The task of the country is to get them to ebb.”
— Former Newsweek editor Jon Meacham on CBS’s Face the Nation, December 1. 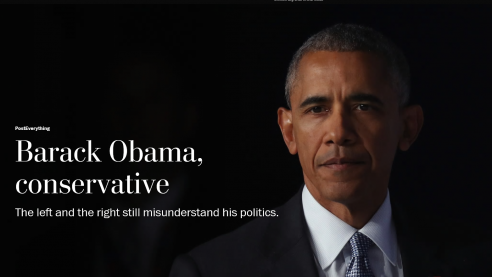 “The former president [Barack Obama] was skeptical of sweeping change, bullish on markets, sanguine about the use of military force, high on individual responsibility and faithful to a set of old-school personal values....To the dismay of many on the left, and to the continuing disbelief of many on the right, Obama never dramatically departed from the approach of presidents who came before him. There’s a simple reason: Barack Obama is a conservative.”
— Washington Post Outlook Assistant Editor David Swerdlick in November 24 article.

Our Liberal Bias Is “Reality-Based”

“We can’t just sort of say, you know, take it down the middle and sort of say ‘here’s what the people on the right are saying. Here’s what the people on the left are saying.’ I mean, that does amount to a false equivalency, because, unfortunately, you know, what’s being viewed as left-wing media is actually what I like to call the reality-based press.”
— Washington Post media columnist Margaret Sullivan on CNN’s Reliable Sources, November 24.

“Do you think journalists are going to look back years from now and regret not doing even more to speak out about this lying and deceit?”
— Host Brian Stelter to CNN’s The Lead host Jake Tapper on CNN’s Reliable Sources, November 24.

Arbiter of Truth Dan Rather Has Spoken

“I’m reminded of Lincoln’s words: ‘You can fool some of the people some of the time, but you can’t fool all the people all of the time,’ which what President Trump has been attempting to do.”
— Disgraced former CBS Evening News anchor Dan Rather on CNN’s Reliable Sources, November 17.

Screw “Uniting” the Country! “Trump Is Dangerous” for Minorities!

“Particularly for voters of color, there is no conversation of interest to talk about uniting, to be blunt, with the party that has given up not just its moral standing, but its soul....to the person who is President of the United States right now. The danger of Donald Trump is much more extent to my community. It’s much more extent to both my immigrant relatives, to African-Americans, to Latinos, it’s not about whether or not we can regain our public standing on the world stage and be seen as America, as America was, to people who look like me, it’s about imminent danger. Donald Trump is dangerous to our families, he’s dangerous to our lives.”
— MSNBC host Joy Reid during MSNBC’s post-debate analysis, November 21 at 12:39 am Eastern.

Why Aren’t You More of a Lefty?

“It seems like you are saying that the democracy we are currently living in doesn’t work, it is broken, which calls for foundational change. But you are not a foundational change candidate. Why are you not a candidate calling for Medicare for All like some of the other candidates?...Why can Canada have it, why can the U.K. have it, why can’t we have it?’
— Host Katy Tur to Democratic presidential candidate Colorado Senator Michael Bennett on MSNBC Live, November 8.

“Why is it that support for impeachment is going down for Americans, and Trump’s approval ratings – I can’t even say it, it makes me nauseous –  are going up? What is that they like about him? Is it the fact there are still 4,000 kids still at the border in custody or that he trashes veterans or that he makes deals with Russians, that he handed them the Middle East over to Russia?...They have brainwashed Americans into thinking he didn’t commit a crime!”
— Co-host Joy Behar on ABC’s The View, November 22.

“He’s a fake president....He calls everything fake because he knows he’s fake, so he’s projecting....I like [Mike] Bloomberg. He’s an adult. He’s a grown-up....To me, Bloomberg might be the one. I love Buttigieg....But we need to get past this horrible situation.”
— Actor Robert De Niro on CBS’s The Late Show with Stephen Colbert, November 25.

Time to Vote Out  Trump’s “Monarchy in Disguise”

“We’re up against a crisis I never thought I’d see in my lifetime: a dictator-like attack by President Donald Trump on everything this country stands for. Our shared tolerance and respect for the truth, our sacred rule of law, our essential freedom of the press and our precious freedoms of speech – all have been threatened by a single man. It’s time for Trump to go....This monarchy in disguise has been so exhausting and chaotic...There are only 11 months left before the presidential election; 11 months before we get our one real chance to right this ship and change the course of disaster that lies before us.”
— Actor Robert Redford in November 26 opinion piece for NBCNews.com.

Capitalism Is “Killing Us,” Screams The Highly-Paid Actor

“It’s time for an economic revolution. Capitalism today is failing us, killing us, and robbing from our children’s future.”
— December 1 tweet by actor Mark Ruffalo.