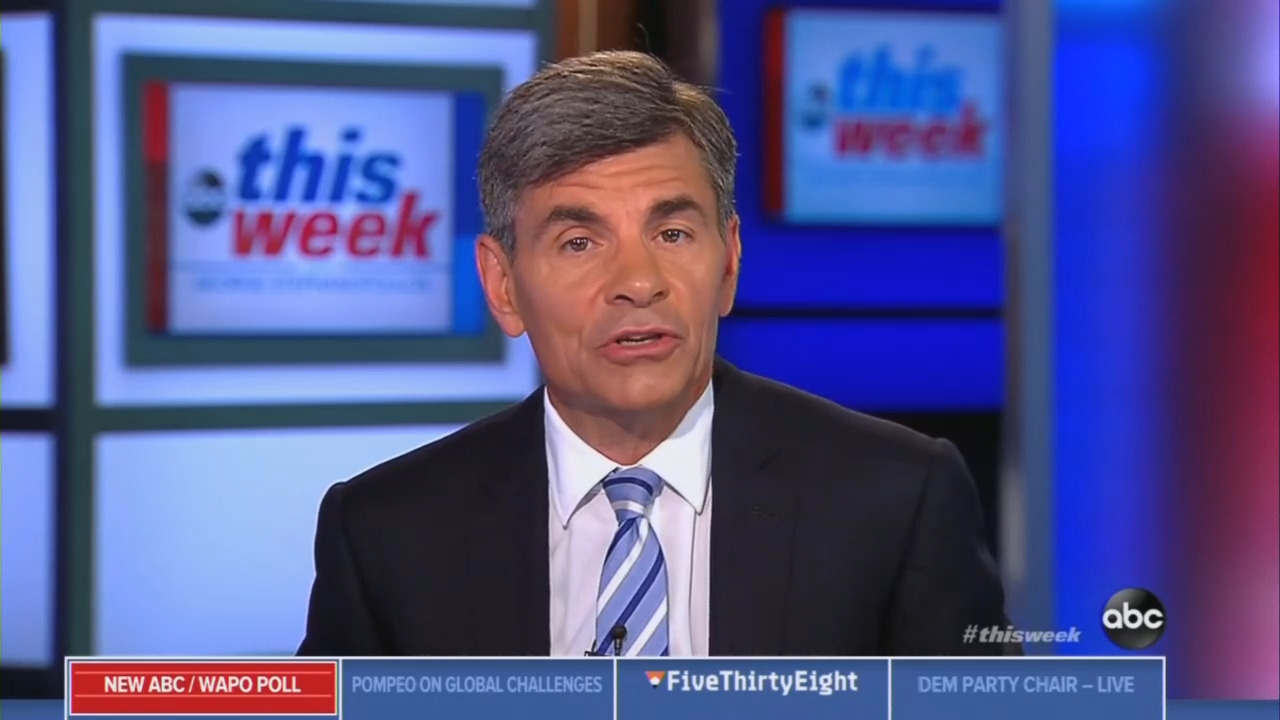 The moderators for ABC’s Thursday night Democratic debate include a former Bill Clinton campaign staffer and an anchor who was actually kicked out of a Donald Trump campaign event. So it’s safe to say ABC’s Democratic debate hosts won’t be asking any tough questions of the candidates – at least none from the right.

Before George Stephanopoulos became an anchor at ABC News, he spun the news as Bill Clinton’s 1992 campaign advisor and then White House Communications Director. The Clinton Foundation donor has continued spinning for Democrats from his perch as Good Morning America co-host and moderator of ABC’s This Week. On the October 28, 2018 This Week, for example, Stephanopoulos linked a rise in anti-Semitism on the “unapologetically incendiary President [Trump] untrammeled by traditional norms of civility.”

During a 2015 Trump campaign event, Univision anchor Jorge Ramos was so rude he was removed from the press conference. After Trump won on election night 2016, Ramos vowed to “Resist and report and not be neutral.”

In January, ABC World News Tonight anchor David Muir hailed Nancy Pelosi’s return to House Speakership as a “new dawn.” His colleague, ABC News correspondent Linsey Davis is not known for her tough questions to Democrats either. She recently asked failed Georgia Democratic gubernatorial candidate Stacey Abrams “Do you believe that elections are essentially rigged?” and lobbed this softball “Would you say that President Trump is a white supremacist or a racist?”

The following are just a few examples of Thursday night’s debate moderators’ history of liberalism, as culled from the MRC’s archives:

Change the Rhetoric, Unless It’s Anti-Trump

“Across social media hate speech and anti-Semitism are rampant and on the rise. All against the backdrop of the ugliest political climate in modern times. At the center, an unapologetically incendiary President untrammeled by traditional norms of civility.”
— Host George Stephanopoulos on ABC’s This Week, October 28, 2018.

“When you hear him put out that tweet, ‘stable genius,’ it’s kind of like Richard Nixon, ‘I’m not a crook.’”
— Moderator George Stephanopoulos on ABC’s This Week, January 7, 2018.

“Americans of high school age are 82 times more likely to die of gun homicide than their peers in the rest of the developed world. That has to be connected to the availability of guns, doesn’t it?”
— Moderator George Stephanopoulos questions to Texas Lt. Governor Dan Patrick on ABC’s This Week, May 20, 2018.

As If the Media Never Called Trump a Liar?

“Is the Hillary Clinton team right when they complain about this double standard, they say ‘well voters think she’s dishonest in part because the media hasn’t done its job calling out the dishonesty of Donald Trump’?”
— Anchor George Stephanopoulos to New York Times reporter Maggie Haberman on ABC’s This Week, September 25, 2016.

“Making sure we are always accurate, especially with these attacks coming in on the press, we have to make sure to go above and beyond to ensure that everything we do is accurate and fair.”
— Former Clinton campaign operative George Stephanopoulos and ABC Good Morning America co-host being interviewed on ABC’s Washington D.C. affiliate WJLA’s Good Morning Washington, February 27, 2019.

“The fact is that Republicans with this negotiation, they want to change the essence, I think, of the United States. I mean, do they really want to make America white again?...Is that the deal?”
— Univision anchor Jorge Ramos, discussing immigration legislation, on CNN’s AC360, February 12, 2018.

Wall = “Symbol of Hate and Racism”

“Mr. Trump is not the first president to ask for money for a wall. George H.W. Bush, Bill Clinton and George W. Bush built fences and walls along the southern border. Barack Obama maintained the resulting system of roughly 700 miles of physical barriers. So why don’t we want Mr. Trump to build his wall? What is different? The difference is that Mr. Trump’s wall is a symbol of hate and racism.”
— Univision anchor Jorge Ramos in a January 9, 2019 New York Times op-ed.

“There’s an entire current within the United States that has emerged in opposition to Donald Trump but that are doing wonderful things. You have the Dreamers, these kids that arrived here undocumented, that have organized wonderfully, that go into senators’ and congressmens’ offices. They don’t allow them to eat in restaurants and harass them wherever they go.”
— Univision senior news anchor Jorge Ramos on Spain’s El Intermedio, November 13, 2018. (As translated from original Spanish broadcast.)

Ramos Election Night Plan: “Resist and Report and Not Be Neutral”

“When he won, I said it as if I was reporting a football score or a soccer match. ‘Donald Trump is going to be the next president of the United States.’ No emotion. Just the facts....I’ve been to wars, I’ve covered the most difficult situations in Latin America. But I needed to digest and to understand what had happened. I came home very late. I turned on the news. I had comfort food — cookies and chocolate milk — the same thing I used to have as a kid in Mexico City....Once I digested what had happened with Trump and had a plan, which was to resist and report and not be neutral, then I was able to go to bed.
— Univision anchor Jorge Ramos discussing his reaction to Trump’s 2016 Election Night win, as reported in November 6, 2017 Esquire article “The Untold Stories of Election Day 2016 What really happened?”

Trump is So Bad, “Neutrality Is Not An Option”

“It doesn’t matter who you are – a journalist, a politician or a voter – we’ll all be judged by how we responded to Donald Trump. Like it or not, this election is a plebiscite on the most divisive, polarizing and disrupting figure in American politics in decades. And neutrality is not an option. The day after the election will be too late....If a candidate is making racist and sexist remarks, we cannot hide in the principle of neutrality. That’s a false equivalence....Judgment day is coming. Will you have peace of mind come November 9th?”
— Univision anchor Jorge Ramos in August 23, 2016 piece for Time magazine. 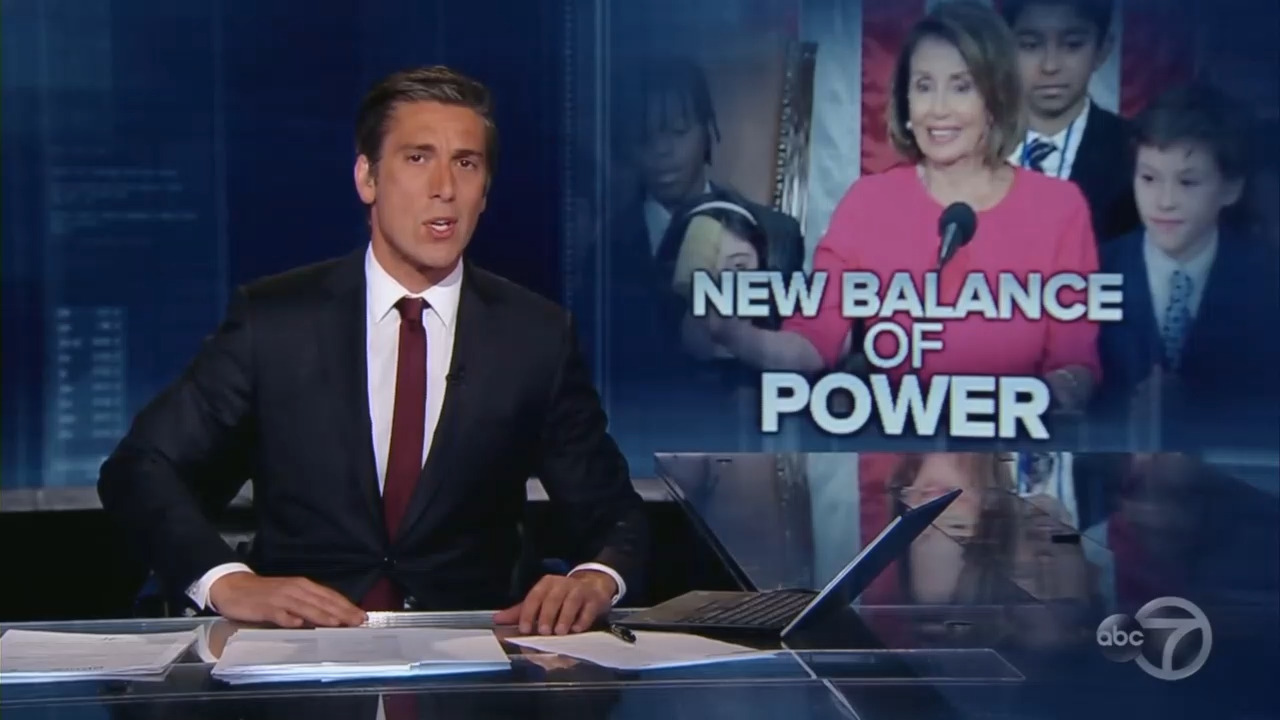 “We’re going to begin with that historic power shift in Washington. Democrats taking over the House and making history, with the new makeup of Congress. Nancy Pelosi, the first woman to ever be speaker of the House, now returning for her second run in the role. Calling the session to order with her grandchildren, inviting all of the children and grandchildren in the chamber right up to the podium. Calling it a ‘new dawn,’ Pelosi welcomed the most diverse group of representatives the Congress has ever seen.”
— Anchor David Muir on ABC’s World News Tonight, January 3, 2019.

“Do you believe that elections are essentially rigged?”...
“You’ve suggested voter suppression is more insidious now, in 2019, than it was even in the ’60s. How so?” ...
“Would you say that President Trump is a white supremacist or a racist?”
— Questions to former Democratic Georgia gubernatorial candidate Stacey Abrams on ABC’s This Week, August 18, 2019.