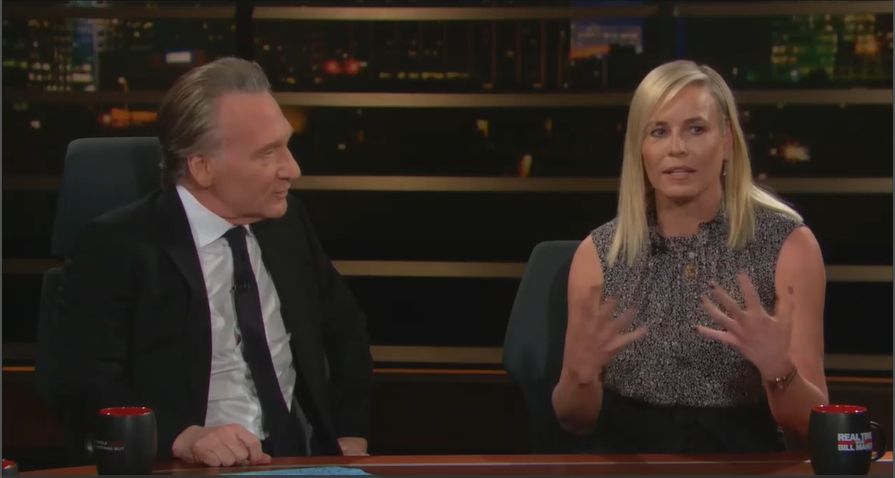 Therapists in Hollywood must be raking it in this month, as celebrities from Chelsea Handler to Amy Poehler confessed to having emotional breakdowns and “panic attacks” over Donald Trump. Some of them were just sad as they cried over no collusion in the Russia case. Singer Bette Midler claimed Trump had “caused depression, despair, confusion and death.”

Others expressed anger. Actor Robert De Niro raged against the “wannabee gangster in the White House.” Comedian D.L. Hughley demanded action as he insisted if Democrats didn’t impeach Trump then the word “justice” has no meaning. And others, like Empire actress Taraji P. Henson prayed – to Joe Biden – to “save” them.

The following is a just a sample of celebrities losing their mind over Donald Trump in the last month:

“I’m happy to stand with Samantha Bee tonight to support the First Amendment, the right of the President to be a relentless and unrepentant lying scumbag, the right of his supporters to not give a shit and our right to do something about it...Impeachment or not, there will be an election. Unless Mitch McConnell can figure out a way to stop that vote, too.”
— Actor Robert De Niro at TBS’s Samantha Bee’s Not The White House Correspondents Dinner, April 27.

“Wannabe Gangster” in the White House

Actor Robert De Niro: “We have a wannabe gangster in the White House now.”
Host Stephen Colbert: “Yeah. He does – he acts – he tries to act like a tough guy. Tries to act like a made man.”
De Niro: “Like a made guy. You call it a certain say disappointed dunsky. And a dunsky is a way of calling a don, sort of a contracted way of don. A ‘D.D.’ you’d call him – a disappointed dunsky. That’s what he is. He’s a dumb bell, in other words.”
— CBS’s The Late Show with Stephen Colbert, April 19.

“Justice” Has No Meaning Unless Trump is Removed

“The bottom line is this. If he [Donald Trump] doesn’t deserve to be impeached then we should take the word out of the dictionary. We should also take out ‘Justice.’”
— Comedian D.L. Hughley on TV One’s The D.L. Hughley Show, April 24.

“I had a midlife identity crisis once Trump won the election because I had never had my world feel so – feel so unhinged I think. And I had to pay a psychiatrist to listen to me bitch about Donald Trump for about the first three weeks....It was a huge emotional trigger of everything being destabilized and I realized just how spoiled and privileged I had been all my life to realize, to be this upset and this on a 10 every day and the outrage and the anger. I just wanted to fucking fight people, you know? And I was like, I got to go see a psychiatrist.”
— Comedian and former Netflix host Chelsea Handler on HBO’s Real Time, April 5.

“I had an awakening after the election in 2016 because I just couldn’t believe that something that terrible could happen in my perfect universe. It made me really dive into myself. To understand why I was so – felt such outrage, why I felt so unhinged.”
— Comedian and former Netflix host Chelsea Handler on NBC’s Today, April 9.

“Women have been rightly and righteously furious about this administration and have been working together and bonding together just in an attempt to make sense of all of it. Every woman I know has a text chain, every morning we just say, ‘Can you believe this? Can we break this down together so I don’t lose my mind? Anybody out there?’ Because it’s really crazy-making. I can’t watch him speak. It’s so upsetting....It’s really hard to not have a full-on panic attack every day. It’s why people are self-medicating.”
— Comedian/actress Amy Poehler in April 24 interview with The Hollywood Reporter.

Crying Over No Proof of Collusion

“#DonaldTrump has forced us to live through war as a nation for the last two years; he has caused depression, despair, confusion and death.  We’re not just sick at heart, but literally sick from him; from uncontrollable rage at the thought that he will get away with his crimes.”
— March 24 tweet by actress/singer Bette Midler.

“I Have Not, Nor Will I Change My Opinion Of trump, His Evil, Or His Ties To Russia. He Is up to his Neck in Crime & Corruption. THERE ARE TWO THINGS THAT CANNOT BE HIDDEN FOREVER…THE SUN  AND…THE TRUTH.”
— March 25 tweet by actress/singer Cher.

“U have to be the world’s most self-serving useful idiot not to read btw the lines of Barr’s letter so as to celebrate ur pre-determined conclusions, drawn in defense of a US turn toward authoritarianism, which, as described in the letter, u helped facilitate. Harshness intended.”
— March 25 tweet by HBO’s Westworld actor Jeffrey Wright.

“Tomorrow Donald Trump, with the aid of the Attorney General of the United States, will try to drive a stake through the heart of Democracy.”
— April 17 tweet by actor/director Rob Reiner.

“I’m waiting to hear what Joe Biden is going to do. [She claps her hands in prayer and whispers.] Save us, save us, save us! [Laughs.] Save us! Save us, Joe!...Joe, I love you, save us!”
— Excerpt from March 25 Washington Post interview with actress Taraji P. Henson.

“What good is leaving a roadmap for impeachment if you know a tribal, party-before-country Republican Senate will never remove the President? Bob, your trail of breadcrumbs isn’t good enough. We’re not that smart anymore. America is an aging shortstop; you have to hit it right at us....You, tough guy, couldn’t get the president’s taxes? You didn’t follow the money? You didn’t interview Trump, we’re told, because he couldn’t possibly testify under oath without perjuring himself. And that’s our problem? It’s one feckless punt after another.”
— Host Bill Maher on HBO’s Real Time, April 26.

“There was a guy who was trying to put these dots together for two years, Robert Mueller. Why did he punt on this? Why did he not answer the call of history when it was so plainly his job to do that?”
— Host Bill Maher on HBO’s Real Time, April 12.

“And it just looks to me, you know, ‘high tech lynching,’ remember that phrase? This is a high-tech coup. I know Barr is an esteemed person, William Barr, he’s a stooge. This is what Third World countries do. The dictator appoints somebody who exonerates him. That’s what happened here. I think Democrats put too much faith in Republicans, I really do.”
— Host Bill Maher on HBO’s Real Time, March 29.

“Today, because we have somebody in the White House who’s cocking up our country, the most interesting people are the ones who can make fun of him or mincemeat out of him: the Bill Mahers, Stephen Colberts, Rachel Maddows.....He’s [Trump] proud of the fact that he’s the worst human being that ever worked in the (Oval Office).”
— Actor and producer Carl Reiner in an interview in the May 2 USA Today.