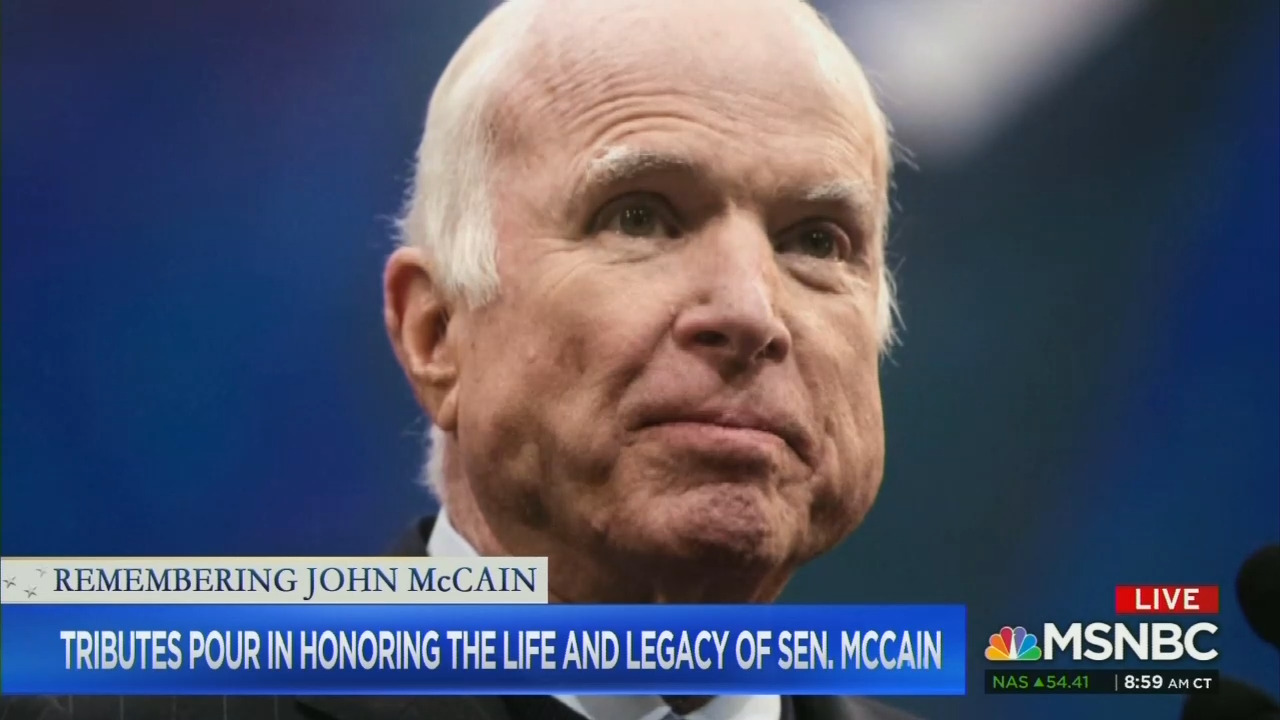 While there have been many respectful tributes to John McCain in the media in the past few days, there was a time when the liberal press weren’t always supportive of the war hero and independent-minded Senator from Arizona — particularly when he was getting in the way of their progressive agenda.

A look back at McCain’s relationship with the press, over the decades, shows it was complicated at best.

Yes, when he was playing the role of the “maverick,” bucking conservatives on issues like campaign finance, global warming or the closing down of Guantanamo, they brought him on their shows to embarrass or ostracize conservatives. He was the ultimate “even Republican,” as in “even Republicans” like John McCain think conservatives are being extreme on this or that issue.

McCain, for his part, cultivated the liberal press as they piled into his “Straight Talk Express” 2000 campaign bus. They preferred him as the more moderate choice to then-candidate George W. Bush. But when it was his turn at the top of the 2008 GOP ticket, when he became the obstacle to a liberal Barack Obama presidency, the media that once adulated him, turned on the Arizona senator.

Back then, former CBS News correspondent Bernie Goldberg, in a February 7, 2008 appearance on FNC’s The O’Reilly Factor called it right: “I do think he [John McCain] gets good treatment....The media like him because he’s the one who pokes his thumb in Republican and conservative eyes, mostly conservative eyes. But as soon as it’s McCain against Obama or Clinton, the media goes over to the other side.”

Bad Press: When McCain was in favor of the first Gulf War in 1991 he was actually compared to a Nazi. During a February 8, 1991, Time Washington bureau meeting, that was aired on C-SPAN, senior correspondent Hays Gorey spat: “McCain has got this ad hoc group of superpatriots that he’s organizing.” His colleague Jerome Cramer added: “They wear brown shirts and march around.” 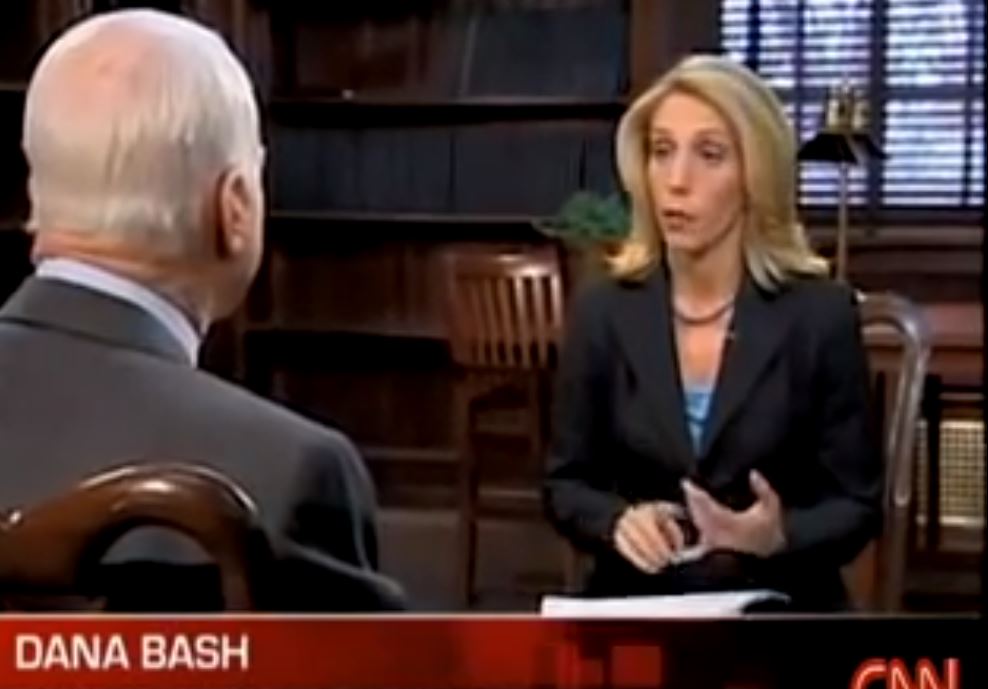 Of course, the vitriol for McCain was really unleashed once it became clear he was going to be the GOP’s 2008 presidential nominee. In an April 1, 2008 interview CNN’s Dana Bash pressed McCain on his “heartless” Republican fiscal policies: “You’ve been very clear that because of your principles and because of your Republican philosophy, that you think that the government really should be limited and really should stay out, for the most part, of bailing out both homeowners and what you call irresponsible lenders. But my question is, in this time of uncertainty, when there are so many people hurting, are you concerned that there are voters out there who hear that who say, ‘John McCain is heartless when it comes to this issue?’”

In 2008 a New York Times front-page story (with no evidence to back up the charge) suggested that the Arizona senator had an improper relationship with lobbyist Vicki Iseman. Iseman later sued to challenge the impression the newspaper was cooking: that aides were “concerned” she engaged in a “romantic” relationship with McCain for legislative favors. The Times settled out of court, claiming they never meant to imply...what they implied.

Back then, Today show anchor Matt Lauer badgered McCain’s lawyer about the rumor on the February 21, 2008 show: “He [John McCain] says there was no romantic relationship, that no favors were granted. You reiterate that. But even if this was just a close friendship, a typically close friendship, does a close friendship with a Washington lobbyist fly in the face of what John McCain has stood for over these past several years, the Straight Talk Express and an independence from special interest groups in Washington?”

In comparison to their hero Barack Obama, John McCain seemed less of a charming “straight-talker” and more like a “menacing” “troll.” Following the September 26, 2008 presidential debate MSNBC’s Hardball host Chris Matthews spewed: “Let’s start with John McCain. Do you think he was too troll-like tonight? You know, too much of a troll?...Do people really want to put up with four years of that? Of sitting there angrily, grumpily, like a codger? Like, I don’t want to push it too far, but didn’t he seem really contemptuous of his opponent?...Is every press conference going to be like that? A troll-like performance, angry at the world?”

Matthews continued the troll comparison, after the October 7, 2008 presidential debate, when he contrasted Obama and McCain’s styles: “Barack Obama is gifted in his birth by a wonderful smile. He has a wonderful way of disengaging or disarming attacks on him, even when they’re ferocious. John McCain, when he smiles, has a somewhat menacing quality.”

On August 22, 2008 then-CBS Early Show anchor Harry Smith slagged McCain in absentia when he tossed this softball at Obama: “Many of the attacks that have come from John McCain’s campaign have been, quite frankly, condescending. Are you surprised by that? Does it anger you?”

When McCain had serious questions about Obama administration officials, MSNBC.com Executive Editor Richard Wolffe played the race card, as seen as this exchange on the November 19, 2012 edition of Hardball:

MSNBC.com Executive Editor Richard Wolffe: “It’s outrageous that there is this witch hunt going on on the right about these people of color, let’s face it, around this President: Eric Holder, Valerie Jarrett, now Susan Rice; before it was Van Jones. This is not about who is hawkish in the same way John McCain is about foreign policy, because if you look at Iran and Libya, Susan Rice checks those boxes. This is a personal vendetta. It’s about presidential authority.”
Host Chris Matthews: “So, you think McCain is being — McCain and people like Lindsey Graham, McCain, who had his own daughter attacked, where he was accused of having an illegitimate child when, in fact, he adopted a young girl from South Asia — you’re saying that McCain’s being driven by racial prejudice here?”
Wolffe: “There is no other way to look at this....” 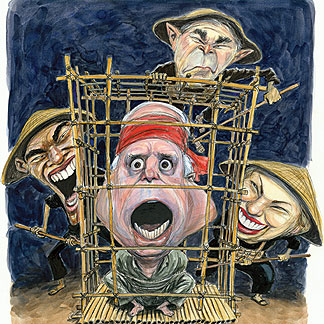 Rolling Stone’s Matt Taibbi, in June 2008, penned an anti-McCain screed “Full Metal McCain Haunted by the ghosts of Vietnam, the one-time maverick has transformed himself into just another liberal-bashing fearmonger.”

The article was accompanied by an offensive cartoon depicting the former POW McCain being tortured by his political opponents. Taibbi snidely wrote: “John McCain has chosen this moment to mount his first general-election attack against the Great Satanic Liberal Enemy — who, as luck would have it, turns out to be a Negro intellectual from Harvard who’s never served in the military....McCain pegs Obama as a man who wants to take America ‘backward,’ to the failed ideas of the Sixties. ‘I’m surprised that a young man has bought into so many failed ideas!’ he says, to furious applause. Then, spitting out a forced, ugly laugh that he must have practiced many (but not enough) times in the bathroom mirror of the Straight Talk Express, he adds, ‘That's not change we can believe in!’”

In 2008 The Atlantic hired lefty photographer Jill Greenberg to shoot McCain for is October issue. Goldberg took some 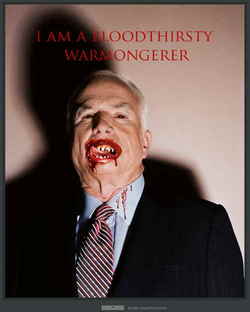 disturbing pictures of McCain, that she hoped would be featured in the magazine — including one that was doctored to show him with blood dripping from his mouth. She proudly displayed those pictures on her website.

On July 25, 2017 when it looked like McCain was going to vote to end ObamaCare (before he eventually voted to save it) MSNBC’s Joy Reid trashed him in a tweet: “So it happened. McCain returned to the Senate to a standing ovation, and promptly voted to take away millions of people’s healthcare.”

But of course, there were the many, many times when the liberals in the press loved their “maverick” McCain. Those times when he could be conveniently used to castigate conservatives and their policies.

The following is just a sample of those moments, as culled from the MRC archives:

“Well, however brave a stand campaign finance reform may be, members of your own party have rejected it. What’s the matter with them? Why don’t they get it?”
— Good Morning America co-host Diane Sawyer to Senator John McCain, September 27, 1999.

“Something is going on. I mean I wrote about McCain, as you know, in the December issue of Vanity Fair and he has this remarkable appeal. He’s a down the line conservative. He’s voted for every item in the Contract for America and yet he has this appeal to centrists and even some liberal Democrats despite a rather reactionary record in many ways. He is evolving.”
— Carl Bernstein on CNBC’s Rivera Live the night of the New Hampshire primary, February 1, 2000.

“For weeks now, we’ve had a projected winner in the press primary. The same profane maverick who drives Republican Party regulars to distraction is beloved by the ever-expanding throng of vaguely liberal, if increasingly unideological, reporters and talking heads. It’s swoon season on John McCain’s bus, the ‘Straight Talk Express.’ One famous network correspondent was heard telling colleagues recently that he might even quit his million-dollar-plus job and volunteer in a McCain White House.”
— Newsweek’s Jonathan Alter, November 8, 1999.

Anchor Charles Gibson: “A lot of Democrats say a dream ticket would be if John Kerry would reach across the aisle, take you as a vice presidential candidate. Are you going to say no? No how, no way, won’t do it?”
Senator John McCain: “Charlie, it’s impossible to imagine the Democratic Party seeking a pro-life, free-trading, non-protectionist deficit hawk....”
Gibson: “But let me, let me imagine it....”
— ABC’s Good Morning America, March 10, 2004.

“[Senator John] McCain says that code of honor drilled into him by his father and the Naval Academy is why he was able to survive the torture and the inhumanity of his prison captors [in North Vietnam]....I thought about that as yet another tale of torture and abuse came out about the POW camp we are running at Guantanamo Bay.”
— CBS’s Bob Schieffer ending Face the Nation, May 29, 2005.

At Least McCain Believes In Global Warming, Unlike Those Other GOP Nuts

“He [McCain] makes it clear he believes there is this problem, Jeffrey, called global warming, in marked contrast to a lot of other Republicans out there who aren’t yet convinced that this is a serious problem.”
— Anchor Wolf Blitzer on CNN’s The Situation Room, May 12, 2008.

“In the well of the Senate, it came down to one very dramatic moment. Senator John McCain walks in, asks to be recognized, raises that right arm broken three different places in North Vietnam, a quick indicator with a thumbs down....Much was made of that moment, a moment of moral courage, a man staring down his own mortality yet again, not the first time in his life. But let’s also talk about the courage of Murkowski of Alaska and Collins of Maine, because without those two women, there is no moment like that for John McCain. My question to you: Is that kind of courage, for people cheering them on, going to be contagious?”
— Host Brian Williams to former radio talk show host Charlie Sykes on MSNBC’s The 11th Hour, July 28, 2017.