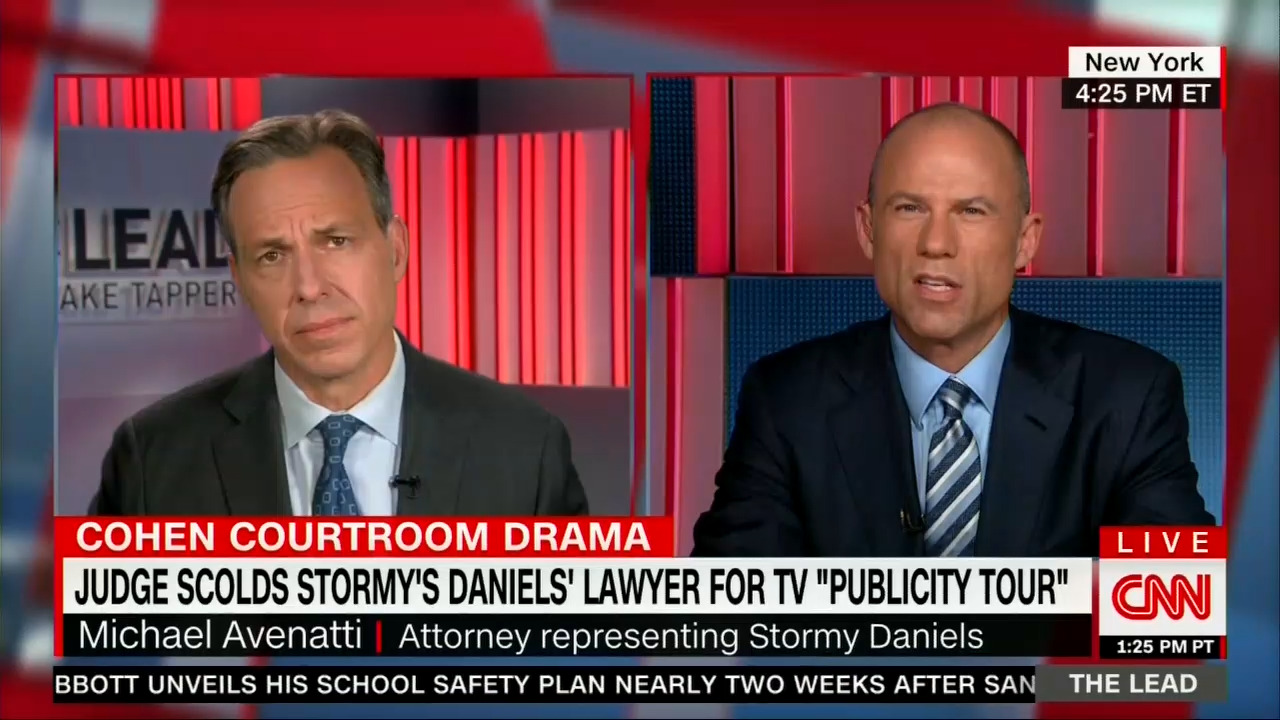 Network and cable channels couldn’t get enough of Michael Avenatti, granting Stormy Daniels’ personal attorney a whopping 162 interviews in the past 12 weeks (March 7 through May 30).

On Wednesday, Newsweek reported: “U.S. District Judge Kimba Wood heard arguments from Daniels’s attorney, Michael Avenatti, as well as representatives for Cohen and Trump, over whether Avenatti would be allowed to participate in the case. Daniels, whose real name is Stephanie Clifford, has also filed a suit against Cohen, claiming a nondisclosure agreement she struck with Trump is null and void. Avenatti would have to stop claiming publicly that Cohen is guilty so as not to taint a potential jury, Wood said. ‘I say ‘publicity tour’ not in a derogatory sense,” she said. “You’re entitled to publicity, I can’t stop you. Unless you’re participating in a matter before me.”

Avenatti actually popped up on the May 30 edition of CNN’s The Lead with Jake Tapper, where the host brought up the judge’s admonition:

JAKE TAPPER: The judge was kind of tough on you today. She said you can’t be a party in the courtroom and also continue what she called your “publicity tour.” You ended up withdrawing your motion to appear in the New York federal court case against Cohen. Why do that? Why is that in the best interest of your client? It seems to a layman that the judge said you can either be on TV or you can be in this courtroom. You can’t be both, and you chose to be on TV. Am I wrong?

MICHAEL AVENATTI: You are wrong. That’s not what the judge said. First of all, we withdrew the motion, Jake, because it’s not necessary at this point, because our motion to intervene has been tabled by agreement between us and the government. The motion to intervene may never be heard. So I may never need to be admitted into her courtroom. So that’s first of all, and second of all, we’re going to continue to disclose facts and evidence the American people. People overwhelmingly have supported what we’ve done in huge numbers. They’re continuing to support what we do, and we’re not going to stop, and we’re not going to change our approach, period.

HOST CHUCK TODD: Last quick question, and I apologize for making you answer quickly. If you were in the Southern District of New York would you find Michael Avenatti an asset or a liability?

FORMER ASSISTANT U.S. ATTORNEY, SOUTHERN DISTRICT OF NEW YORK DANIEL GOLDMAN: If I were prosecuting this case right now in the Southern District of New York, I would probably find him to be a little bit of a liability, in the sense that I think he is trying to interject himself in this case where he really doesn’t have a strong reason to be there. And even today after that court hearing he ended up withdrawing his motion to intervene in the case.

GOLDMAN:  So it depends – a lot of it is inside baseball. But it depends on if he is asserting the privilege of Stormy Daniels, then that means the investigation may be impaired to get to the bottom of what actually happened between stormy Daniels’s previous attorney and Michael Cohen. And there were allegations that they were sort of in cahoots. But they not be able to get to the bottom of that if Avenatti is involved.

On Wednesday, all together, Avenatti added a total of four stops to his “publicity tour” appearing on CNN’s The Lead With Jake Tapper, as well as MSNBC’s The Beat with Ari Melber; MSNBC Live with Craig Melvin and MTP Daily.

For more on NewsBusters' Avenatti coverage please click these links: