FLASHBACK: Before They Loved James Comey, the Liberal Media Trashed Him 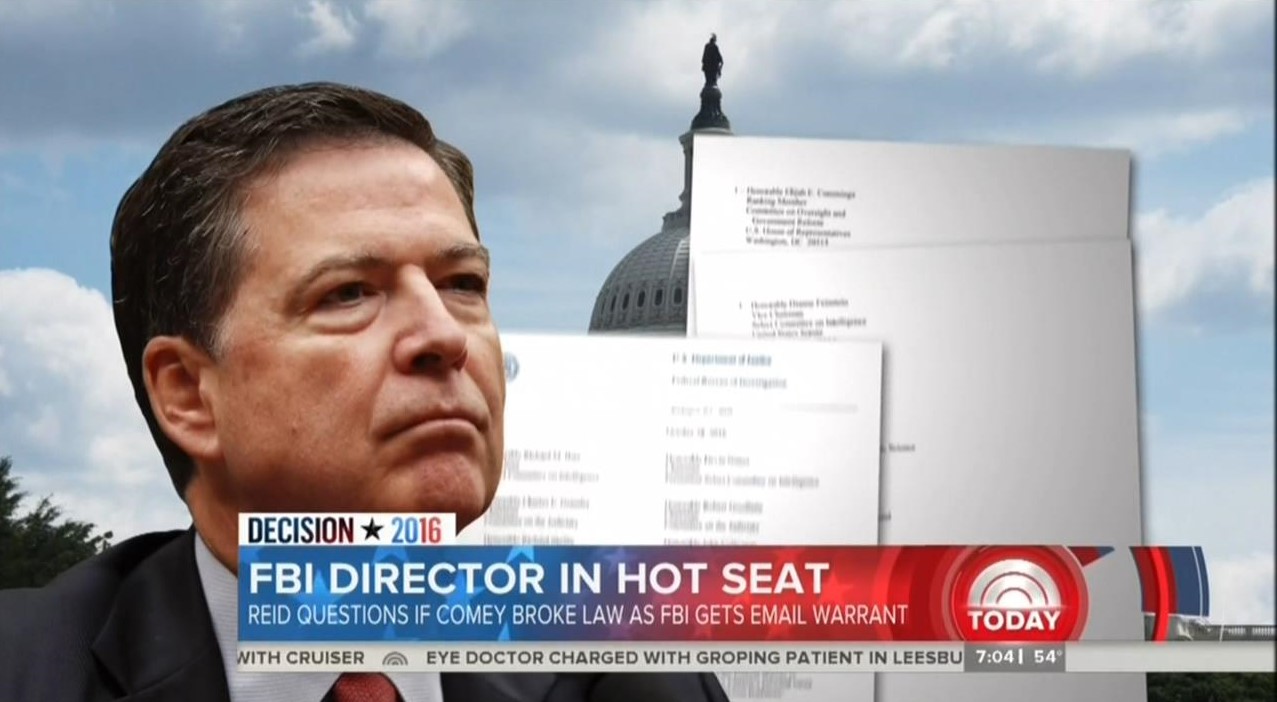 The hype for James Comey’s book tour (set to launch on ABC Sunday evening with an hour-long George Stephanopoulos special) began last November 2 when CBS’s Gayle King teased it during an interview with the former FBI director: “We’re getting a first look this morning at fired-FBI Director James Comey’s new memoir....His publisher says the book will explore good, ethical leadership.” Co-host Norah O’Donnell exclaimed: “Something tells me that’s going to be a good book!”

And while liberal journalists are clearly hoping for Comey to dish the dirt on President Donald Trump, there was a time when they hammered him as a partisan hack whose investigation into then-candidate Hillary Clinton’s e-mail scandal was sneaky sabotage of an all-but-certain Democratic victory in 2016.

Just days before Election Day – when Comey announced that FBI was pursuing new leads into the investigation Clinton’s e-mail server scandal – CNN’s senior legal analyst Jeffrey Toobin called it a “stink bomb.” On the October 30 edition of NBC’s Meet the Press moderator Chuck Todd wondered if “Comey has put the finger on the scale for Donald Trump.” His colleague Andrea Mitchell fretted “This is just the worst possible situation for the FBI, for the country, for Hillary Clinton.”

At that time The Big Three (ABC, CBS, NBC) networks went into attack mode against Comey, turning what should have been a scandal about Clinton into a rampage against the FBI director. From October 28 through October 31, 2016  MRC analysts reviewed all statements (by reporters, analysts, and partisans) that took a position on Comey and Clinton and found criticisms of Comey (88) swamped those of Clinton (31) by a ratio of almost 3 to 1. There were a handful of statements that praised either Comey (10) or Clinton (4). 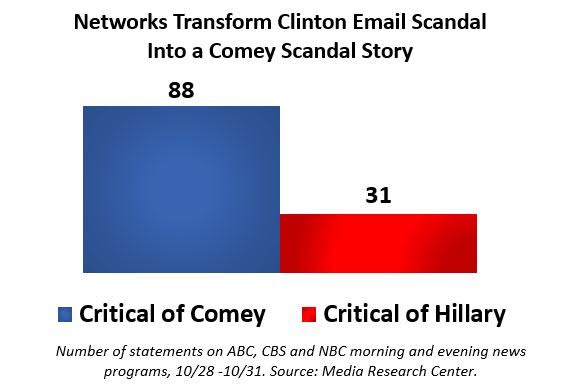 The following are just some of the media’s worst overreactions to Comey’s investigation of Clinton during and even after the 2016 campaign:

“Even I, as a lowly assistant U.S. Attorney in the 1990s, knew there was a bedrock principle at the Justice Department....you don’t interfere in elections. Two months before, you go dark. You don’t start making public disclosures. You don’t issue subpoenas, you don’t issue indictments on the eve of election and I don’t see what possible justification James Comey had to violate that principle....Why throw that stink bomb at the very end of the campaign?”
— CNN legal analyst Jeffrey Toobin on CNN Newsroom with Brooke Baldwin, October 31, 2016.

Comey “Put the Finger on the Scale” for Trump

“John Podesta, the campaign chairman wrote on Medium, he said, ‘By being vague and obfuscating, Comey opened the door to conspiracy theories’ – which you’ve been saying. And there’s now a surge of fund-raising for Trump and his team. Do you think Comey has put the finger on the scale for Donald Trump?”
— Moderator Chuck Todd question to Clinton campaign manager Robby Mook on NBC’s Meet the Press, October 30, 2016.

“This is just the worst possible situation for the FBI, for the country, for Hillary Clinton certainly....If she’s elected, she has to live with James Comey who has a ten-year term. That is a very hostile situation and a dangerous situation.”
— Correspondent Andrea Mitchell on NBC’s Meet the Press, October 30, 2016.

“A lot of Democrats are incensed by James Comey’s actions. Dianne Feinstein, senator Dianne Feinstein, called his actions ‘appalling.’ Howard Dean, former Democratic candidate for president, says, quote, ‘He may have destroyed the credibility of the FBI forever. Put himself on the same side as Putin.’ Do you agree with that?”
— Moderator George Stephanopoulos to Democratic vice presidential nominee Tim Kaine on ABC’s This Week, October 30, 2016.

Correspondent Andrea Mitchell: “The 2016 campaign now again turned upside down by FBI Director James Comey, this time deciding that those Hillary Clinton e-mails on Anthony Weiner’s laptop were either all duplicates or not related to government business. The question is now, though, is it too late to undo the political damage?....Can the e-mail damage be undone? With polls opening just 24 hours from now, the Clinton campaign worries the good news may not catch up to the bad news of Comey’s first letter 10 days ago.”...
Meet the Press host Chuck Todd: “I think at the end of the day, we’re going to look back and say, this may have cost the Democratic Party one or two Senate seats. What this also did down the ballot to galvanize Republicans to basically vote like Republicans again....we may look at the makeup of the Senate and say, a Comey effect.”
— NBC’s Today, November 7, 2016.

Host Chris Hayes: “Whether or not Comey’s intervention has affected the presidential race, it’s clear that his disclosure and the spate of now competing, one might say warring FBI leaks that have followed have raised serious questions about the FBI’s integrity and impartiality.”...
American Urban Radio Networks correspondent April Ryan: “What does this do to an election a few days out? And it sets a precedent. It’s a bad precedent. We’ve never seen this before.”
Hayes: “Nope.”
Ryan: “And I just tell you, the integrity of Comey as well as the FBI is in question. It makes you wonder. You go back in history and think about some of the things we read in the history books about things that were happening to leaders like Dr. King and others. You know, you just wonder, you just wonder.”
— MSNBC’s All In with Chris Hayes, November 2, 2016.

“Since President Obama named James B. Comey director of the F.B.I. in 2013, the 6-foot-8 former prosecutor has spoken often of dark chapters in the bureau’s history, notably J. Edgar Hoover’s order to wiretap the Rev. Dr. Martin Luther King Jr. and use the tapes to try to drive the civil rights leader to suicide. ‘The reason I do those things,’ Mr. Comey said in a talk at Georgetown University last year, ‘is to ensure that we remember our mistakes and that we learn from them.’ His point: The nation’s leading law enforcement agency must preserve investigations from any taint of political motive or extralegal influence. So it may be especially painful to Mr. Comey that today, after his second sensational public statement on the F.B.I.’s investigation of Hillary Clinton’s email, some critics and historians are comparing him to Hoover....But before Mr. Comey, Hoover was the last F.B.I. director to be accused – at least by some historians – of trying to influence a presidential election, by feeding useful scraps of information on Harry S. Truman, a Democrat, to the campaign of Thomas E. Dewey, a Republican.”
— Scott Shane and Sharon LaFraniere in October 31, 2016 New York Times article.

Clinton Team “Upset” with Comey and “They Should Be”

Co-host Mark Halperin: “James Comey is getting horrible advice. He is interfering in this election, he is responding to Congress. Congress has no business knowing about the closing and opening of criminal probes. I don’t understand what the guy is doing. But from a pure political point of view: It’s a nightmare for the Clinton administration – campaign. I know why they’re upset, they should be.”...
Co-host John Heilemann: “At this moment it does seem like we have a problem with the FBI Director. And I actually think whether you are a Democrat or a Republican. If you are just looking on the merits, you would agree on the one thing – one thing that John Podesta said –  which is that James Comey should come out, and stand  in front of a podium and explain what the hell you’re doing here.”
— Bloomberg New’s With All Due Respect, October 28 2016.

Host Anderson Cooper: “Jeff, first of all, on this whole Marc Rich document dump from the FBI, is it just a coincidence that it happened now?”
Senior Legal Analyst Jeffrey Toobin: “Well, perhaps. It is certainly bizarre....Coming on top of the director, Comey’s very unusual and controversial release last week, it just makes the FBI look like a wing of the Republican party.”
— CNN’s Anderson Cooper 360, November 1, 2016.

Comey “Destroyed” His Reputation by “Trying to Swing “Election”

“If we don’t hear more from Comey, we just have to conclude that he was trying to swing election. And *that* should be the story.”
— October 28, 2016 tweet by New York Times columnist Paul Krugman.

“Mr. Comey was subjected to a constant barrage of demands that he prosecute her for...something. He should simply have said no. Instead, even while announcing back in July that no charges would be filed, he editorialized about her conduct – a wholly inappropriate thing to do, but probably an attempt to appease the right. It didn’t work, of course. They just demanded more. And it looks as if he tried to buy them off by throwing them a bone just a few days before the election. Whether it will matter politically remains to be seen, but one thing is clear: he destroyed his own reputation.”
— New York Times columnist Paul Krugman in October 31, 2016 article “Working the Refs.”

“Comey has said high-profile investigations make him feel pressured to things quickly, and do it well. Tonight, his critics are wondering if he has failed on both counts.”
— Correspondent Jeff Pegues on CBS Evening News on October 28, 2016.

“Unprecedented” That FBI Director “Injected” Himself Into Political Process

“What is also striking is the extent to which the FBI director of the United States is allowing himself to be injected into this political campaign. Unprecedented that he would have released the information he released after a decision not to recommend indictment.”
— Former NBC’s Meet the Press host and CNN political analyst David Gregory on CNN’s Wolf, October 28, 2016.

Hillary Lost Because of Sexism in Comey’s FBI?

“I think what Jim Comey did was to throw overboard Justice Department procedures because of political reasons – his own internal politics – because of the hatred for Hillary Clinton within the FBI and because of this delicate balancing act he was trying to pull off with Republicans in Congress principally. And I think that, that was a horrendous decision on his part and one that he should and probably does regret. I think there was misogyny. And I think we tolerate sexism in this country, whether it’s in, you know, the legal profession or corporations or in our politics.”
— CNN political analyst David Gregory on CNN’s New Day, May 3, 2017.

Pressing for Comey to Resign

Bernie Sanders: “I think that Comey acted in an outrageous way during the campaign. And, you know, no one can say that this was the decisive and this was what elected Trump, but clearly his behavior during the campaign in terms of what he said in the week or two before the election was unacceptable. And it is interesting that he is not doing investigations about the possible – possible ties between Trump’s campaign and the Russians.
Moderator George Stephanopoulos: “Should he step down?”
— ABC’s This Week, January 15, 2017.