Worst of the Month: Media Compare Trump to Stalin, Mussolini and a Slave Owner 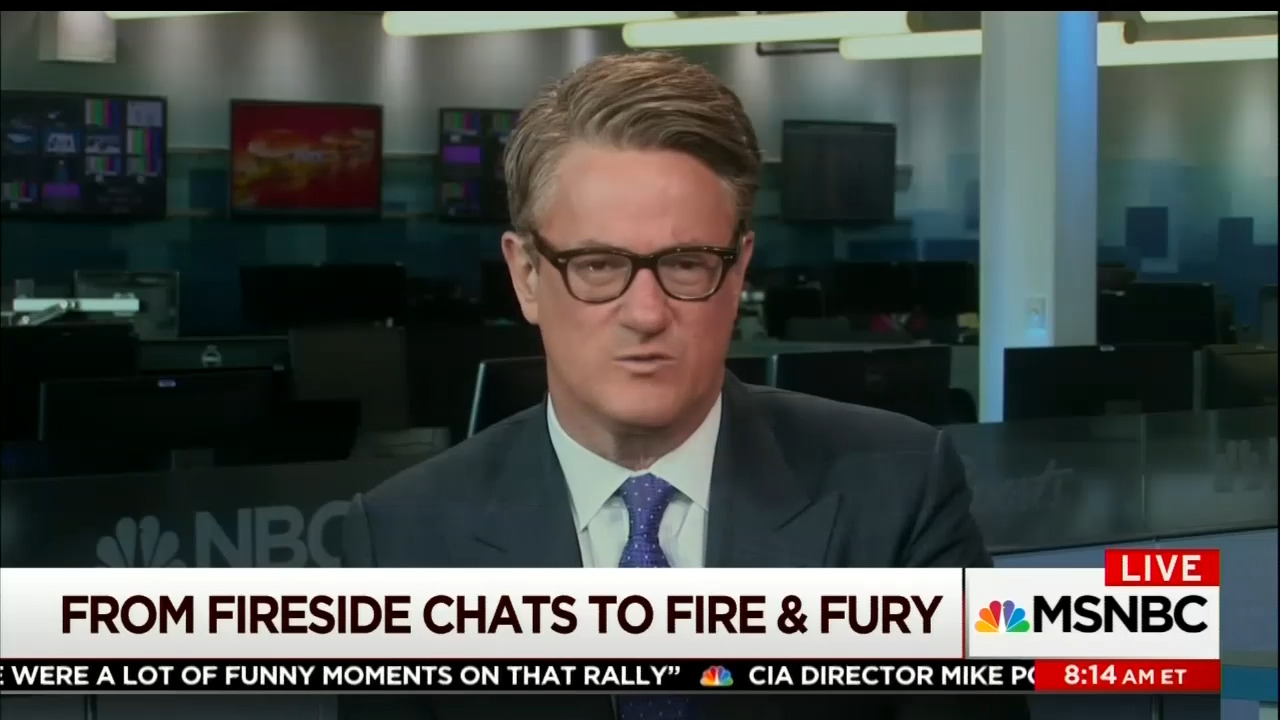 Liberal reporters, hosts, analysts and Hollywood types have been in overdrive, seemingly trying to outdo each other in their insults of President Donald Trump. In the past month, Trump has been compared to dictators Joseph Stalin and Benito Mussolini. He was even depicted as a slave owner.

When Trump jokingly referred to NBC’s Meet the Press host Chuck Todd as a “sleeping son of a b*tch” MSNBC’s Joe Scarborough overreacted, as he compared Trump to Joseph Stalin and sneered that a Trump stump speech reminded him of a “Mussolini rally.”

Scarborough’s colleague MSNBC contributor Jason Johnson had a similar overreaction when he said Trump’s mocking of ultra-liberal Democratic Congresswoman Maxine Waters reminded him of the fictional slave owner played by Leonardo Dicaprio in the 2012 movie Django Unchained: “If black women aren’t working for him, and they aren’t there to serve him in some personal way, he’s basically Calvin Candie.”

There was some pretty sick stuff coming out Hollywood as well, with singer/actress Barbra Streisand blaming the President for the Parkland, Florida shooting: “I think even that shooter was affected because Trump brings out the violence in people.”

The following are the worst attacks against Trump and conservatives over the last month from lefty journalists and celebrities:

“Evil” “Mussolini” Trump Whipping up “Death Threats” to the Press

“He [Donald Trump] talked about the fake media [to] get people booing. The booing is getting stronger by the day, whenever he [Donald Trump] goes out there and whips people up, it’s like a Mussolini rally. And yes, that’s what I said....When you rip your supporters into a frenzy there are real life consequences to that. Threats follow, often death threats....Unfortunately that’s exactly what he wants.”
— Host Joe Scarborough on MSNBC’s Morning Joe, March 12.

“We’re amusing ourselves to death....and we lose our ability to function as rationally informed citizens every time we chuckle or smile at something he [Donald Trump] says! What he did at that rally....It’s evil and the stuff he said about Chuck Todd is dangerous, but too many people are smiling at it, and even some are applauding. Very dangerous.”
— Baltimore Sun media critic David Zurawik during discussion about President Trump calling NBC’s Meet the Press host Chuck Todd a “sleeping son of a b*tch” as aired on CNN’s Reliable Sources on March 11.

“Times such as these do demand that our team beats back against the tide of brutish threats from the President and from some of his allies. We also know that it’s our responsibility to call out those times when constitutional norms are being challenged, those times when the President of the United States actually channels Joseph Stalin and calls the media ‘the enemy of the people.”
— MSNBC host Joe Scarborough accepting award at Radio Television Digital News Association dinner on March 8.

“One thing we’re not is the opposition. We’ve never tried to be part of the political debate, but people want to drag us into it. We shouldn’t take the bait. We’re simply a voice of truth. There’s no balance, there’s just fairness and truth. And a true voice and the truth is what we all need to be hearing right now. A voice that no matter how many disparaging tweets or calls of fake news, we can’t let it be silenced.”
— NBC Meet the Press host Chuck Todd at Radio Television Digital News Association dinner on March 8.

There’s a “Sociopath” in the White House

“I don’t think he’s [Donald Trump] capable of the basic empathies that we feel as human beings, and that’s what a sociopath is....When we see children dying, we as humans, we as parents, feel a certain way. I honestly don’t think it translates to him, and that’s what makes him a sociopath.”
— Political analyst Donny Deutsch on MSNBC’s Deadline: White House, March 12.

“I have to let you know how it is for us now. We had you. We had the Obamas in the White House. Even on a bad day, you had a north star. You had some hope. And then it was like the universe looked just said, psych! And threw us in the toilet and closed the lid and now we’re just stuck in this crazy situation, swirling.”
— Host Van Jones question to Oprah Winfrey as aired on CNN’s The Van Jones Show, March 11.

MSNBC Viewers Could Use One of Those

“You know how there’s always a signer at any event, someone signs for the deaf? I think there should be a truth teller in the corner of every Trump event who is, you know, sort of holding a scroll and sort of saying ‘lie.’ Or, you know, like, he wants everything in handwriting. Hold up the gymnastics scores. Lie. I mean, literally, I’ve never seen anything like it!”
— Host Nicolle Wallace on MSNBC’s Deadline: White House, March 6.

NBC News reporter Heidi Przybyla: “To this particular comment [Trump joking that he thinks China abolishing term limits “I think it’s great. Maybe we’ll have to give that a shot some day.”] on China, I actually can’t think of something that is more counter-cultural to Americans because if there’s one thing that binds us all together as Americans it’s that many of us can point back to someone in our family who either fled or fought a dictator, whether it was Stalin or Italy, all of us, that is the one thing that binds us together is that we never want something like that here. We never want something like that here.”
Co-host Joe Scarborough to co-host Mika Brzezinski: “Both of your parents fought Hitler –  which is why your father was so extreme correctly on the issue of totalitarian leadership.”
Brzezinski: “And how dangerous this president is.”
— MSNBC’s Morning Joe, March 5.

Host Brian Stelter: “Even if President Trump prefers to live in a fantasyland, journalists have to at least try to help him see the reality... Dan Rather, as someone who has been covering presidents for decades, have you seen this kind of fantasyland thinking or behavior before?”...
Former CBS Evening News anchor Dan Rather: “We’ve never seen anything like this. This is new and I do think that most people get it. That most people understand that they’re facing, on a daily basis from the White House and from the President himself, the rough equivalent you’re facing a fertilizer spreader in a windstorm...If journalists cower, then how long can we sing we’re the home of the brave?”
— CNN’s Reliable Sources, February 25.

Democrats Need to Take Advantage of Trump’s “Racism and Bigotry”

“Big opportunity for Democrats. I think we watch the marches that are coming up because I think we see a lot of that happening in the streets of America as the president breaks promise after promise on guns and DACA and you see racism and bigotry and misogyny seeping through this presidency. At some point, Democrats have to take hold of the message.”
— Co-host Mika Brezezinski on MSNBC’s Morning Joe, March 5.

Old Viewers of Conservative Media Just Need to “Die Off”

Host Joy Reid: “At some point, does the conservative media run out of viewers because it is appealing to sort of an old kind of crusty, creepy, weird world view that these young people who are a big, big cohort of the American population do not share?”
Former Breitbart consultant Kurt Bardella: “I think there is some credence to the idea that, at some point, just the process of evolution, some of these viewers, they are gonna thankfully die off, and that’ll be the end of that.”
— MSNBC’s AM Joy, March 5.

Trump Is “Half a Rally Away from Using the N-Word”

“He’s [Donald Trump] half a rally away from just using the N-word. It’s that basic. He’s half a rally away from just calling somebody the N-word, and then everyone’s going to pretend that they’re shocked, and everybody on The Apprentice is going to say, ‘He used it all the time –  that’s what he does. He has a hostility and an anger towards women of color....If black women aren’t working for him, and they aren’t there to serve him in some personal way, he’s basically Calvin Candie [Fictional slave owner from the 2012 film Django Unchained.] He is angry and hostile towards women.”
— The Roots politics editor and MSNBC contributor Jason Johnson discussing Donald Trump insulting Democratic Representative Maxine Waters as aired on MSNBC’s Hardball, March 13.

GOP = The Party of Trump and the KKK

Who Will Stand Up to “Authoritarian” Trump?

“I think what we saw over the weekend were the actions of a would be, wannabe, authoritarian and not a very good one, but definitely wanna be authoritarian. I am praying and hoping for courage out of Congress. Please, use your voices. Do it for the country.”
— Co-host Mika Brzezinski on MSNBC’s Morning Joe, March 19.

“Disturbed” Trump Is Either “Compromised” By Russia or a “Towering Fool”

“Our President is a disturbed person, and he’s behaving in ways that are simply inexplicable that tell you that he is either compromised because the Russians have been funding his company in ways that he’s, he would find embarrassing if publicly disclosed....Or he’s compromised because of, maybe, behavior he engaged in while in Moscow, or he is simply a towering fool who is ignoring the advice of his intelligence chiefs being made in public.”
— New York Times columnist Thomas Friedman on CNN New Day, February 21.

Mika Manages to Attack Two Constitutional Amendments in One Sentence

“The NRA with their inflammatory ads and threatening ads should be sued and forced to take them down.”
— Host Mika Brezezinski on MSNBC’s Morning Joe, March 19.

“Trump is such a bully. I almost – and I hate to say this. You know, why hasn’t anybody taken him out back and kicked his little butt?”
— Co-host Sunny Hostin on ABC’s The View, March 22.

Babs Babbles About Trump and Conspiracies

“I really believe she won the election. I’ve talked to senators from Michigan and Wisconsin. I do believe, like I believed during Bush, they were playing with those voter machines. And [Al Gore] lost by 537 votes out of 104 million. And now, in retrospect, Bush looks quite good compared to Trump. At least he’s not mean-spirited. He’s not a guy who is retaliating for what Obama did at the White House Correspondents’ Dinner....I think even that shooter [Parkland, Florida] was affected because Trump brings out the violence in people. He says, ‘It’s ok – rally, lock her up.’”
— Singer/actress Barbra Streisand in an interview for the February issue of Variety magazine.

Time to Haul Trump Away in a Truck

“As a country, we lost respect, decency, civilized behavior, integrity, class, accountability, responsibility. He’s [Donald Trump] got none of that. He’s got none of that....Get him out of here, back the truck, throw him in the back of the truck and take him away.”
— Actor Jeff Daniels on CBS’s Late Show with Stephen Colbert, March 1.

Holocaust survivor/former Tonight Show with Johnny Carson producer Peter Lassally: “In the middle of the night, word comes into the barracks, everybody outside, form a formation. You didn’t know whether, A, it was a transport going out to another concentration camp. Or you’d stand there for hours in the rain, in darkness....And they did it just to scare you and make you nervous. They always had you off balance.”
Correspondent Mo Rocca: “So that you were always scared?”
Lassally: “Always scared. Always scared. Which is what our president is doing.”
— Interview with concentration camp survivor and former producer of NBC’s The Tonight Show with Johnny Carson and CBS’s Late Show with David Letterman Peter Lassally as aired on CBS Sunday Morning, March 11.