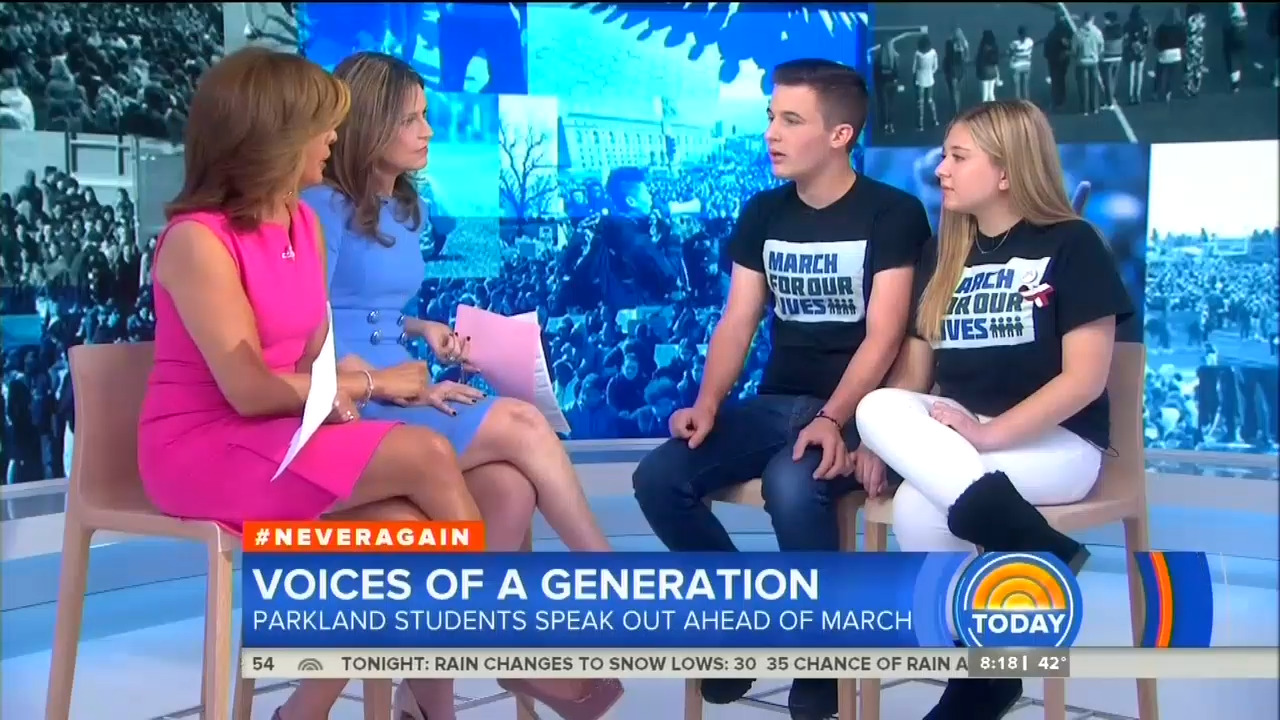 Saturday’s “March for Our Lives” represents the culmination of more than a month of the liberal media’s seemingly endless parade of soundbites and interviews featuring the strident and, at times, vicious anti-gun statements from Marjory Stoneman Douglas High School students, teachers, parents and their allies in the Democratic Party.

Since February 15 (the day after the Parkland, Florida school shooting) through March 19, the Big Three (ABC, CBS and NBC) morning and evening news programs  have aired a whopping 69 stories, plus an additional nine interviews, talking about the students’ anti-gun efforts. During that same time, these networks failed to run even a single story mentioning any of the students from the same high school (like Kyle Kashuv) who have openly championed the Second Amendment.

In fact, network stories featuring these students have amounted to uncritical advertising for their anti-gun views, with almost no dissenting opinions were allowed. Looking just at the airtime of soundbites in these stories and interview segments, gun rights opponents received 71.5 minutes, roughly eleven times more coverage than pro-gun rights voices (6.5 minutes). If you blinked, you missed the rare moments when pro-gun advocates (like NRA spokesperson Dana Loesch) actually got a word.

In other words, the networks framed their post-Parkland coverage around the student-led movement’s liberal agenda, and rarely bothered to introduce competing opinions into these stories. 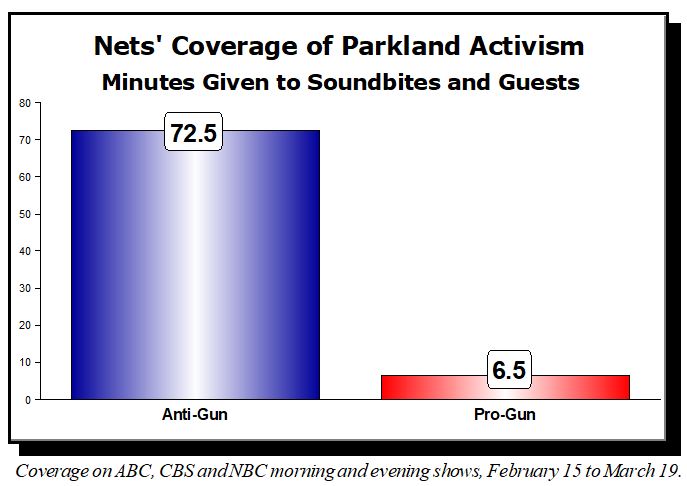 CBS handed over the most amount of time (28 minutes, 8 seconds) to anti-gun rights talking heads and guests. The pro-gun rights side was allowed a mere one minute and 30 seconds on CBS’s evening and morning shows.

NBC offered 21 minutes and 8 seconds of airtime to gun control activists to just one minute and 37 seconds to Second Amendment supporters.

Even the nastiest soundbites or statements from anti-gun rights advocates were rarely challenged by the reporters and anchors on ABC’s World News Tonight and Good Morning America; CBS Evening News and CBS This Morning; and NBC Nightly News and Today show.

When Marjory Stoneman Douglas student Ryan Deitsch, on the February 22 Good Morning America, attacked Republican Senator Marco Rubio for taking money “from an organization [NRA] that has been known to help in the aiding of killing innocent lives” anchor George Stephanopoulos let the disgusting claim go by unchallenged.

The horrific accusation, like the one made by student Sheryl Acquarola that “the next death on someone with an assault rifle here in Florida is going to be on [Florida Republican legislators]. It’s going to be on them and it’s going to be their fault,” was unchallenged by CBS correspondent Adriana Diaz on the February 21 CBS This Morning.

SAVANNAH GUTHRIE: And, David, how do you keep it going? I mean, I think, today is a big moment. There will be a walkout. You’ve got the march ten days from now, I think. But how do you, how do you keep the momentum going? Because unfortunately, we’ve seen this cycle of outrage; in some cases, action; and then, it`s back to normal.

MARJORY STONEMAN DOUGLAS STUDENT DAVID HOGG: The main way that I can see the momentum really continuing is if we had a walkout every 14th, until legislative action is taken in the United States Congress by these politicians that haven`t taken action for so long. So that we can stand up as Americans and fight for our lives when no one else will.

However, not all of the Parkland students have been campaigning for more gun control. Stoneman Douglas student Kyle Kashuv, a proud supporter of the Second Amendment who has met with leaders on Capitol Hill and has appeared on Fox News has YET to be seen on any of the Big Three networks.