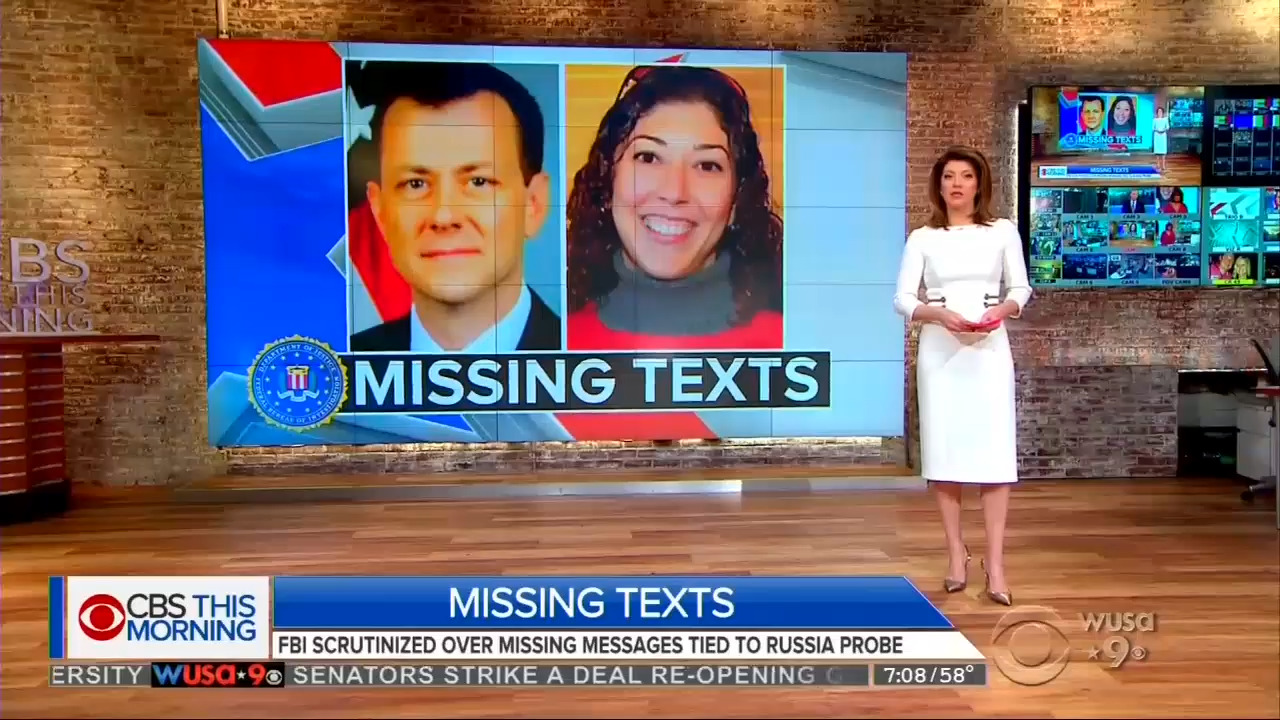 Correction: A previous version of this blog mistakenly reported there were 50,000 missing texts.

As much as five months worth of texts between two anti-Trump officials at the FBI are missing, but ABC and NBC have yet to report on this stunning development. The missing texts story first broke on Sunday night and while Fox News was on top of story, the Big Three (ABC, CBS, NBC) stories had completely ignored it –  until CBS This Morning finally arrived on it in a three-minute Paula Reid segment on Tuesday’s show.

On Monday, Attorney General Jeff Sessions announced that the Department of Justice is now looking into 50,000 text messages (That number does not include the five months’ worth of missing texts) exchanged between two anti-Trump FBI officials Peter Strzok and Lisa Page. President Donald Trump also tweeted about the revelations on Tuesday morning. But the Sessions announcement and Trump tweet failed to spur either ABC or NBC into covering the evidence of clear anti-Trump bias at the FBI.

The following is the sum total of network coverage of these developments (3 minutes, 1 seconds) as it was aired on the January 23 edition of CBS This Morning:

NORAH O’DONNELL: Attorney General Jeff Sessions promises to leave no stone unturned to find missing text messages tied to the Russia investigation. Republicans say the texts may show bias by the FBI’s Peter Strzok and Lisa Page who once worked for special counsel Robert Mueller. Well this morning on Twitter, President Trump called it one of the biggest stories in a long time writing, quote “The FBI now says it’s missing five months worth of lovers Strzok-Page texts, perhaps 50,000, and all in primetime! Wow!” exclamation point. Paula Reid is tracking the investigation. Paula, good morning.

PAULA REID: Good morning. Now Strzok played a key role in the Clinton e-mail investigation and was then assigned to the Mueller probe, but he was dismissed after his anti-Trump text messages were discovered. And now the revelation that the FBI was not storing many texts during this critical period between the presidential transition and the day Mueller was appointed is setting off a political firestorm.

REP. JIM JORDAN: We need to get to the bottom of it and find out what exactly happened.

REID: Republicans in congress are asking why hundreds of messages are missing between FBI officials Peter Strzok and Lisa Page who exchanged thousands of texts frequently discussing the Clinton investigation as well as their dislike of Trump. In one from February, 2016, page texted Strzok, then candidate-Trump “simply cannot be president.” In another, Strzok calls Trump an idiot and awful.

JAMES COMEY: No charges are appropriate in this case.

REID: Strzok and Page also discussed Comey’s statement exonerating Hillary Clinton’s use of a private e-mail server. An earlier draft noted Secretary Clinton e-mailed with President Obama from her private server. But the sentence was later edited to replace “the president” with “a senior government official.” Strzok and Page also discussed using non-work phones to talk about Clinton so “it can’t be traced.” During the Department of Justice’s investigation into Strzok, it found texts were missing between December 14th, 2016, and May 17th, 2017. Those dates span the presidential transition and the day Robert Mueller was appointed. The FBI blames software and technical issues saying employees with many Samsung 5 mobile devices did not capture texts during that time. Last month on Face the Nation, Republican Senator James Langford said Strzok’s comments are also calling into question his role on the Mueller probe.

SEN. JAMES LANGFORD: It’s clear this individual within the Mueller team that was also on the Clinton e-mail investigation team had a strong bias against now-President Trump.

REID: Yesterday, FBI director Chris Wray visited the White House to discuss the five months of missing texts that appear to impact many more agents in addition to Strzok and Page. Now Strzok is expected to testify on Capitol Hill soon, but a date has not been set. Gayle?

GAYLE KING: Alright, a lot to discuss there too. Thank you very much, Paula.