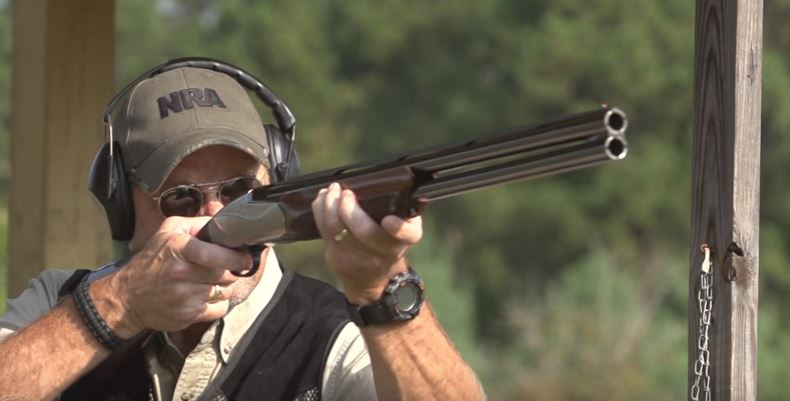 The media’s inevitable exploitation of the Las Vegas shooting to rip up the Second Amendment was sickeningly swift. Not even 24 hours passed before journalists had began badgering politicians for more gun control and even worse, disgustingly blaming gun owners for the bloody attack. One CBS employee actually said she wasn’t “even sympathetic” because “country music fans often are Republican gun toters.”

On NBC, former Nightly News anchor Tom Brokaw used the Today show to energize the anti-gun voters: “I think that we have to step up, all of us, and speak up” against the NRA. His NBC colleague Hallie Jackson pressed White House press secretary Sarah Huckabee Sanders “When, for example, Senator Chris Murphy says it’s time for Congress to get off its ass and do something, does the President agree?” And NBC News’ Cal Perry blatantly said what most of his peers were thinking when he admitted: “It has become impossible to report just, ‘facts’ about gun violence. The fact is America needs gun control.”

The elites in the entertainment industry also attacked responsible gun owners. Actor Michael Ian Black called the NRA a “terrorist organization,” singer Lady Gaga tweeted that “blood is on the hands” of President Donald Trump and House Speaker Paul Ryan and late night host Jimmy Kimmel raged against: “lawmakers who won’t do anything about this because the NRA has their balls in a money clip.”

The following is just a sample of the most exploitative efforts, so far, by the liberal press and Hollywood to use the Las Vegas tragedy to advance their attack on Second Amendment rights:

“If they wouldn’t do anything when children were murdered I have no hope that Repugs will ever do the right thing. I’m actually not even sympathetic bc country music fans often are Republican gun toters.”
— CBS Senior Counsel for Strategic Transactions  Hayley Geftman-Gold in a Facebook post. CBS fired her on October 2.

“Massacre of Country Music Fans” is “Blood Sacrifice” to the “Constitution”

“The Constitution is not a pact with the devil, nor is it a suicide pact. It is a formalized, legalistic ritual of blood sacrifice. There are some things that we as a society, alas, must tolerate in order to stay true to our founding beliefs and to remain free. Schoolchildren shot to pieces is one of those things. The massacre of country music fans is another one of those things, the 273rd blood sacrifice to that one provision of the Constitution this year.”
— Esquire columnist Charles Pierce in October 2 column “If Newtown Wasn’t Enough, Why Would Las Vegas Be Enough? Our leaders are afraid to tolerate limits on Second Amendment ‘freedoms.’”

“I would say to this audience, and any audience before which I appear these days, we are where we are because of the power of people who wanted these kinds of guns. And the NRA managed to organize them and get them as a political force in America. So the question is, if you’re not happy with what has happened, your individual obligation as citizen is to organize on the other side. And that’s possible as well. The NRA has a lot of money, obviously. And if you’re running against the NRA, in a lot of the western congressional districts for example, you’re portrayed as a traitor to America. You know, you’re not in favor of having people who have weapons, and that’s after all, how the country started. We’re a long way away from that Second Amendment in which we said that a militia is important to our country....I think that we have to step up, all of us, and speak up.”
— Former NBC Nightly News anchor Tom Brokaw on NBC’s Today show, October 3.

“Been a journo for a while now. It has become impossible to report just, ‘facts’ about gun violence. The fact is America needs gun control.”
— October 2 tweet by the Global Editor for Digital Content at NBC News Cal Perry.

“You talked about how now is not the time to get into a gun control debate or to talk about policy. After the Orlando shooting, the President that day was out on Twitter talking about policy. He was talking about his travel ban. So, when, for example, Senator Chris Murphy says it’s time for Congress to get off its ass and do something, does the President agree?”
— NBC correspondent Hallie Jackson to White House Press Secretary Sarah Huckabee Sanders at October 2 press conference.

“Sarah, many times when these horrible massacres occur, it leads to questions about gun control. Has this particular massacre made the president think anything more about pursuing tighter gun laws such as background checks to prevent the massacres like this from happening again?”
— Reuters correspondent Jeff Mason to Sanders at October 2 press conference.

“Does the President believe that this is a moment that this is a time when this should not be a political discussion, it should be a policy discussion? Does he believe that he could bring something new to the gun debate that has been, you know, uh, I guess a locked-in typical politics for so many years?....Before he was elected President, in some fifteen or sixteen years ago, he did have a different view on guns than he had during the campaign. Does he believe that this is something that he could lead a bipartisan effort on at some point?”
— CNN correspondent Jeff Zeleny to Sanders at October 2 press conference.

MSNBCer Whines: With GOP in Charge “Little Will Change”

“By now it’s a familiar pattern that not even the murders of 20 children at Sandy Hook could break, a devastating shooting, a national gun dialogue, then gridlock, with deep disagreements over tougher policies like federal background checks and mental health regulations....Most Republicans oppose stricter rules on gun sales, rallying around the Second Amendment. With the GOP in control of Congress and the White House, tonight it looks like little will change.”
— NBC correspondent Hallie Jackson on NBC Nightly News, October 2.

When Will the American People “Have Had Enough” Of 2nd Amendment

“Why don’t we act? What is the problem? What was it about first graders losing their lives [at 2012 Newtown] shooting that wasn’t sad enough to result in changes?...When do you believe the American people will have had enough; enough to push back against the edges of the Second Amendment argument enough to say we can live under the Second Amendment but there should be limits?”
— Disgraced former NBC Nightly News anchor Brian Williams to Democratic Senator Richard Blumenthal on MSNBC’s Meet the Press Daily, October 2.

Host Stephanie Ruhle: “Nevada has some of the most relaxed gun laws in the country. This state does not require firearms owners to have licenses. It does not require registration of weapons. It does not limit the number of firearms an individual possesses. People were asking about the 10 guns in the gunman’s room. This state does not prohibit the possession of assault weapon, 50 caliber rifles or large capacity ammunition magazines. Before we go, I want to bring commissioner Bratton back in. When you hear this, these very relaxed gun laws in the state of Nevada. How do the police protect against this?
Commissioner Bill Bratton: “They don’t. In terms of what you just described, is, in some respects, a reflection of insanity, but that's the reality.”
Ruhle: “One more time. The description of insanity.”
Bratton: “Description of insanity in terms of what the police are up against...There is a bill to allow silencers that would muffle the sound of a gunshot to be sold openly. Right now they are very restricted.”
Ruhle: “What is the rationale?...Could even a gun lover, a gun enthusiast, what is the rationale behind need, wanting a silencer if not to muffle or hide what you’re doing?...Protect the ears of the hunters. How about the lives of the innocents?”
— MSNBC Live, October 2.

“This country refuses to be rational about guns, even in defense of our children’s lives.”
— October 2 tweet by MSNBC host Joy Reid.

“When someone with a beard attacks us, we tap phones, we invoke travel bans, we build walls, we take every possible precaution to make sure it doesn’t happen again. But when an American buys a gun and kills other Americans then there’s nothing we can do about that. And Second Amendment, I guess our forefathers wanted us to have AK-47s is the argument I assume....The Senate Majority Leader Mitch McConnell, Speaker of the House Paul Ryan, and a number of other law makers who won’t do anything about this because the NRA has their balls in a money clip also sent their thoughts and their prayers today. Which is good. They should be praying for God to forgive them for letting the gun lobby run this country because it’s so crazy.”
— Host Jimmy Kimmel on ABC’s Jimmy Kimmel Live, October 2.

“Prayers are important but @SpeakerRyan @realDonaldTrump blood is on the hands of those who have power to legislate. #GunControl act quickly.”
— October 2 tweet by singer Lady Gaga.

“The NRA is a terrorist organization. There’s no other way to say it.”
— October 2 tweet by actor Michael Ian Black.

“So sad to hear about Vegas. Perhaps this one is finally enough to convince the #NRA? You are slowly killing us for profit. #nomachineguns”
— October 2 tweet by Top Chef’s Padma Lakshmi.

“We are where we are because of lies and stupidity and greed. People are being slaughtered because of greed. F U I won’t say anything.”
— October 2 tweet by actress Rose McGowan.

“I do want to say something to these nuts who spent most of the day today on television and online attacking those of us who think we need to do something about the fact that 59 innocent people were killed. They say it’s inappropriate to be talking about it because it’s ‘too soon.’ Well, maybe it’s too soon for you because deep down inside, you know – in your heart, you know you bear some responsibility for the fact that almost anyone can get any weapon they want and now you want to cover yourself until the storm of outrage passes so you can go back to your dirty business as usual. It’s not ‘too soon’ for us because we’re Americans and last time I checked, the First Amendment is at least as important as the Second Amendment – so we will talk about it. Shame on you for suggesting we do otherwise.”
— Host Jimmy Kimmel on ABC’s Jimmy Kimmel Live, October 3.

That’s Not How It Works

“Welcome to America, where you’ll wait 6 months for an X-ray but hey, you can buy an AR-15 in 5 minutes flat.”
— October 3 tweet by actress Jessica Chastain.

“I mourn this senseless loss of life. What will it take, #Congress, for you to act? @Everytown @MomsDemand #endgunviolence”
— October 2 tweet by actress Julianne Moore.

“Can we discuss the loss of rights of people going to a concert because of the lack of assault rifle regulations?”
— October 2 tweet by singer Sheryl Crow.

“Call you[r] senators and keep calling. Let them hear your voice. Ask them how many more people would have died IF this guy had a silencer?”
— October 2 tweet by actress Emmy Rossum.