Judd Apatow: Trump is Running the Country Like ‘The Apprentice,’ It’s ‘Scary’ 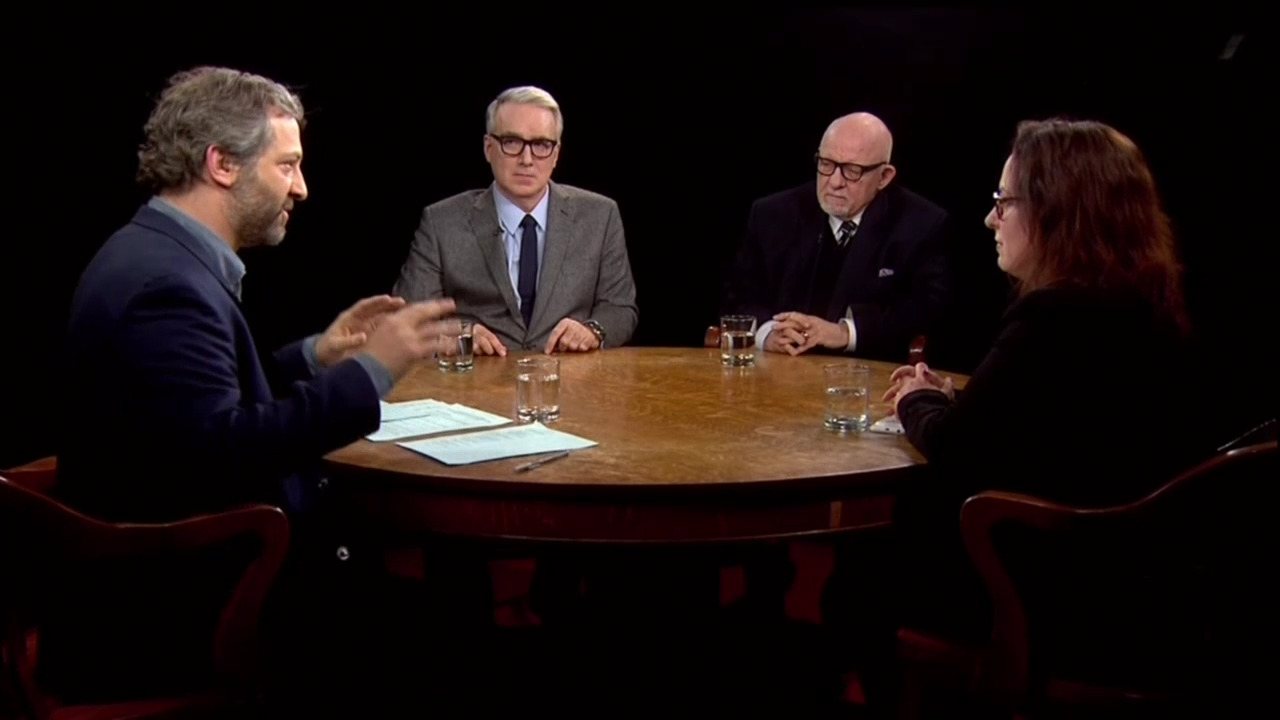 In what was a bit of a shock for what’s considered a sober PBS interview program, comedian and filmmaker Judd Apatow substitute-hosted the Charlie Rose show on Monday night. And the producer of movies like Super Bad, Anchorman, and Bridesmaids wasted little time in insulting Donald Trump as he declared: “I feel like he runs the country like he ran The Apprentice....And it’s a little scary isn’t it?”

Apatow also invited former MSNBC host Keith Olbermann, New York Times political correspondent and GOP strategist Ed Rollins to take a few shots at the President. When Apatow asked his panel if they thought Trump “has sat down and very carefully read the Constitution?” Rollins replied “I doubt it” and Habermann chimed in: “I don’t think it’s likely.”

Apatow then turned to Olbermann to ask what he was “most concerned about” to which the GQ special correspondent/ranter responded: “I don’t believe him sane, flatly.”

The following are the relevant exchanges as they were aired on the February 13 edition of PBS’s Charlie Rose show:

JUDD APATOW: Good evening. I’m Judd Apatow filling in for Charlie Rose. While the country remains divided on the new administration we can all agree president Donald Trump is like no other before him. Many of us lay people, myself include, keep up with the news daily but it’s become increasingly difficult to separate fact from spin and parse out what his policies mean for the country and world at large.

Joining me now to discuss the impact of Donald Trump’s presidency are Maggie Haberman of the New York Times and CNN. GQ special correspondent Keith Olbermann and Republican strategist Ed Rollins. I’m pleased to have them at this table. Welcome. Well, what do we think? What’s happening? What happened in the last four-and-a- half minutes?

MAGGIE HABERMAN, NEW YORK TIMES POLITICAL CORRESPONDENT: I was going to say seconds is the better way to do it. We’ve had, since we entered this studio we have had one advisor to the president go on television and say that his national security advisor is safe and then I’ve heard from sources that, that might not be so. And we haven’t had the President weigh in. And you can take that instance of uncertainty and apply it almost to anything in this presidency. Because you have a divided camp constantly. And that is how Trump manages. And you see this play out and it’s on almost any matter. On staffing choices big and small. On matters of national security. On matters of you know, how they’re gonna lay out their week on policy, It’s very, very hard to keep up with.

...
APATOW: Is there a chance that he has sat down and very carefully read the Constitution?

ED ROLLINS: I doubt it.

APATOW: Keith, what are you most concerned about?

KEITH OLBERMANN: I don’t believe him sane, flatly. And we can, again, analyze what that means but I don’t know that we can, we can expect rational decisions to the 100 crises a day that go through the government.