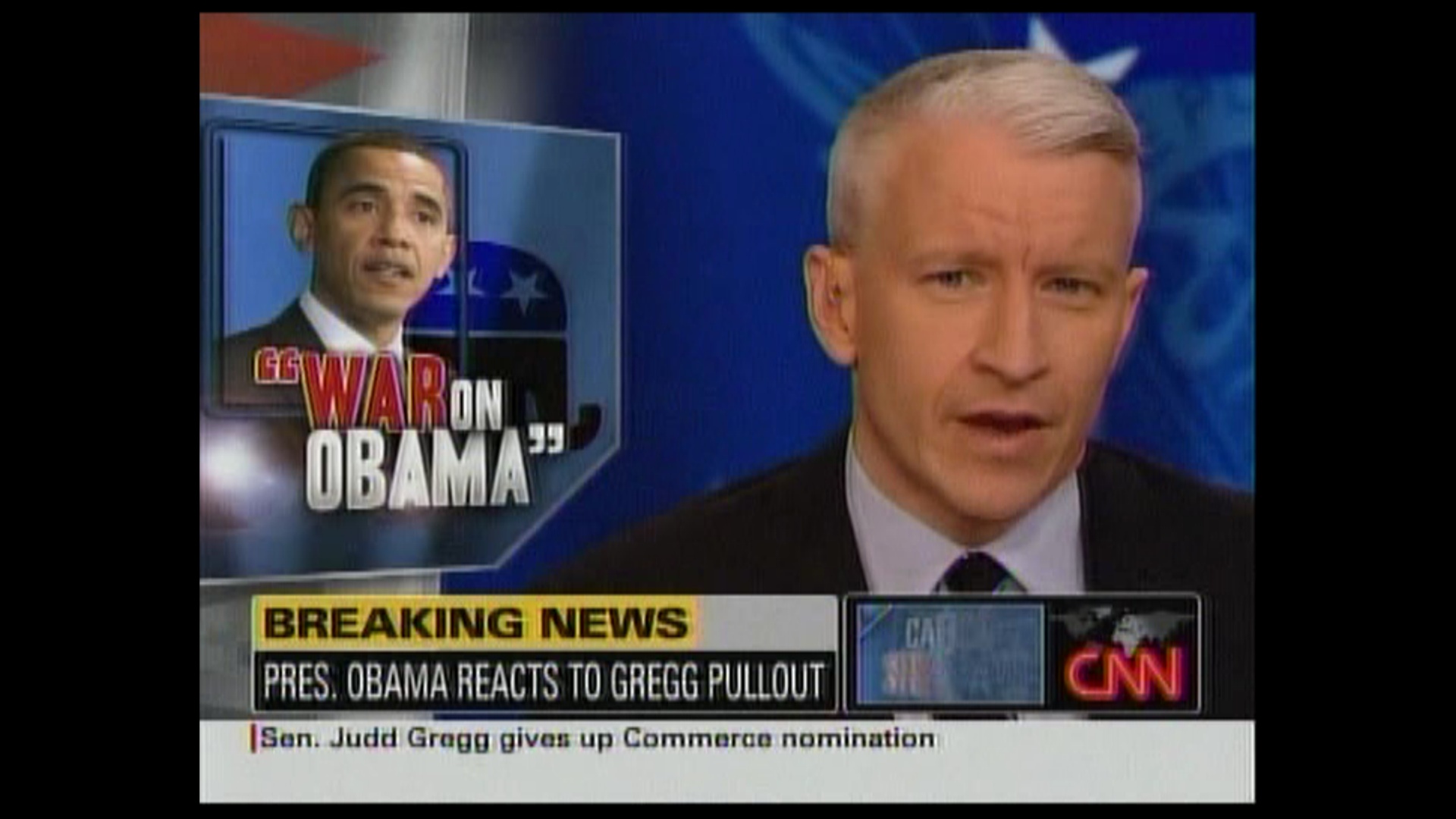 Going into his fourth week, President Donald Trump still doesn’t have all his cabinet appointments in place. But despite the Democrats’ stunts to slow down the process in 2017, the liberal media has not portrayed them as obstructionists. This is a far cry from how they treated Republicans during the first few weeks of Barack Obama’s administration.

In 2009 when cabinet appointees Tom Daschle and Bill Richardson were forced to withdraw due to improprieties, then-NBC Nightly News anchor Brian Williams offered his sympathies to Obama: “You lost two nominees, two appointments today. Did that make you angry, I imagine?...How do you prevent the lesson from being that, no matter how lofty the goals of the new guy coming in, Washington wins, in the end?”

Back then, ABC’s Terry Moran fretted to Obama that “you got no honeymoon,” and wondered if had been “too nice” to Republicans. CBS’s Maggie Rodriguez wondered if “it behooves the Republicans to be a little bit more in the middle?” Over on CNN, Anderson Cooper questioned if there was “a war, an insurgency by Republicans against the President.”

The following is a look back, via the MRC’s archives, at how the media lambasted Republican opposition to Obama during his first few weeks in office:

ABC's Moran: Too Nice Obama “Got No Honeymoon”

“Mr. President, you got no honeymoon. Not a single Republican vote in the House on your first major piece of legislation....I wonder if, coming into the presidency, maybe you were too nice. If I’m a Republican Senator, or a Republican Congress, I think you’re a very nice guy, but maybe I don’t have enough reason to fear you.”
— ABC's Terry Moran in an interview with Obama shown on World News, February 10, 2009.

“Senator DeMint, you can say that the Democrats were uncomfortable as well, but they were all supporting him publicly. So, this does read to the public as though the Republicans went after this man, someone that the President very much wanted, and brought him down.”
— NBC's Andrea Mitchell interviewing Republican Senator Jim DeMint on MSNBC shortly after Tom Daschle withdrew as the nominee for Secretary of Health and Human Services, February 3, 2009.

“The larger question raised by [Senator Judd] Gregg’s about-face, is it a sign that Republicans have no desire for real bipartisanship? Have they, in fact, declared war on President Obama?...Do developments today also speak to something deeper, a war, an insurgency by Republicans against the President, against Democrats in the House and against their agenda?”
—  CNN's Anderson Cooper on Anderson Cooper 360, February 12, 2009 talking about Senator Gregg’s withdrawal as a nominee for Commerce Secretary.

Anchor Katie Couric: “President Obama made an in-person appeal to House Republicans to vote for his economic stimulus plan, but it didn’t work. Not a single Republican joined the majority Democrats tonight as the House passed the more than $800 billion package....”
CBS’s Chip Reid: “Republicans relentlessly attacked the bill despite the President’s extraordinary efforts to get bipartisan support....”
Couric: “Chip, as you mentioned, I mean, the President went up to the Hill to personally appeal to Republicans already, so what more can he do?”
—  CBS Evening News, January 28, 2009.

“If you add up the House and the Senate we have what, 219 Republicans. All but three of them voted against this plan....216 Republicans seem to have placed a bet on failure. Isn’t that safe to say?”
— NBC’s Matt Lauer to former Bush advisor Karl Rove on Today, February 17, 2009.

“Congressman, it’s clear that Americans are begging for help with foreclosures. Corporations are begging for bailouts. Can the Republican Party accept that there are situations when large-scale government intervention is necessary?...But everyone opposed it [Obama’s spending package]. Why? Where’s the bipartisanship? Are you afraid of being seen as obstructionist?”
—  CBS’s Maggie Rodriguez to Republican congressman Eric Cantor on The Early Show, February 16, 2009.

“You campaigned to change the culture in Washington, to change the politics-as-usual culture here. Are you frustrated? Do you think it is much, much harder to do that than you ever anticipated?”
—  CBS’s Katie Couric to Obama in an interview shown on the February 3, 2009 Evening News.

“You lost two nominees, two appointments today. Did that make you angry, I imagine?...How do you prevent the lesson from being that, no matter how lofty the goals of the new guy coming in, Washington wins, in the end?”
— NBC’s Brian Williams in an interview with President Obama shown on the February 3, 2009 Nightly News.

CBS Urged Republicans to Be “More in the Middle...”

“Don’t you think that right now is not —  it behooves the Republicans to be a little bit more in the middle? I mean, what are —  they’re not —  their voices aren’t going to be heard anyway, as we saw with this economic stimulus plan....So doesn’t it behoove them to be more bipartisan and meet in the middle?”
— Co-anchor Maggie Rodriguez to conservative author Ann Coulter on CBS's Early Show, January 29, 2009.