No Honeymoon for Donald? The Worst Attacks on President Trump 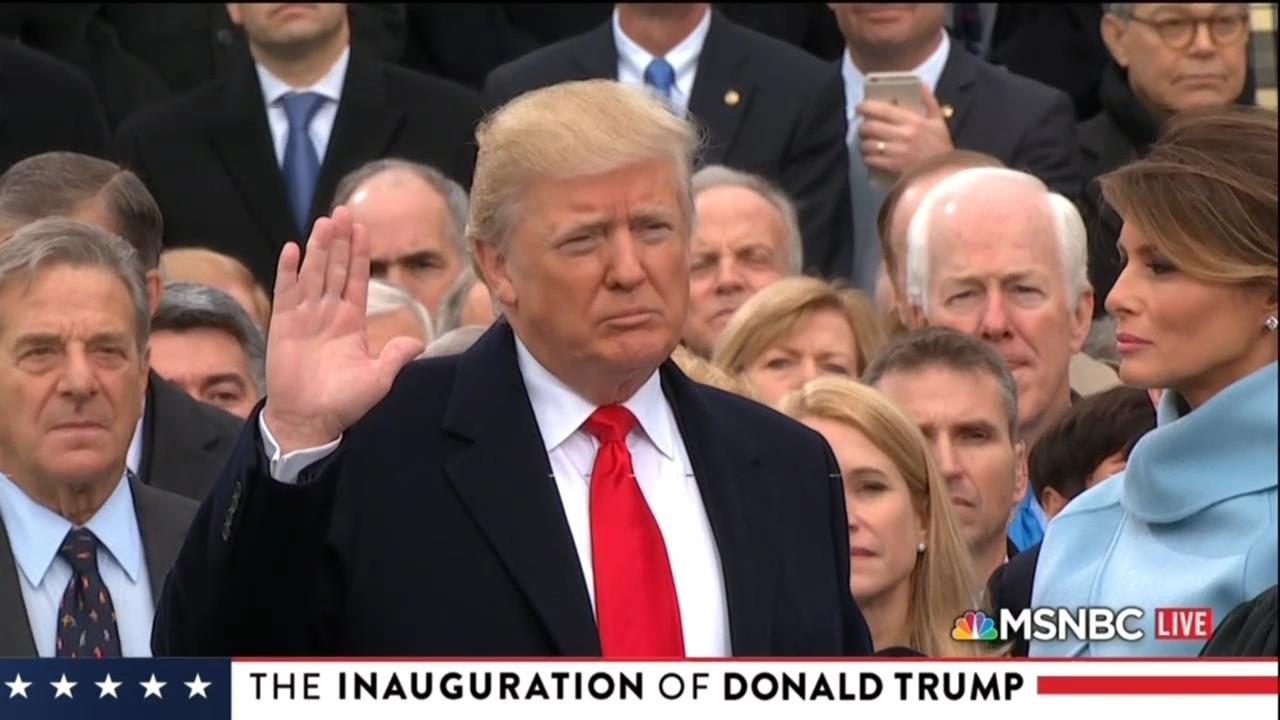 Forget a honeymoon. The liberal media started savaging President Donald Trump even before he was sworn-in. On the day before his Inauguration, MSNBC host Chris Matthews was scared by Trump’s access to nuclear weapons as he screeched: “It’s horrible but it’s real.”

And lefty celebrities offered their not-so-warm welcome to the new president as actress Ashley Judd roared: “I feel Hitler in these streets” and Madonna threatened: “I have thought an awful lot about blowing up the White House.”

The following are the worst attacks on Trump, so far.

Host Chris Matthews: “He [Trump] will be briefed tomorrow morning or tonight on what his potential — how many people to kill with each button. It’s horrible but it’s real.”
Washington Post columnist Catherine Rampell: “Yes. I mean, not to play into the public’s fear, but yes. That is somewhat terrifying to me, given that Trump does not have the greatest impulse control and when he says that he gets attacked, he punches back. What does that mean when he has greater weapons with which to punch? I don’t know. One would hope as Obama has stated, Trump will be sobered by — and awed by the powers of his new office, by the responsibilities he would be imbued with and we just have to hope all effort from the contrary from the last year — ”
Matthews: “Well, I think that’s one thing everyone on the planet can agree with.”
— MSNBC’s Hardball, January 19.

“It was dark, it was fierce. There were very few olive branches thrown to people who are skeptical of him and might be open-minded to support someday Donald Trump as President, or to the other side, people who voted against him and who will never support him.”
— Presidential historian Michael Beschloss during MSNBC’s live coverage of Trump inauguration, January 20.

“I thought it was shockingly divisive for an inaugural....He insulted — at points, insulted almost every living president that was there to witness his inaugural, which, to me, was so stunning.”
—  NBC Meet the Press moderator Chuck Todd on the January 20 Nightly News.

Anchor George Stephanopoulos: “Students of history will take note of that slogan, America first.”
Correspondent Terry Moran: “It’s a loaded term in American history. Now, he defined it here as total allegiance to the United States of America, and it is something, as Cecilia said, this is why he was sent here by people who want to hear that message of America first. However, it carries with it overtones from the 1930s when an anti-Semitic movement saying, ‘We don’t want to get involved in Europe's war. It’s the Jews’ fault in Germany!’ Charles Lindbergh led them. It is a term, as he defined it his way, but the words themselves carry very ugly echos in our history.”
— ABC News live coverage of Trump inauguration, January 20.

“The new President also repeating that our guiding principle will be America first, America first. We know how he has used that as a campaign slogan, that does also have very dark echoes in American history. There was an America First Committee that formed in this country, hundreds of thousands of people in this country, some of the richest businessmen in the country who were part of it, they were formed to keep us out of World War II. They were infiltrated by the Nazis, many of them are anti-Semitic, part of why they weren't alarmed by Hitler’s rise in Germany. The America First Committee is something that means a specific thing in this country, to repurpose it now, not that far down the historical path. It’s hard. It’s hard to hear.”
— Host Rachel Maddow during MSNBC’s live coverage of Trump’s inauguration, January 20.

Host Rachel Maddow: “Interesting portrait of power in the new — in the new White House. Jared Kushner is the son-in-law of the President....A lot of people felt like the anti-nepotism laws would prevent a hire like that but they believe that they're on firm ground. Jared Kushner will be a senior adviser to his father-in-law.”...
Chris Matthews: “It’s hard to — Rachel — it’s hard to fire your son-in-law....but Mussolini had a great solution to that. He had him executed. So, it’s — ”
Maddow: “Jesus, Chris!
Matthews: “So, if I were Jared, I’d be a little careful.”
Maddow: “Well, all the people who are waiting for the reference to Mussolini have just started drinking.”...
Matthews: “But I’m thinking when he said today ‘America first’ it was not just the racial, I mean the, um, I shouldn’t say racial, the Hitlerian background to it.”
— During MSNBC’s live coverage of Trump’s inauguration, January 20.

“What’s helping Barack Obama’s legacy with the press is Donald Trump. By comparison, he’s like St. Augustine up there talking to the — the flock.”
— CNN presidential historian Douglas Brinkley on CNN Tonight, January 18.

“It’s very hard to set the Barack Obama standard. In my mind, he’s like Dwight Eisenhower. He is almost unimpeachable. He has governed with such honesty and integrity, and he’s not only leaving with that 60 percent we keep talking, but a growing reputation. And the legacy of having eight scandal-free years is going to look larger and larger in history because we’re already looking at the bog of what’s going to happen in the first months of Trump’s presidency. I’m not saying Donald Trump may not be a very successful President, but when you rank Presidents on ethical standards, Barack Obama's the highest. He’s up there with some of our really great American leaders.”
— CNN presidential historian Douglas Brinkley on CNN Tonight, January 19.

“Here’s my prediction: America and the world will soon be craving that Obama Cool again....Trump may dismantle ObamaCare and pull out of the Paris climate accord. But he cannot undo Obama’s legacy of dignity and old-fashioned virtue, and the impression he made on all of us. And if, as I fear, we see the White House transformed into a bog of scandals flowing from an unprincipled narcissist, we as a nation will be more appreciative of a first family that set an impeccable example for all the world.”
— New York Times columnist Nicholas Kristof in January 19 article “Missing Barack Obama Already.”

How Rude! He Just Had Tea with Obama

“We kept hearing that it would be a speech about unity and healing, and I kept waiting to hear something about unity and healing, and that never came. I think that’s very surprising. And to say —  the way he slammed everything that has happened in the last eight years, with the President – the former President of the United States, sitting there listening to that after they had just come from tea and coffee together, I think lot of people are very surprised by this tone today.”
— Co-host Gayle King on CBS News live coverage of Trump inauguration, January 20.

Will Dictator Trump “Deny Reality on a Daily Basis?”

“Will President Trump deny reality on a daily basis? Will he make up his own false facts and fake stats? What will the consequences be? Will reporters give up trying to fact check? Is that the goal? To wear us down, to wear us out....Do Trump’s allies want to silence skeptics in the media, destroy the press or maybe support an alternative press that presents an alternative reality that's more favorable?...Do citizens in dictatorships recognize what’s happening right here right now? Are they looking at the first two days of the Trump administration and saying, ‘Oh, that’s what my leader does?’ What should we learn from them today?”
— Host Brian Stelter on CNN’s Reliable Sources, January 22.

“I am a nasty woman. I am not as nasty as a man who looks like he bathes in Cheeto dust, who’s words are a death trap to America, Electoral College-sanctioned hate speech contaminating this National Anthem....I am not as nasty as a swastika painted on a pride flag and I didn’t know devils could be resurrected, but I feel Hitler in these streets. A mustache traded for a toupee. Nazis renamed as the cabinet....I am not as nasty as your own daughter being your favorite sex symbol, like your wet dreams infused with your own genes but, yeah, I’m a nasty woman. A loud, vulgar proud woman. I’m not nasty like the combo of Trump and Pence being served up to me in my voting booth.”
— Actress Ashley Judd at the Women’s March as aired on C-SPAN, January 21.

“Welcome to the revolution of love! To the rebellion, to our refusal as women to accept this new age of tyranny. Where not just women are in danger, but all marginalized people, where being uniquely different right now might truly be considered a crime. It took this horrific moment of darkness to wake us the fuck up. It seems as though we had all slipped into a false sense of comfort, that justice would prevail and that good would win in the end. Well, good did not win this election....Yes, I am angry. Yes, I am outraged. Yes, I have thought an awful lot about blowing up the White House. But I know that this won’t change anything.”
— Singer Madonna at the Women’s March as aired on C-SPAN, January 21.

“We’re marching because this is much bigger than Donald Trump, although I think the election of Donald Trump has given voice to a lot of racism and misogyny and just given a boldness to a certain kind of hatred and violence and humiliation that we have not seen before. I am an immigrant. I came to this country when I was four. I am a woman of color. I am a brown person working in a white culture and living in a white culture. And so I have two reasons to be wary of this administration —  not just of him but of his appointees —  of Congress who has vowed to turn back a lot of the rights and benefits that I hold very dear, like the right to choose.”
— Celebrity chef Padma Lakshmi on CNN’s The Lead with Jake Tapper, January 21.

“Upon Donald Trump’s swearing in tomorrow he will be violating the constitution and most assuredly committing treason. God help us.”
— January 20 tweet by film director Rob Reiner.