Posted below: the September 12 edition of Notable Quotables, MRC’s bi-weekly compilation of the latest outrageous quotes in the liberal media. This issue: NBC News correspondent Andrea Mitchell declared questions about Hillary Clinton’s foreign policy judgement are no longer “on the table," while CNN’s Van Jones concluded “when you look at the fact checkers” Clinton is "one of the most honest politicians in America.”

At the same time, Donald Trump’s slogan “Making America Great Again” is deemed to be racist code language. Also, journalists rush to defend San Francisco 49er quarterback Colin Kaepernick’s protest against the National Anthem and the passing of conservative icon Phyllis Schlafly exposes the ugliness on the left. The complete issue, with 25 quotes, is posted below (or view the printer-friendly PDF version). 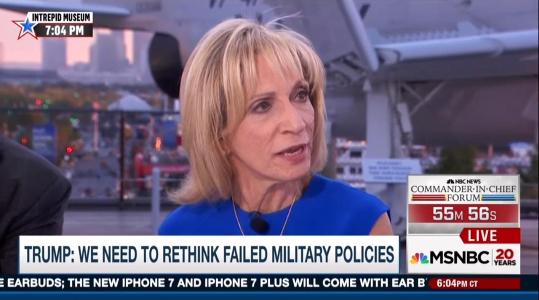 “It’s who do you trust? Who has the temperament? And I don’t think she [Hillary Clinton] has to prove her toughness. She’s answered the 3:00 phone call question....She proved her commander-in-chief bona fides in terms of being tough as a gender issue. That’s no longer on the table.”
— NBC’s Andrea Mitchell on MSNBC’s Hardball, September 7.

“Do you think that you are held to a different standard than he [Donald Trump] is by the media and by voters because it seems like a lot of voters don’t actually care....They know that he has done some shady things and they’re okay with that, but they are concerned about you.”
— Bloomberg reporter Jen Epstein’s questions to Hillary Clinton on her campaign plane, September 5.

“Secretary Clinton, you have been criticized by the RNC for your demeanor last night, that you were too serious, that you didn’t smile enough. Can you react to that? And also you have suggested that there is a double standard. Do you think that you’re treated differently in this race because you’re a woman?”
— Unidentified reporter’s question to Clinton during her tarmac press conference, September 8.

“How was your Labor Day weekend?”...
“Do you have a Labor Day message?”
— Unidentified reporters’ questions to Clinton on campaign plane, as quoted by Real Clear Politics' Ian Schwartz in a September 5 story, “Clinton Takes Questions from Press”

“Are you glad to have all of us with you?...Have you missed us?”
— MSNBC host Andrea Mitchell question to Clinton on campaign plane, September 5.

The Feeling Is Mutual

“I love you Andrea, you’re indefatigable. You’re my kind of woman.”
— Hillary Clinton, before taking a question from MSNBC’s Andrea Mitchell during her tarmac press conference, September 8. 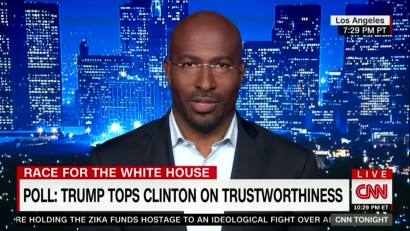 “It actually turns out that Hillary Clinton, when you look at the fact checkers, she’s one of the most honest politicians in America, according to the fact checkers.”
— CNN political commentator Van Jones on CNN Tonight, September 6.

RNC Chairman Reince Priebus: “I will tell you as a lawyer James Comey laid out a prima facie case [on Hillary Clinton’s missing e-mails] for gross negligence, absolutely.”
Host Chuck Todd: “No, I understand the case he laid out, but we don’t know factually. You don’t have the smoking gun.”
— Exchange on NBC’s Meet the Press, August 28.

“The quid here is to very wealthy people, ‘Give us money, so we can give 11.5 million people AIDS drugs.’ And the quo is, ‘Huma Abedin may call you back.’ That is not a quid pro quo, in a sense. And I think we have to ask whether we’ve invented a new standard. The George Bush Foundation, which benefits him, it benefits his library, which can accept foreign donations, existed all through the eight years of his son’s presidency. I don’t recall us asking whether people who might want to influence President George W. Bush could simply give to a foundation that benefitted him. His [Bill Clinton’s] foundations have not financially benefitted the Clinton family at all.”
— MSNBC host Joy Reid on NBC’s Meet the Press, August 28.

Clinton vs. Trump Is “Apple” vs. “Rancid Meat”

Slate editor Jacob Weisberg: “You know, the structure of covering politics is you compare an apple and an orange, and they have different attributes, but they’re both fruits and you can take your pick. In this case we have something more like an apple and some rancid meat. Excuse the expression.”
Host Brian Stelter: “I’m sorry, is Donald Trump the rancid meat?”
Weisberg: “He’s the rancid meat, and in all sorts of ways. I mean, it’s conspiracy thinking, and racism.”
— Exchange on CNN’s Reliable Sources, September 4.

Mika Finally Admits She Can’t Be Objective About Nutty Trump 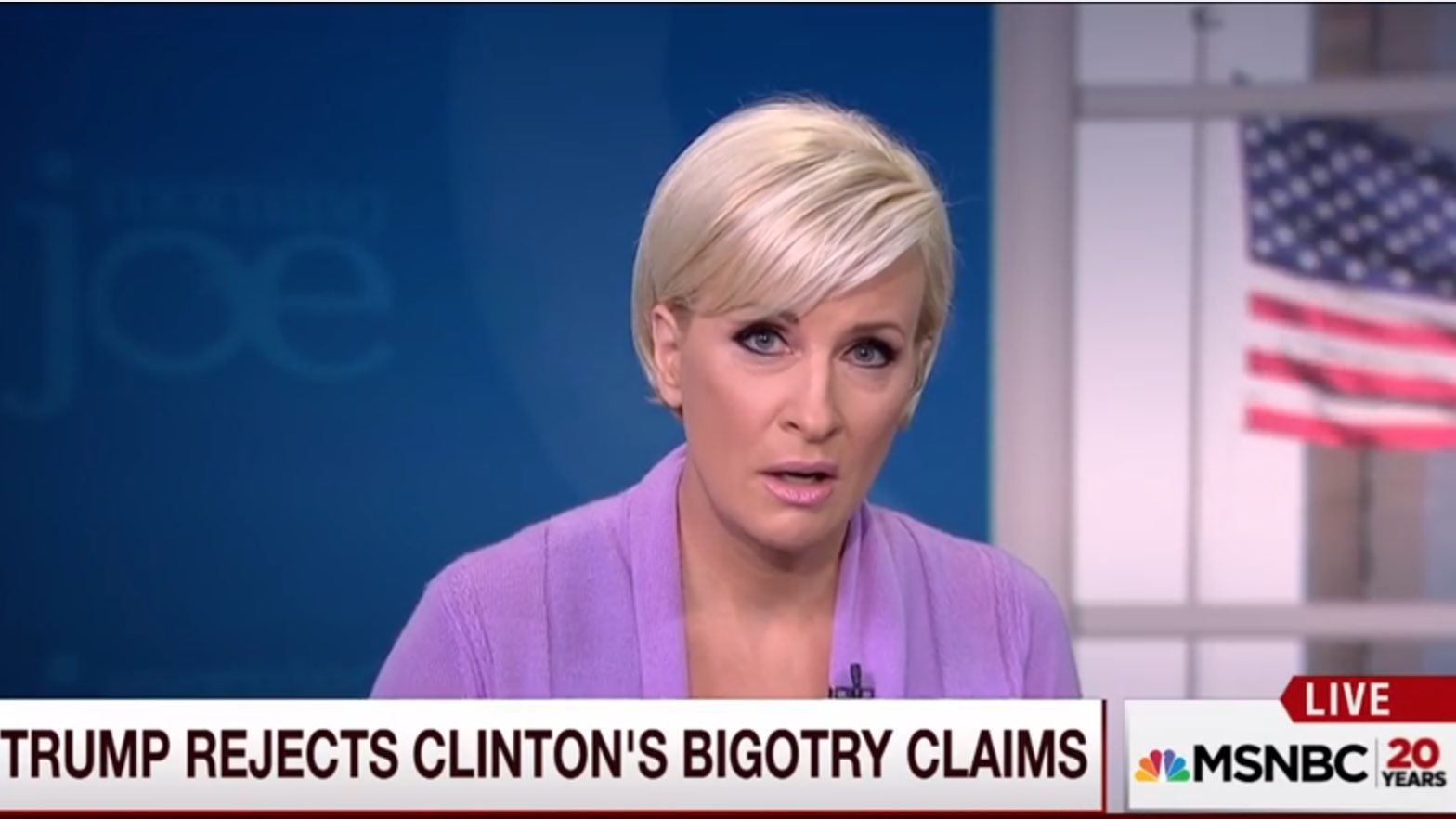 “I actually think it’s time to hear from somebody in the mental health community. To look at this person [Donald Trump] who has been on television for months and to give us a sense of what we have going on here. And, I’m sorry, let’s stop pretending we’re dealing with someone who we can completely understand. And when you see someone who you think has problems, you know it. And there’s not anybody at this table who doesn’t think he has some sort of problem. Let’s ask the questions. Let’s do this at this point. Let’s set up someone and ask questions.”
— Co-host Mika Brzezinski on MSNBC’s Morning Joe, August 29.

Media Too Easy on Trump?

“Donald Trump in 2013, his foundation made an illegal $25,000 contribution to a campaign committee associated with the Florida attorney general who was at that time deciding whether to pursue an investigation into Trump University....This is — should be major story. And I’m perplexed by why it hasn’t gotten more attention.”
— USA Today’s Susan Page on CBS’s Face the Nation, September 4.

“Whiteness has been rendered invisible. It has been the default position of American identity so that whiteness and nation are seen to be indissolubly linked. And, as a result of that, you don’t have to talk about whiteness. All you have to do is talk about making America great again. Black people hear those code words, and they understand what they mean....If he’s not ideological and if he’s only nationalist as has been indicated, again, that doesn’t mean he’s contradicting the principles of white nationalism. That means he’s reinforcing them without being held to account. And I think Donald Trump is a massively effective manipulator.”
— MSNBC political analyst Michael Eric Dyson on All in With Chris Hayes, August 24. 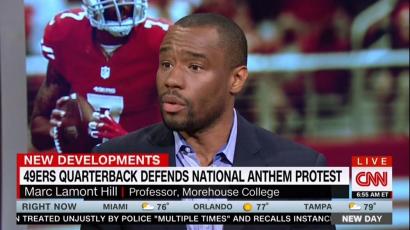 “Oftentimes, when black people resist or critique America, a certain label gets put on that doesn’t get put on other people. When Trump says, ‘I want to make America great again,’ he doesn’t get accused of saying he hates America....You had the Tea Party who’s saying America, fiscally, is going in the wrong direction — no one accuses them of not liking America....His [Colin Kaepernick] particular way of critiquing America is to sit down. That’s his particular form of resistance. And I think that it is a principled one. I think it’s not offending anyone.”
— BET News host Marc Lamont Hill, on August 29 edition of CNN’s New Day, discussing NFL quarterback Colin Kaepernick’s refusal to stand for National Anthem.

“When Kaepernick expressed his awakening by refusing to stand for the national anthem, he and any peers considering similarly expressing themselves learned how society will respond to their citizenship and dissent: by using a playbook of distortion and misdirection as old and predictable as the Packer sweep....White athletes and the predominantly white media....opted for intimidation by pile-on....Real, difficult concepts — like America not living up to the ideals of its flag....are met with hostility and simplistic narratives about patriotism and freedom of speech.”
— ESPN The Magazine’s Howard Bryant in his “The Truth” column for the September 19 NFL Preview issue.

“RIP, Phyllis Schlafly. No woman ever worked so tirelessly, ventured so far on behalf of the belief that other women should do none of that.”
— Politico’s Glenn Thrush in a September 5 tweet.

“Phyllis Schlafly’s dead. She did a lot to make life worse for people I care about. I’m going to the movies now.”
— Vulture writer Mark Harris in a September 5 tweet.

“RIP Phyllis Schlafly, who realized a girl was going to be president and had her large sons throw a toaster in the bath.”
— The Guardian journalist Zack Budryk in a September 5 tweet.

More Patriotic to “Burn the Flag” Than Stand Up for It? 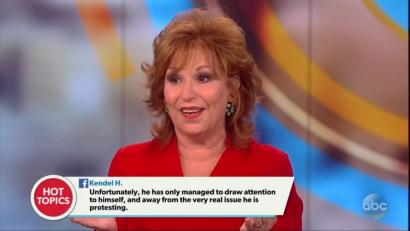 “What he’s [Colin Kaepernick] talking about is a very big problem, racism in America....So this is his way of bringing it to people’s attention and he’s using his constitutional right. It’s ironic isn’t it? That the thing that you have to do is actually burn the flag, don’t stand up, don’t put your hand — Those are the things that make it more American. That’s the beauty of the Constitution. It makes it even more American to do that!”
— Co-host Joy Behar on ABC’s The View, September 6.

“I find Donald Trump incenses me because of — his attitude towards everybody is unacceptable, in my opinion. Any minority. And women included. And I think him talking — white people in general telling black people what’s best for them is atrocious....It’s the way he says, ‘you guys.’ We’re all together here. This is one big, happy world. Sometimes not so happy, but I think, you know, there’s a lot of racism and obviously still in this country and he lights it up. He makes people worse. He gets those people going and that’s the last thing we need.”
— Comedian and Netflix host Chelsea Handler on MSNBC Live, August 26.

It’s the End of the World as We Know It

No Reason to Vote Against Hillary

“Those people [Trump voters] aren’t informed...If you go, ‘Why don’t you like Hillary?’ they’ll go, ‘She lied about her e-mails. What else is she gonna lie about?’ People get one fact and that’s what they latch onto about a candidate...I haven’t had a conversation with anyone who doesn’t like Hillary where they’ve had anything meaningful to say....It’s beyond my comprehension if Trump won. It’s just, it’s too crazy.”
— Actress/comedian Amy Schumer on BBC’s Newsnight, September 6.

Hillary Leading With Actors Who Played Politicians on TV 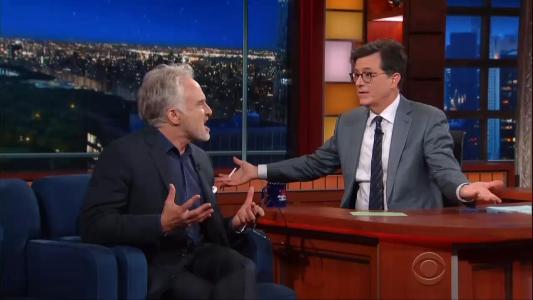 “I’m a huge Hillary fan from way back....Her motivation, as long as I’ve known her, is to get healthcare for people, get healthcare for children. That’s what she spent her life doing. The other guy [Donald Trump] has spent his life accumulating money on bankruptcies....I just have to say this is somebody who says that the President of the United States was not born here. Which is un-American!....It’s un-American and it’s racist!”
— The West Wing actor Bradley Whitford on CBS’s The Late Show with Stephen Colbert, September 8.