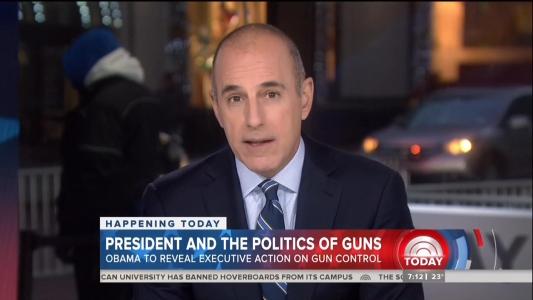 Barack Obama’s announcement of new gun regulations today has already been met with cheers by the anti-gun rights activists in the liberal media. Moments after the White House revealed to reporters on Monday details of President Obama’s executive orders on gun control, the network evening newscasts could barely contain their approval for the President “picking a major fight with Republicans” as his “new gun checks” seek “to restrict gun sales.”

This comes after years of the liberal media lobbying the Obama administration for new onerous restrictions on guns. And just in the past year reporters, anchors, hosts and newspaper editors exploited terror attacks in France and San Bernardino, California and random shootings in Oregon and Virginia to immediately call for curbs on American’s Second Amendment rights.

The following is a compilation of just some of the most obnoxious anti-gun rights moments in the media from the past year:

ABC: Don’t Worry about Terror Because Gun Violence So Much Worse

“The recent terror attacks have created perverse — persuasive fear here in America. But, how serious is this threat, really? And what, if anything, can we do about it? We went looking for answers. They hit us at a holiday work holiday, on the streets in Paris and at a Marine recruiting center. But terror attacks are actually quite rare. Since 9/11, Islamic extremists have killed 45 Americans on U.S. soil. Five a year, on average. Not even close to the 11,000 Americans killed every year by gun violence.”
— ABC’s Dan Harris on Good Morning America, December 6, 2015.

“I don’t often start coverage of an event like this by talking about how other people are covering it, but a commentator for the BBC said overnight, ‘Just another day in the United States — another day of guns, chaos, and panic.’”
— NBC co-host Matt Lauer on the December 3, 2015 Today.

Co-anchor Gayle King: “I thought that headline was very powerful.”...
Co-anchor Charlie Rose: “We have to do something. As the New York Daily News said, God is not going to fix it. We have to fix it.”
— CBS This Morning, December 3, 2015. The San Bernadino shooting was the work of two radicalized Muslims, an American citizen and his Pakistani-born wife.

Dear Prayer People: “Shut Up and Slink Away”

“Dear ‘thoughts and prayers’ people: Please shut up and slink away. You are the problem, and everyone knows it.”
— Washington Post columnist Gene Weingarten in a December 2, 2015 tweet just hours after the shooting occurred.

“We are attacked by foreign terrorists and we go to war and spend trillions of dollars to defend ourselves. But we are terrorized daily by gun violence, and we do nothing? When will we, as a nation, finally decide to take action? What will it take?”
— Ex-CBS Evening News anchor Dan Rather in a December 3, 2015 Facebook post about the California shooting.

“The rest of the world looks at this as the one element of America that they find truly baffling....With gun violence, the United States is essentially alone in the world. There is no other country that has anything remotely approaching the kind of violence we do. The only country that comes even close is Yemen — which is, essentially, a war zone. So, they look at this, and they really can’t understand it; and they don’t understand how we put up with it.”
— CNN host Fareed Zakaria on CNN’s Wolf, December 3, 2015.

No Mass Shootings In Europe?

George Stephanopoulos, host: “It has become the new town square. So many taking to social media to express their sorrow about these mass shootings. Big debates about our gun laws as well. Michael is back and you’ve got that side of the story.”
Michael Strahan, co-host: “Yeah. A lot of people have been expressing what they felt about this mass shooting, George. Gabrielle Giffords, a victim of a mass shooting in 2012 tweeted, “America is an extraordinary place. But these shootings make us stand out in the worst of ways.” And actress and gun control activist Amy Schumer, she weighed in with these tweets: “This is absolutely heartbreaking. All my love to everyone in San Bernardino, especially the first responders. These shootings must stop. It doesn’t have to be this way. Join the movement and help us. #Endgunviolence.” You know, we've seen these memes everywhere. The California bear hugging the state at a time that the state needs it the most. And you feel while this is going on it should be the bald eagle hugging them.”
Robin Roberts, host: “Oh, gosh.”
Stephanopoulos: “You want to reach out to that community.”
Roberts: “I know some people were getting a little put off because you tweet and you say you're in my thoughts. You're in my prayers. And they’re like, what? Action. So many people are saying, we say those things but when is it going to change? When is it actually going to change?”
— Exchange on ABC’s Good Morning America, December 3, 2015.

Clip of Senator Harry Reid: “We extend our sympathy, our best wishes.”
Correspondent Nancy Cordes: “Sympathy and best wishes are about all that the victims’ families can expect from Congress, which has not seriously debated strengthening gun laws since 2013, after 20 children and six adults were killed at Sandy Hook Elementary in Connecticut. But even then, the Senate easily defeated legislation that would have increased punishment for gun trafficking and expanded background checks, something 88 percent of Americans say they support....”
— CBS Evening News story on the Oregon college shooting, October 1, 2015.

Latest Shooting = Another Excuse to Rage Against Gun Rights

“One of our political parties is completely insane and it’s the party that, when we have mine disasters, blocks mine regulations. It’s the party that says, when we want to fix our roads, you can’t have an infrastructure bill, you can’t raise the gas tax....And we have the same party, which has somewhere between 300 and 600 people running for president, none of whom will do anything about the problem of mass shootings in America. So, I mean, I’m politicizing the hell out of this, and I don’t care.”
— Esquire’s Charles Pierce on MSNBC’s The Last Word with Lawrence O’Donnell, October 1, 2015.

“We no longer respect our weapons. We forget that guns can actually kill. If you want the facts to back that up, 100 children were killed in unintentional shootings between December 2012 and 2013 — the year after the Newtown shootings, by the way — and there have been 1,104 accidental shootings so far this year. It’s great Senator Cruz loves guns. Nothing wrong with that. But seriously, while a jury in Colorado decides whether James Holmes gets life or death for killing 12 people, should you fry bacon on your machine gun?...At what point do you cross the line or is there no longer a line to cross?...Can’t he just say he loves guns? Why did he have to fry bacon on his machine gun?”
— CNN Newsroom anchor Carol Costello, August 4, talking about a light-hearted Internet video where Cruz cooks bacon by wrapping it around the barrel of an AR-15 rifle at a shooting range.

Mika: Why Not a Gun Ban Like in Australia?

Mika Brzezinski, co-host: “I don’t think anything can happen now but over time if, sorry, but if a lot of different regulations are put into place. It does start to close in on the problem, including a national database tracking these guns, tracking the amount of guns that are owned by people. I know it sounds completely constraining to the members of the NRA, but are we going to do nothing? Just wait until it comes to your front door?”
...
Joe Scarborough, co-host: “The question is what do we do? And the president is talking about confiscating guns like they did in Australia: well, that’s never going to happen here.”
Brzezinski: “Why?”
Scarborough: “Because we have a Second Amendment, and also you talk about a national registry, I mean, do we really trust the federal government to know where all the guns are, the same federal government that runs the IRS and is capable of doing what they're doing? That’s, I don’t think most Americans would want confiscation or want the federal government to have a national database. If you buy a gun, the feds are going to know what gun you bought?”
Brzezinski: “Yes. Yes, actually.”
— Exchange on MSNBC’s Morning Joe, October 5, 2015.

Major Garrett, correspondent: “It is impossible to sum up all of President Obama’s intellectual and emotional reactions to what he views as an epidemic of mass gun violence on his watch, but we can start with disbelief, compassion, frustration, and evolving anger. After the Aurora, Colorado, movie theater massacre, President Obama played the familiar presidential role of grief counselor....The President also used another word yesterday – numb. He fears the nation has come to accept the unimaginable and somehow found a way to take the shock and sadness in stride. Charlie, for a presidency that began at least in concept around hope and change, President Obama finds little of either here.”
Charlie Rose, co-host: “Thanks, Major. Fantastic report to understand the anger and the depth of the emotion of the President of the United States. And the sense of almost powerlessness to change.”
Gayle King, co-host: “You could really, guys, feel his frustration and a lot of people woke up this morning and asked that exact same question – how much longer? Enough is enough is enough.”
— Exchange on CBS This Morning, October 2, 2015.

“It was almost like, Gloria, he was embarrassed of the United States in front of the whole world saying every other industrialized country, every other Western country, they don’t have these kinds of mass shootings every few weeks as we have here in the United States.”
— CNN’s Wolf Blitzer discussing Barack Obama speech on CNN’s AC360, October 1, 2015.

“In an interview with the BBC today, President Obama said that one of the things that frustrates him the most is the fact that United States of America is the one advanced nation on earth in which we do not seem to have sufficient common sense to have gun safety laws even in the face of these repeated mass killings....You know, I agree. I just don’t understand why we can’t seem to resolve that issue, this issue. And we’re just confronted over and over again with these mass shootings. When will our legislators and our politicians get on board and realize that this is an issue that we have to deal with?”
— CNN legal analyst Sunny Hostin on CNN Tonight, July 23, 2015.