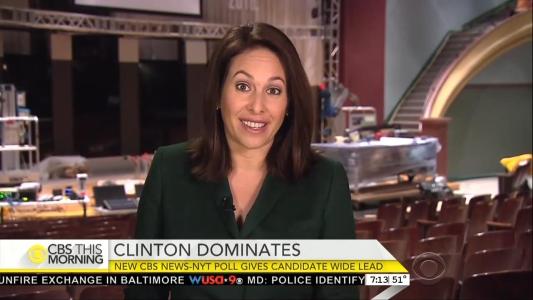 It’s hard to imagine CBS Democratic debate co-moderator Nancy Cordes drilling Hillary Clinton with hardball questions when she’s already dubbed her the “undisputed frontrunner.” Cordes, who will be sharing moderating duties with Face the Nation host John Dickerson, has also knocked the only other female presidential candidate (Carly Fiorina) for having views on womens’ issues that are “identical” to the male Republican candidates.

Cordes even once lamented the loss of disgraced Democratic Congressman Anthony Weiner because he was one of Barack Obama’s “most outspoken critics on the left.”

The following is just a sampling of Cordes’s more liberal takes from the MRC archives:

“Our new poll also finds that Clinton supporters are more likely to say that they have made up their minds. So she is going to walk onto this debate stage on Saturday night as the undisputed front-runner. Her Republican opponents meanwhile are locked in a serious debate over immigration after tangling on that issue at their debate on Tuesday night....When they weren't debating immigration Tuesday, Republicans were talking about Hillary Clinton....In an online video, her campaign mocked them for mentioning her more than the middle class at a debate focused on the economy.”
— CBS correspondent Nancy Cordes on This Morning, November 12.

Carly Fiorina Is Just as Neanderthal as the Men

“Fiorina says if she’s the nominee, Hillary Clinton won’t be able to play what she calls the gender card, but on so many so-called women’s issues, Scott, from Planned Parenthood to paid maternity leave, Fiorina’s views are identical to the men she shared the stage with last night.”
— CBS correspondent Nancy Cordes on the September 17 CBS Evening News.

How is Next House Speaker Going to Deal with “Knucklehead” Conservatives?

“Mr. Speaker, you made no secret of your frustration with some members of your far right flank and some outside groups. You’ve used words like ‘knucklehead,’ and some other words we probably can’t use on television. Had you just had enough, and how will anything be different for the next Speaker?”
— CBS News congressional correspondent Nancy Cordes to Boehner at his live press conference, September 25.

Preparing to Blame Conservatives for Any Lack of Progress

“Mr. Speaker, you have a new crop of conservatives coming into the House who have suggested, among other things, that women need to submit to the authority of their husbands, that Hillary Clinton is the anti-Christ, and that the families of Sandy Hook victims should just get over it. So the ‘hell no caucus,’ as you’ve put it, is getting bigger and some of them don’t think you’re conservative enough.”
— CBS correspondent Nancy Cordes to House Speaker John Boehner at a November 6, 2014 press conference.

Fretting Obama Will Lose a Vital Critic from the Left

Anchor Scott Pelley: "Help us understand why Congressman Weiner matters."
Correspondent Nancy Cordes: "Well, Scott, he holds kind of a unique position in the Democratic caucus. You know, the President has a lot of critics on the right but Weiner is one of his most outspoken critics on the left wherever liberals feel that the President is straying too far from their principles in the pursuit of compromise. It's unclear how well he's really going to be able to perform that role now, a role that even the President has said is very important."
— CBS Evening News, June 6, 2011.