Now online: the November 9 edition of Notable Quotables, MRC’s bi-weekly compilation of the latest outrageous quotes in the liberal media. This week, after CNBC's moderators assault the GOP candidates with a barrage of offensive attack questions, liberal reporters decry Republican complaints about the debacle: "This got a little revolting tonight," MSNBC's Chris Matthews sneered, while ABC daytime host Whoopi Goldberg advised the candidates: "Grow some nuts."

And: CBS and PBS host Charlie Rose tells socialist candidate Bernie Sanders that none of his plans are "radical," while foul-mouthed Kathy Griffin unleashes on Donald Trump, Ben Carson and Marco Rubio. Highlights are posted below; the entire issue is posted online with 21 quotes at www.MRC.org. 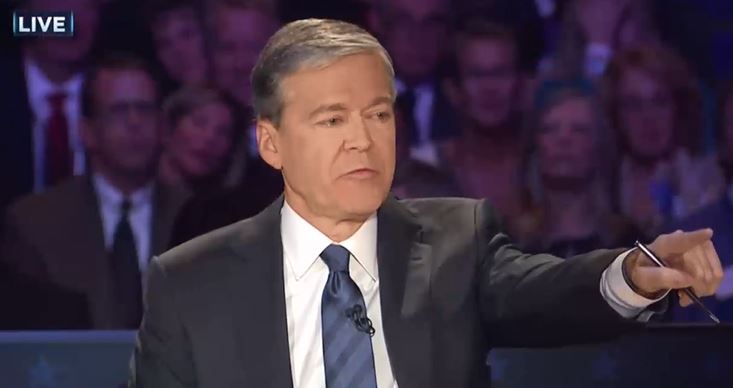 “Mr. Trump, you’ve done very well in this campaign so far by promising to build a wall and make another country pay for it; send 11 million people out of the country; cut taxes $10 trillion without increasing the deficit; and make Americans better off because your greatness would replace the stupidity and incompetence of others. Let’s be honest. Is this a comic book version of a presidential campaign?”
— CNBC’s chief Washington correspondent John Harwood question to Donald Trump at the CNBC Republican debate, October 28.

“You’re skipping more votes than any senator to run for president. Why not slow down, get a few more things done first, or least finish what you start?....So when the Sun-Sentinel says Rubio should resign, not rip us off, when they say Floridians sent you to Washington to do a job, when they say you act like you hate your job, do you?”
— CNBC Squawk on the Street co-host Carl Quintanilla’s questions to GOP Senator Marco Rubio, same night.

“Ben Bernanke, who was appointed Fed chairman by your brother, recently wrote a book in which he said he no longer considers himself a Republican, because the Republican Party has given in to know-nothingism. Is that why you’re having a difficult time in this race?”
— Harwood question to former Florida Republican Governor Jeb Bush.

“Anybody who was following the market knows that your stock [Hewlett-Packard] was a much worse performer, if you looked at your competitors, if you looked at the overall market. I just wonder, in terms of all of that — you know, we look back, your board fired you. I just wondered why you think we should hire you now?”
— CNBC Squawk Box co-host Becky Quick question to Carly Fiorina.

“Senator Rubio, you yourself have said that you’ve had issues. You have a lack of bookkeeping skills....It raises the question whether you have the maturity and wisdom to lead this $17 trillion economy. What do you say?”
— Quick’s question to Rubio.

Even a Liberal Recognizes CNBC’s Awfulness

“CNBC was really reprehensible. But we got a real look at the Republican Party for the first time and their anti-government message is really picking up steam. And the Democrats [have] got to pay attention to it and they’re right about the mainstream media. We in the mainstream media need to be reading the right-wing press more, looking online more. I look at it, because it’s a very different universe than we talk about. And there’s a lot of people out there that adhere to it.”
— Former Washington Post reporter Carl Bernstein on CNN Tonight, October 29. 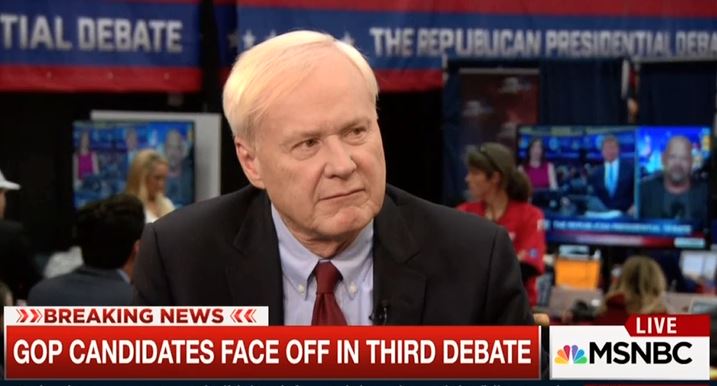 “This got a little revolting tonight, because I thought that the candidates were trying to get votes, and they were using that initiative to take it out on the moderators.”
— MSNBC’s Chris Matthews on a post-debate edition of Hardball, October 28.

“Look, in many ways this was a premeditated attack. There had been some leaked ideas that, you know, beforehand, they were going to go after the moderators and say, ‘Hey, the Democrats didn’t get questions like this,’ and they determined this before the debate even started.”
— Meet the Press host Chuck Todd on NBC’s Today, October 29.

“So grow some nuts. If you’re going to be the president, you’re going to have to answer these questions at some point. I don’t understand.”
— Whoopi Goldberg on Republicans complaining about CNBC debate moderators on ABC’s The View, October 29.

“Fascistic” GOP Debate Letter Appears “to Have Been Drafted by Stalin”

“It’s hilarious because, first of all, if you look at their [the GOP presidential campaigns] demands in this letter, which they’re not even all agreeing to, they seem to have been drafted by Stalin. You know, it’s so tedious, it’s so fascistic really....They seem like scared little children.”
— New York magazine’s Frank Rich on MSNBC’s The Rachel Maddow Show, November 2.

I Keep Telling You Bernie, Your Ideas Are “Not Radical”

Host Charlie Rose: “I’m the first person trying to argue you away from the idea that you’re a socialist....I’m just trying to argue that a lot of people believe what you do about those kinds of issues. They believe there are too many people in jail. There are too many people coming out and not having a place to go and they’re back in jail....There are a whole lot of people who believe the first step towards income equality or to eliminate income inequality is a $15 an hour minimum-wage and that’s been enacted in certain cities already. I’m just saying, these are not radical ideas.”
Democratic presidential candidate Bernie Sanders: “Right. That’s right! They’re not radical ideas.”
— Exchange on PBS’s Charlie Rose, October 26.

Alfonso Aguilar, Latino Partnership for Conservative Principles: “If there’s somebody who is a hard worker when he goes to Washington, it’s Paul Ryan. Not only works with the Republicans but Democrats.”...
Host Melissa Harris-Perry: “I want us to be super careful when we use the language ‘hard worker,’ because I actually keep an image of folks working in cotton fields on my office wall, because it is a reminder about what hard work looks like. So, I feel you that he’s a hard worker. I do, but in the context of relative privilege, and I just want to point out that when you talk about work-life balance and being a hard worker, the moms who don’t have health care who are working....We don’t call them hard workers. We call them failures. We call them people who are sucking off the system....No, no. Really, ya’ll do. That is really what you guys do as a party.”
— Exchange on MSNBC’s Melissa Harris-Perry, October 24.

“So, I’ve met The Donald [Trump] several times. He is such a tool. It’s ridiculous....He can’t be President of the United States. And Dr. Ben Carson, I wouldn’t let that guy give me a pap smear. I mean, I’m sorry....I mean, something is just in the water. And Marco Rubio is, like secretly scary.”
— Comedian/actress Kathy Griffin on PBS’s Tavis Smiley, November 4.