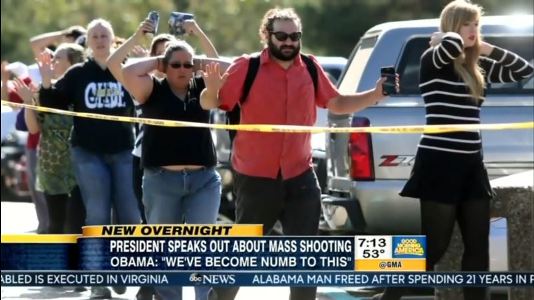 Like prior high profile mass shootings (Aurora, Newtown, Columbine) the liberal media wasted no time in exploiting the latest tragedy in Oregon to call for more gun control.

On Thursday, CBS Evening News anchor Scott Pelley hyped that “each mass shooting brings new calls for tougher gun laws” before correspondent Nancy Cordes declared that “sympathy and best wishes are all about the victims’ families can expect from Congress” because it “has not seriously debated strengthening gun laws since 2013.”

NBC’s Matt Lauer, on Friday’s Today, touted the President’s “emotional” response: “An emotional President Obama spoke about the shootings. He challenged reporters to go back and tally up the number of Americans who died in terrorist attacks in the last decade versus the number of Americans who have been killed by gun violence.” Later in the show, his colleague and Meet the Press host Chuck Todd lobbied the President to take up the gun control cause: “It’s not just us in the media. He probably has to go grab this and campaign around the country as if he wants to refocus Washington on this issue.”

CNN’s Chris Cuomo, on Friday, repeatedly lectured an Oregon sheriff, demanding John Hanlin rethink his support for the Second Amendment in the wake of the community college shooting. Citing the White House, the New Day anchor grilled, “What do you think of what President Obama just said that we are fooling ourselves and we’re not caring about each other if we continue to ignore the role of guns in these crimes?”

Fox News personality Geraldo Rivera went on a Facebook rant within hours of the mass shooting in Oregon. America is a “gun sick nation,” and Second Amendment “BS” aside, he wrote, “the gun lobby controls the country, and allows armed maniacal lunatics to roam free and kill.” By Friday morning, Rivera was egging on President Obama to get tougher on the National Rifle Association: “You blame the gun lobby? Why not take them on? Confront the NRA and call out every hack who ever took money from them.”

The demands from lefty journalists for more gun control policies (that do more to restrict law-abiding gun owners than hamper criminals) in the wake of the Oregon shooting follows a familiar pattern in the liberal media.

The following are just a few examples, from the MRC’s archive, of liberal journalists exploiting past high profile shootings to push for more gun control: 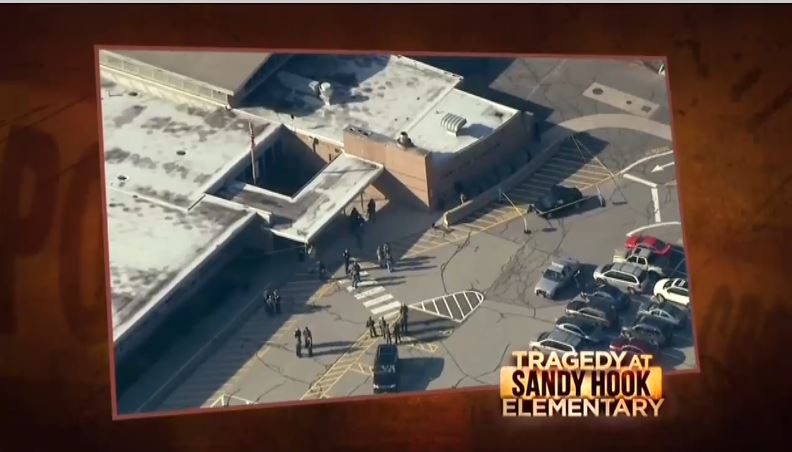 Reporters wasted no time in laying the groundwork for a gun control push, as on the very evening of the Newtown, Connecticut shooting at Sandy Hook Elementary School NBC’s Tom Costello, in a December 14 , 2012 NBC Nightly News report, hyped: “In Colorado, still haunted by the Aurora and Columbine massacres, the governor of that western pro-gun state also said, it’s time to begin a discussion about sensible gun control....Tonight, with dozens dead, including so many children, the debate over guns is back.”

On the December 14, 2012 CBS Evening News, anchor Scott Pelley questioned: “One wonders if the nature of this crime and the age of the victims might create the debate in Washington that could push legislation along?” His CBS colleague Bill Plante, on the December 17 This Morning pushed: “But today, the question, obviously, is posed very starkly: does this tragedy, with the deaths of 20 children, spur some action?”

Within hours of the horrible massacre at the Aurora, Colorado movie theater, liberal reporters hijacked the tragedy to advance their anti-gun rights agenda. On the very day of the Aurora shooting Time’s Michael Grunwald justified the oncoming push for gun control by the media when he pronounced: “There is nothing wrong with politicizing tragedy....Gun control and the Second Amendment are issues, too, and now seems like a pretty good time to talk about them.”

Brooke Baldwin championed the call for more gun legislation, on the July 20, 2012 edition of CNN’s Newsroom, when she hassled Democratic Philadelphia Mayor Michael Nutter: “Why hasn't your party, the Democratic party done more to legislate guns?” and whined that neither Barack Obama or Mitt Romney “mentioned gun control in their statements,” and added: “And my question to you is what has to happen for Washington to reinstate the assault weapons ban which expired back in 2004?”

Later that evening Baldwin’s CNN colleague Piers Morgan, on his self-titled show Piers Morgan Tonight, railed: “I fully respect the Second Amendment and every American’s desire to defend themselves in their homes. But I simply don’t believe the Framers of the Constitution would have ever envisioned a disturbed young man utilizing his right to bear arms by legally buying four guns including an assault weapon capable of firing hundreds of rounds a minute, specifically to murder fellow Americans. There are now almost as many guns in America as there are people, and this can only surely lead to more senseless deaths. Something has to be done, and that debate will start tonight.”

On April 21, 1999, just a day after the Columbine High School killings in Littleton, Colorado ABC’s Charlie Gibson asked then Colorado Governor Bill Owens: “There is irony in this state. Right as this happens, the state legislature is debating a bill that would permit citizens of Colorado to carry concealed weapons. That’s a bill that you support or have supported and said you would sign. Does this change your mind? Does it change the political landscape? Does it now seem terribly ill-advised?”

Over on NBC, Today co-host Matt Lauer lamented that a golden opportunity to regulate guns was being wasted when he asked liberal Congresswoman Carolyn McCarthy (D-N.Y.): “There is some fear among some people that now that school is out, and parents aren’t sending their children off into what they may view as harm’s way every day, that there’s gonna be some momentum lost on gun control. Do you agree with that?”

Lauer’s colleague Ann Curry also wondered where the media-generated momentum went in an interview with the Heritage Foundation’s Marshall Wittman: "But didn’t the public cry out for more gun control after the shootings, the tragedy, the massacre in Littleton, and what happened to the momentum that was building when this was before the Senate?"

In 2000 an MRC study found that in 653 gun policy stories aired on ABC, CBS, NBC and CNN those advocating more gun control outnumbered stories opposing gun control by 357 to 36, or a ratio of almost 10 to 1.