Lerner Rages Against 'Evil and Dishonest' Republicans, Will Nets Report? 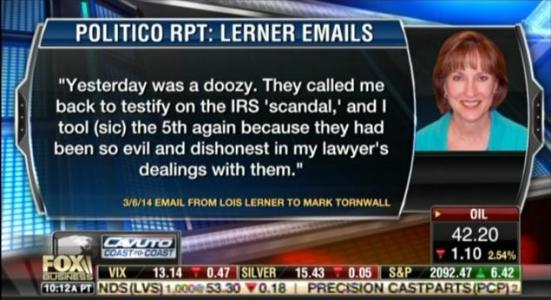 Lois Lerner’s utter contempt for Republicans was on full display in a newly uncovered email in which she railed: “They called me back to testify on the IRS ‘scandal,’ and I too[k] the 5th again because they had been so evil and dishonest in my lawyer’s dealings with them.”

The question has to be asked, will Lerner’s use of such inflammatory language be enough to wake the Big Three (ABC, CBS, NBC) network evening and morning shows out of their IRS scandal coverage slumber?

So far, they have yet to report on any of the recent IRS scandal revelations such as Lerner setting her sights on Bristol Palin, her glee when she found out instant messaging emails were not automatically archived, and the IRS’s targeting of donors to conservative organizations.

On Thursday, Politico’s Katy O’Donnell, in article headlined “Lerner Slammed ‘evil and dishonest’ GOP Inquisitors,” reported on a “Politico examination of thousands of pages of emails and other material recently released by the Senate Finance Committee” that uncovered  particularly spiteful emails Lerner had sent to a friend:

When she was under investigation by Congress, she offered a blistering critique of her inquisitors. In a March 6, 2014, email, Lerner told a friend: “They called me back to testify on the IRS ‘scandal,’ and I too[k] the 5th again because they had been so evil and dishonest in my lawyer’s dealings with them.”

In June 2014, Lerner told the same friend that an unflattering picture of her appearing before Congress kept surfacing because “it serves their purposes of hate mongering to continue to use those images. I was never a political person — this whole fiasco has only made me lose all respect [for] politics and politicians. I am merely a pawn in their game to take over the Senate.”

These emails come on the heels of new evidence that Lerner’s IRS was holding up approval of conservative groups.

Lois Lerner’s political beliefs led to tea party and conservative groups receiving disparate and unfair treatment when applying for non-profit status, according to a detailed report compiled by the Senate Finance Committee.

Because of Lerner’s bias, only one conservative political advocacy organization was granted tax exempt status over a period of more than three years:

“Due to the circuitous process implemented by Lerner, only one conservative political advocacy organization was granted tax-exempt status between February 2009 and May 2012. Lerner’s bias against these applicants unquestionably led to these delays, and is particularly evident when compared to the IRS’s treatment of other applications, discussed immediately below.”

As the report notes, Lois Lerner became aware in April or May of 2010 that the IRS Exempt Organizations (EO) division had begun receiving a high number of applications from Tea Party organizations. But as the backlog of applicants increased, Lerner added “more layers of review and raised hurdles for applicants to clear.”