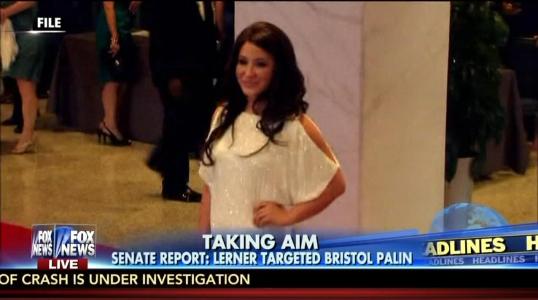 Bristol Palin was once in Lois Lerner’s sights, according to a newly released Senate report on the IRS executive’s e-mails. The daughter of liberal media hate object Sarah Palin got on Lerner's radar due to her work with Candie’s Foundation - a group that works to reduce teen pregnancy.

In a newly released e-mail Lerner wrote: “Thoughts on the Bristol Palin issue? I’m asking because I don’t know whether to send to Exam as a referral.”

So far Lerner’s interest in the former Dancing with the Stars contestant has yet to be mentioned on the usually celebrity-obsessed Big Three (ABC, CBS, NBC) morning and evening shows.

Gregory Korte wrote up the findings in the August 6 USA Today:

Lois Lerner, the key figure in the controversy over the Internal Revenue Service’s targeting of conservative groups for added scrutiny, once considered opening up an audit into Bristol Palin’s compensation from a teen pregnancy charity, according to a new Senate report.

The Senate Finance Committee released the results of its two-year investigation into the Internal Revenue Service’s targeting of conservative groups Wednesday, with revealing looks at Lerner’s emails.

One email, cited by Chairman Orrin Hatch as an “example of Lerner’s interest in conservative organizations,” asked whether the IRS should open an audit of Candie’s Foundation, which paid Palin $332,500 in compensation to be a celebrity spokesperson.  Lerner was concerned that the salary figure could violate IRS rules against charitable groups being for the private benefit of individuals.

Palin is the daughter of 2008 GOP vice presidential nominee Sarah Palin, and she became a household name when it was revealed during that campaign that she had become pregnant at age 17. She later performed on ABC’s Dancing with the Stars and was briefly engaged to Medal of Honor recipient Dakota Meyer.

“Thoughts on the Bristol Palin issue?” Lerner, then the director of the IRS’s Exempt Organizations unit, wrote to her staff in 2011. “I’m asking because I don’t know whether to send to Exam as a referral.” There’s no evidence from the Senate report that an audit was ever opened.