On FNC: Restaurant Owner Proudly Stands Up for the 2nd Amendment Rights of Her Customers

At a time when some businesses like Starbucks, Chipotle and most recently Target have discouraged responsible citizens from bringing guns into their stores FNC's The Real Story with Gretchen Carlson, on Thursday, showcased one Colorado restaurant owner who unashamedly lets her patrons exercise their Second Amendment rights.

When substitute host Shannon Bream asked Lauren Boebert if there had been any "pushback" to her restaurant's open-carry policy, the co-owner of Shooters Grill responded that they've enjoyed "broad support." Boebert then expressed gratitude to her customers, the Second Amendment, and her religion. Apparently not worried about being called a “bitter clinger” Boebert proclaimed: (video after the jump)

We’ve actually met a lot of people from all over country that want to patronize this restaurant because of what we stand for. We stand for our Second Amendment rights. We stand in faith of our Lord Jesus. And it’s just amazing to people that have come in. And you know that’s what we’re here for. We’re not here to worship guns, we worship Jesus. And we love people, we love to serve them and that’s what it’s all about.

The following is a full transcript of the segment as it was aired on the July 3 edition of FNC’s The Real Story With Gretchen Carlson:

SHANNON BREAM: Well a family run restaurant in Rifle, Colorado with a real twist and the name kind of gives it away. It’s called Shooter’s Grill. And everyone from the waitresses to the patrons is allowed, even encouraged to carry guns and exercise their Second Amendment rights. Lauren Boebert is one of the owners. She joins us live now via Skype. Alright, Lauren, how in the world did you come up with this idea? 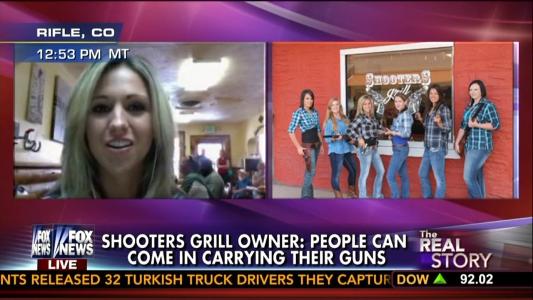 So I began to open-carry, and then eventually my waitresses started approaching me and asking if they could open carry as well. And we went along with that and now we have training for them. So they can go through a concealed weapons training class before they are allowed to open-carry in the restaurant. Even it’s not a state-law I still prefer that there’s no room for ignorance when carrying a firearm.

BREAM: Absolutely. And being trained and knowing exactly how to clean and it use it something my dad made sure I knew as a young woman as well. But I gotta ask you, when people come in, and maybe they’re new to the area or are just dropping in for a bite do they sometimes think it’s a costume or it’s not a real gun?

BOEBERT: Yes, we’ve gotten that a few times. A lot of people have asked, you know, “are those real? Are those fake? Those are part of the costume right?” And no, they are real. They are loaded. We don’t mess around. It’s the real deal. And like I said we’re not ignorant with them. We know what we’re doing.

BREAM: Well do you ever get pushback? Is there anybody in town or in the the surrounding area who sort of question this idea or do you pretty much have broad support?

BOEBERT: I think in Rifle we have broad support. It never was a big deal. We’ve been open more than a year now and just Friday is when this all arised, and America just stopped in for a visit. So we’ve actually met a lot of people from all over country that want to patronize this restaurant because of what we stand for. We stand for our Second Amendment rights. We stand in faith of our Lord Jesus. And it’s just amazing to people that have come in. And you know that’s what we’re here for. We’re not here to worship guns, we worship Jesus. And we love people, we love to serve them and that’s what it’s all about.

BREAM: Well certainly what you’re doing, even though some may think it’s controversial, it is entirely legal.

BREAM: And with the success of your restaurant there, let me ask you any plans to franchise out? 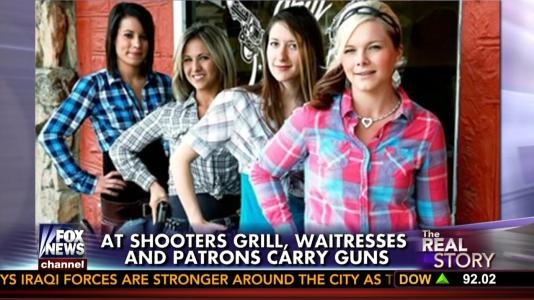 BOEBERT: You know, it’s definitely crossed my mind in the past week or so. I would like to get a couple more restaurants under my belt before we start franchising out, but it’s definitely a thought in my mind.

BREAM: Well, it’s certainly unique. It looks like you guys are handling it in the best way possible.

BREAM: Training and responsibility and you know it sparks a lot of interesting conversations hopefully with the folks who come visit you there as well.

BOEBERT: Absolutely. And also to people who come and visit they are allowed to take that same concealed-carry class. Legal Heat actually puts that on for us. And they offer it to our staff for free and then its $75 for anybody else to come in and they get a meal.

BREAM: That sounds like a good deal to me.

BOEBERT: Thank you, God bless you.