Matthews Teases His Documentary About Scary and Violent Tea Party

If Chris Matthews' preview, on Tuesday's Hardball, of his heavily promoted MSNBC documentary Rise of the New Right, is an indicator of what his special will be like expect a lot of rehashing of Matthews' various attacks on the Tea Party over the past year as he links them and Rush Limbaugh with the birther movement and ominously warns of their potential for violence. Matthews told his viewers that his special "will stun you" and that the "voices you'll hear" and "the guns you see" will explain why "you're seeing men at political rallies for the first time ever, wearing guns." [audio available here]

In a segment that featured conservative Pat Buchanan and leftist David Corn of Mother Jones, Matthews named Limbaugh as a member of the "new right" that is "justifying violence."

CHRIS MATTHEWS: Pat these people are saying things about the country that just aren't true. The President is not legitimate. That the, that the federal government is a tyranny. They are justifying violence.

PAT BUCHANAN: Well look that's, I think that's preposterous. Look now, I'm sure you can go out there, you've got a country of 300 million and find people-

BUCHANAN: Alright but you're taking, you take Joe McCarthy in 1954, four years into his crusade, 50 percent of the American people thought he was doing a good job. Twenty percent, what I'm saying is, take a look...

MATTHEWS: That's the point. I'm not denying the popularity of these people. That's why we did the documentary. To say how scary it is.

The following exchanges and final commentary from Matthews were aired on the June 15 edition of Hardball:

CHRIS MATTHEWS: Pat you're one of the stars of this not because you're a current hero but because you were a pathfinder. What I find stunning about this, and I think liberals, progressives, people from the center left will be stunned and scared by what they see tomorrow night. People on the right may find themselves yelling "right on, right on!" because a lot of this documentary is people on the right saying their thing from Glenn Beck to Rush Limbaugh to Orly Taitz to all these people out there, Alex Jones, saying their thing. It's a true documentary, as you know. What is it today that scares people about Washington government to the point where some are arming themselves? They're calling it illegitimate. This government was elected legitimately. They're calling it a tyranny. It's not right/left anymore. It sounds revolutionary these people. All of them. Tea Party, militia, patriot groups, truths, birthers, the whole crowd.

PAT BUCHANAN: Well, I think you're mixing an awful lot of things.

MATTHEWS: Well there's because they use the same language.

BUCHANAN: But look, look I don't know the Michigan militia guys. I don't go out with them into the woods and things like that. And I don't know if these guys with guns and things like that, really represent our Tea Party. What you gotta ask, Chris, is how is it that a Tea Party that you described in a one-hour documentary as very dangerous and in some ways threatening, had a 2-1 approval record and the Tea Party was more admired and approving of than the Democratic Party and the Republican Party as of a couple of months ago. Where you've got it pretty close, I think Chris, is on the second part. I think the first part would be like me doing a documentary on the civil rights movement and starting off with Stokely Carmichael and H. Rapp Brown and you know Malcolm X and Elijah Muhammad and then you get around to Whitney Young and, and Martin Luther King.

MATTHEWS: Yeah but Martin Luther King was never a black nationalist. He wasn't calling for separation. Let me go to you, David. It seems like what strikes me in doing this, and reporting it is the use of the flag "Don't Tread on Me." The great Gadsden flag from South Carolina. These people are referring to the federal government of the United States which was honestly elected. Nobody questions the election of Barack Obama. He won with a good, what? 53, 54 percent.

CORN: What was interesting to me about, about the piece that you did was, that you show the continuum between people, Dick Armeys of the world, who you interview, who was a member of Congress, you know libertarian conservative. You know helping to stir up the Tea Party. And then you have someone like Alex Jones who you just saw in that clip. Radio talk show host who says he's not right, says he's not left. But he says that basically there is a planetary elite that literally has a secret plan to kill 80 to 99 percent of the population. And you have Rand Paul going on his radio show every couple of months, in which they talk about the threats to liberty. Now I'm not saying that Rand Paul believes the conspiracy theories of Alex Jones, but by appearing on that show he is somewhat legitimating-

CORN: -Alex Jones as a voice of the right.

MATTHEWS: Why, look Dick Armey, we all like, I've known Dick Armey forever. Dick Armey will not disown the birthers. Now this is where I think you're wrong Pat. Thirty-two percent of Republicans, self-identified Republicans are birthers now. They believe the President wasn't born in the United States now. The latest CBS poll. So you can't just say it's a fringe crowd.

BUCHANAN: Alright well let me talk as a political figure-

MATTHEWS: I mean can you imagine a third of the Republicans you know believing this guy is not an American. It's true.

BUCHANAN: Well Chris there about one-third of African-Americans in this country think that George Bush was responsible for either blowing up or deliberately not doing anything-

MATTHEWS: What poll was that?

BUCHANAN: I saw it after New Orleans. Because they said, because it was black folks there. Now what do you do about that? Here's what I do about birthers, I say, no. I think the Honolulu Advertiser. They didn't huck that up. I think he was born in Hawaii. And they say, "Well we don't think so." I'd say, well who are you going to vote for? If the say, "Well we're gonna vote for you I'd say thanks, fine." But you-

MATTHEWS: Even though you're de-legitimizing the government and justifying a lot of talk here.

BUCHANAN: I'm not legit-, Chris there are people out there in my movement, all over the place that got views- 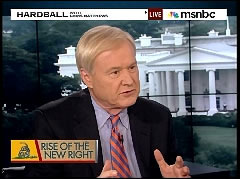 MATTHEWS: You don't think it's dangerous for people to believe this government is illegitimate?

BUCHANAN: Mean in what sense?

MATTHEWS: And believe it's illegitimate. Meaning it was a usurped power taken from the people. Somehow this guy is not an American. Somehow he was elected-

BUCHANAN: I understand the birthers but I don't know anybody that doesn't think this was a legitimate election.

MATTHEWS: They say he shouldn't have been on the ballot.

CORN: This is a danger and we've talked about this on the show before. If you have people out there saying that Barack Obama has a, is a secret Muslim, as one of the people say on your documentary, or he has a secret plan to destroy America or that America will cease to exist if what he wants, if he wants goes through, it does send a green light, a signal to people: "Wait a second. This is about life and death." This is...

CORN: And then what do you do? People out there are gonna get the wrong message about taking extreme action.

BUCHANAN: Well you know, like Lee Harvey Oswald. I mean take a look at these guys who have done all the shooting in the sixties.

MATTHEWS: By the way the trouble is this rationalizes all kinds of behavior. Let's take a look at this. This is the origins of the Tea Party voices you'll hear right now. Let's listen.

MATTHEWS: And then you have the head of the John Birch Society saying that Ike was a communist, his brother Milton was a communist. All communist discipline guys. Pat these people are saying things about the country that just aren't true. The President is not legitimate. That the, that the federal government is a tyranny. They are justifying violence.

BUCHANAN: Well look that's, I think that's preposterous. Look now, I'm sure you can go out there, you've got a country of 300 million and find people-

BUCHANAN: Alright but you're taking, you take Joe McCarthy in 1954, four years into his crusade, 50 percent of the American people thought he was doing a good job. Twenty percent, what I'm saying is, take a look...

MATTHEWS: That's the point. I'm not denying the popularity of these people. That's why we did the documentary. To say how scary it is.

MATTHEWS: Let me finish tonight with our big documentary coming up here tomorrow night. The Rise of the New Right at 7pm Eastern tomorrow night will stun you with what's happening with this country. You'll never again believe this so-called Tea Party movement is just about taxes or deficits or Obamacare. No, what you'll see is far more like the original Tea Party up in Boston, the one that previewed our war against the British. Look at the Gadsden flag they wield, that warning of "Don't tread on me" with the coiled rattlesnake. In 1776 it served warning to those who threatened America from abroad. Today it's being waved in contempt of our own honestly elected American government in Washington.

Listen to Rush Limbaugh stir on the new right by calling the government in Washington "a regime" or Orly Taitz, leader of the birthers, calling the President illegitimate. Listen to militiamen on guard against tyranny here on the Potomac and you get the full force of what's happening. This isn't about what the tax rate should be. It's an argument about whether the federal government deserves toppling like any other tyranny or illegitimate regime in history. It's not the talk of politics, but of revolution. Listen to Limbaugh, Beck and Palin and Michele Bachmann, Orly Taitz and yes Rand Paul and you hear of a Washington that has usurped authority, of a president who is not one of us, of a Congress that needs to be investigated for treason. Of a country itself that's been taken over and needs to be taken back.

The voices you'll hear speak for themselves. The guns you see, the semi-automatic weapons of the arms of those who see the government of the United States as the looming tower of tyranny. If I can put it as bluntly as possible, catch The Rise of the New Right here tomorrow night at 7:00pm and you'll suddenly get why you're seeing men at political rallies for the first time ever, wearing guns.