Matthews: Obama Must Summon All His 'Music and Magic' to Pass Health Care

These must be really desperate times for the Democrats, if the syndicated Chris Matthews Show that was aired over the weekend is any indication, as both the host and one of the guests claimed Barack Obama would need to tap into military, musical and even mystical powers to get a health care reform bill passed. During the intro of his show, Matthews declared that Obama "must now lead the band with all the music and magic he has in him" and guest panelist Michael Duffy, of Time magazine, reported that Obama is going to unleash "the infantry, the air cover, the artillery" on Congress to get health care passed. [audio available here]

The following exchanges were aired on the February 28 edition of The Chris Matthews Show:

CHRIS MATTHEWS DURING INTRO: Party time! After 13 months of whispering and wooing across the aisle, the President must now win with those on his side. He must rally the Democrats to pass health care because they are all he's got. He must now lead the band with all the music and magic he has in him. Selling victory. To win his biggest test, one he set himself, the President must convince his people the prize is worth the pain. He must teach the deepest of all truths, that it's what you do with what you've got.

(After clip of Obama)

CHRIS MATTHEWS: Wow Mike! It seems like he's laying it down, the Democrats are gonna have to do this alone. Does he have the 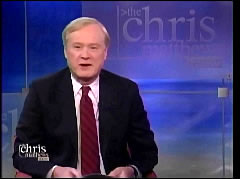 power, the juice, the political will to lead them into this fight?

MICHAEL DUFFY, TIME: He doesn't right now, not today. And that's why they haven't had the vote and that's why it isn't law yet. But in the next four weeks, before the Easter recess, under the new, new, new revised schedule of health care reform, they are going to do everything they can. Put all the infantry, the air cover, the artillery they can bring to bear on the Congress and try to get this through with just Democratic votes alone before they go home.