On 'Today': Obama Like A 'Scolding Parent' to Wall Street 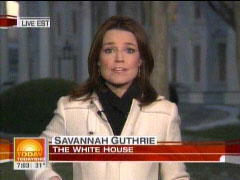 Continuing the trend of embracing Barack Obama's bashing of Wall Street bonuses from last night's evening news, NBC's "Today" show, on Friday, described Obama as "outraged!" "agitated," and claimed he "took the tone of a scolding parent." Opening the "Today" show Matt Lauer exclaimed: "Good morning, outraged! President Obama lashes out at Wall Street for doling out nearly $20 billion in bonuses despite the financial crisis." Then a little later Lauer threw it to Savannah Guthrie, who opened her story this way:

SAVANNAH GUTHRIE: The President did not hold back. He gave a dressing down to Wall Street that went on uninterrupted for two-and-a-half minutes. This after he read in the newspaper about some big bonuses.

GUTHRIE: The President took the tone of a scolding parent, reacting to news Wall Street was still paying itself big bonuses. $18 billion last year, even as many banks' balance sheets crumbled, billions of taxpayer dollars spent to bail them out.

Lauer did bring on CNBC's Melissa Lee to give Wall Street's side of the story, as she noted: "That you need to pay out these bonuses in order to retain the top talent," but then sheepishly added, "We don't know how this is gonna go over with the public."

The following is are transcripts of Lauer's intro, followed by the Guthrie report and then analysis segments from David Gregory and Melissa Lee as they were aired on the January 30, "Today" show:

MATT LAUER: Good morning, outraged! President Obama lashes out at Wall Street for doling out nearly $20 billion in bonuses despite the financial crisis.

LAUER: But can he really change Wall Street's ways?

LAUER: Let us begin this Friday morning with that tough talk from President Obama aimed directly at Wall Street. NBC's Savannah Guthrie is at the White House with more. Savannah, good morning.

SAVANNAH GUTHRIE: Good morning, Matt. The President did not hold back. He gave a dressing down to Wall Street that went on uninterrupted for two-and-a-half minutes. This after he read in the newspaper about some big bonuses.

GUTHRIE: The President took the tone of a scolding parent, reacting to news Wall Street was

still paying itself big bonuses. $18 billion last year, even as many banks' balance sheets crumbled, billions of taxpayer dollars spent to bail them out.

GUTHRIE: But with the banks still on shaky ground, the President knows he'll likely have to ask Congress for more money to bail them out. Some banks have cut back. Bonuses actually dropped 44 percent last year. But still, the news about nearly $20 billion in bonuses is making a hard sell even harder.

OBAMA: You know, the American people understand that we've got a big hole that we've got to dig ourselves out of, but they don't like the idea that people are digging a bigger hole even as they're being asked to fill it up.

GUTHRIE: Beyond bailout bonuses, there are reports of a former Merrill Lynch executive spending more than $1 million redecorate his offices after his firm failed. And Citibank's near purchase of a new $50 million corporate jet as it was getting a government bailout.

OBAMA: Secretary Geithner already had to pull back one institution that had gone forward with a multimillion dollar jet plane purchase at the same time as they're receiving TARP money. We shouldn't have to do that, because they should know better.

VICE PRESIDENT JOE BIDEN: I mean, it just offends the sensibilities. I mean, I'd like to throw these guys in the brig.

GUTHRIE: Well, all that presidential outrage kind of eclipsed the other news item of the day, the President signing his first law. It's an Equal Pay law that makes it easier for women to sue for pay discrimination and it brought out Michelle Obama for her first public remarks as First Lady, Matt.

LAUER: Alright Savannah Guthrie at the White House. Savannah thank you very much. NBC's David Gregory is moderator of "Meet the Press." David, good morning to you.

LAUER: The President was agitated. He was blunt in dealing with these bonuses in 2008 on Wall Street. He's in a tough spot, isn't he? He's gonna have to come to the taxpayers again and say, "I need more money, billions of dollars to bail out the economy," some of these specific firms. Now he hears about these bonuses. He's looking at these companies, saying, "You guys are killing me."

GREGORY: Yeah. Well that's, that's exactly what I was gonna say. That was the message here, which I think was exaggerated in some respect to say, "You are not helping me when I have to go back to Congress and ask for a lot more money." And let, let's be clear about what this is. The President has asked for more bailout money to the tune of $350 billion. But on paper, at least, the losses from these bad mortgages for these banks is over $1 trillion. And all this talk about recapitalizing the banks because they don't have enough capital to keep lending, it's gonna be very expensive. And most people who are following this closely think it's inevitable that the taxpayer is gonna have to pony up more money and that's why the President was none to happy. It doesn't make his job politically any easier.

LAUER: The Senate is gonna to up the stimulus package in the early part of the week. We already know what happened in the House, it passed but with not one Republican vote. The dynamic of power is different in the Senate, David, but what's, what's the likelihood of a little more compromise?

GREGORY: Well, I think it's certainly possible, and you're already hearing some tax measures that are being discussed. More tax cuts, particular business breaks, an effort to reduce the alternative minimum tax that hits middle class taxpayers. So, you'll see that kind of give. Primarily, though, the parameters of the package will remain largely the same. There is that different power dynamic in Senate, more moderate Republicans, more opportunity to pick up more Republican votes. But there is at least some shared sentiment among some Republicans who say no way, "This is a bad idea on stimulus. It's not gonna work and we're gonna hold our ground as Republicans."

LAUER: For more on the bonus fallout, let's bring in CNBC's Melissa Lee. She's at the New York Stock Exchange. Melissa, good morning. How is this tongue lashing from the President gonna go over on Wall Street? I'm not talking about in the stocks, I'm talking about at the companies that are getting the tongue lashing?

MELISSA LEE: Well, you know, Matt, it is very hard to make a defense case when you're paying the sixth biggest pool of bonuses out there, and it was far from the sixth biggest year on record in terms of profits. But here is the defense that Wall Street is making today. First of all, the bonuses, as Savannah Guthrie had mentioned are, in fact, down. Yes, it is a huge pool of bonuses, but bonuses are down by about 44 percent compared to last year. And the second argument that Wall Street is making today is that you need to pay out these bonuses in order to retain the top talent. These firms are already struggling, and do you want to see your top performers walk out the door to another firm? So, you know, we don't know how this is gonna go over with the public, but right now, that's how Wall Street is defending itself.

LAUER: Alright, Melissa Lee. Thank you very much for your input this morning, appreciate that.