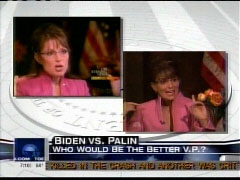 On Monday's "Today" show, NBC's Andrea Mitchell loved Tina Fey's parodying of Sarah Palin on "Saturday Night Live," so much that she played a clip the "30 Rock" star mocking Palin's inexperience, while simultaneously airing an actual clip of Palin being interviewed by Katie Couric, as Mitchell charged: "the reviews have been withering for her interview with Katie Couric, only her third since nominated."

However Mitchell didn't bother to air clips from "SNL" that mocked the Democratic side, most notably one that made fun of Barack Obama's relationship with Tony Rezko.

And proving the old adage that the best way for a Republican or conservative to get air-time in the liberal media is to criticize a fellow Republican, Mitchell underscored so-called conservative critiques of Palin: "Palin's critics now include some conservatives commentators. On the National Review Web site, Kathleen Parker called on Palin to drop out."

The following is the full Mitchell piece as it occurred on the September 29, "Today" show:

MATT LAUER: The economy is the big issue in the presidential race and that rescue plan is getting a lot of attention from both candidates fresh off their first presidential debate. NBC's Andrea Mitchell is in Washington with more on that side of the story. Andrea, good morning to you.

ANDREA MITCHELL: Well good morning, Matt. Both John McCain and Barack Obama voice tentative support for the bailout bill, but advisers in both campaigns know that as the economy dominates the news it could help Obama and the Democrats in the closing weeks of this campaign.

JOHN MCCAIN: This is something that all of us will swallow hard and, and go forward with. The option of doing nothing is simply not an acceptable option.

MITCHELL: In their first debate, Friday night, McCain was the aggressor.

MCCAIN: I honestly don't believe that Senator Obama has the knowledge or experience and has made the wrong judgments in a number of areas.

MITCHELL: But Obama held his own on foreign policy, McCain's presumed strength.

MITCHELL: This week the debate pressure is on Sarah Palin as she prepares for her one debate with Joe Biden. Ann, asked Biden about the challenge of debating a woman.

ANN CURRY: Can you hit a woman?

JOSEPH BIDEN: I don't, I don't verbally attack anybody.

CURRY: Is there a double-standard, is what I'm asking?

JOE BIDEN: I have no double-standard. Look at my debates. I debated Hillary Clinton 12 times. Tell me she's not a competent debater.

MITCHELL: Michigan Governor Jennifer Granholm will play Palin in rehearsals. But it's Tina Fey who has the most practice.

TINA FEY AS SARAH PALIN: Katie I'd like to use one of my lifelines.

AMY POEHLER AS KATIE COURIC: You don't have any lifelines.

FEY: Well in that case I'm just gonna have to get back to ya!

MITCHELL: Palin is still drawing big crowds but the reviews have been withering for her interview with Katie Couric, only her third since nominated.

SARAH PALIN: But ultimately what the bailout does is help those who are concerned about the health care reform that is needed to help shore up our economy, helping, it's gotta be all about job creation.

FEY AS PALIN: Those that are concerned about the health care reform that is needed to help shore up our economy. To help, it's gotta be all about job creation.

MITCHELL: Palin's critics now include some conservatives commentators. On the National Review Web site, Kathleen Parker called on Palin to drop out, writing, "Quick study or not, she doesn't know enough about economics and foreign policy to make Americans comfortable with a President Palin, should conditions warrant her promotion." And New York Times columnist David Brooks with Chris Matthews.

DAVID BROOKS: But is she ready to be vice president? Based on what we've seen with the Katie Couric interview, it's embarrassing. It's painful to watch those things. You want to turn them off.

MITCHELL: Although Joe Biden is a far more experienced politician and debater, he's had a few gaffes on the campaign trail, increasing the political drama of this coming match-up. Matt?