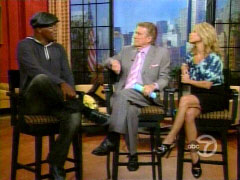 Samuel L. Jackson came on Tuesday's edition of "Live With Regis and Kelly" to promote his latest movie, Lakeview Terrace, but couldn't resist getting in a plug for Barack Obama. The Pulp Fiction star told Regis Philbin that when he was at the Deauville Film Festival in France, nobody really wanted to talk showbiz, instead the festival goers asked him about the upcoming election: "They're all hoping that we come into the world community by electing, you know, Barack they say. So we hope so."

The following exchange occurred on the September 16 edition of "Live With Regis and Kelly":

REGIS PHILBIN: And it seems there's another Samuel L. Jackson movie coming out every, you know, every six months. You just got back from the Deauville Film Festival.

PHILBIN: Two-and-a-half months is right. How was the Deauville Film Fest?

JACKSON: Deauville was great. It's actually the Deauville American Film Festival. They actually screen a lot of films that are in the theaters, but the actual competition is for independent films. And they were there and they were, you know, doing a lot of stuff. And everybody's, more than anything, they don't want to talk to you about your films. They want to talk to us about the election and they're hoping that we-

JACKSON: And they're all hoping that we come into the world community by electing, you know, Barack they say. So we hope so.

PHILBIN: Yeah, well let's take a break, come back. We'll talk about the new movie, Lakeview Terrace. What a juicy role! I love this guy!