Matthews Line of the Day: McCain = Staying On the Titanic, Obama = Deliverance 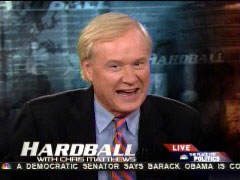 Chris Matthews put the choice before voters in 2008 in the starkest terms possible on Tuesday's "Hardball" as he claimed a vote for McCain was akin to staying on a sinking Titanic and a vote for Obama was a chance at "deliverance."

Matthews started the day citing the line on "Morning Joe," as first pointed out by Mark Finkelstein, and continued that line of attack later on the June 10 edition of "Hardball":

CHRIS MATTHEWS OPENING SHOW: You're on this big comfortable ocean liner and it's starting to sink. Do you board the little life boat or stay on the big ship with the light still shining, the band still playing? You're the American voter, the year is 2008 and you've got till November to decide. Let's play Hardball!

MATTHEWS: Let's say we're on the Titanic, as I said, and you knew it was sinking, some people are jumping off the huge ocean liner and getting to lifeboats that are bobbing out there in the cold, dark ocean. You look around the Titanic, the lights are still on, the music's still playing, the ship's still above the water, it seems secure. You've been comfortable there before. Do you stay on the Titanic, knowing it might sink, or do you get into that crowded lifeboat and take a chance with the unknown dangers of the ocean at night? That's what a lot of people feel about this election right now. It's future change versus past security. Barack Obama, young, little known candidate, is all about change. John McCain, a familiar member of the Washington establishment, as defined by his hawkish views on national security. Tonight we're gonna take a look at the decision in ‘08. And joining us right now is Pat Buchanan and Joan Walsh and John Harwood. So Pat, you're first. That's a big decision. You gotta decide to get out of the big boat that's sinking–

MATTHEWS: –and get in the little boat or stay there.

BUCHANAN: I think you stay on the big boat and go on down with it, Chris.

MATTHEWS: Ha! That's what you did with Nixon! You never talked.

BUCHANAN: What, look, what, what Barack offers is, you're right, he offers freshness, youth, change but also risk.