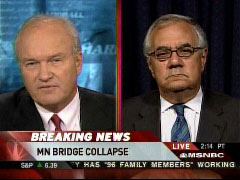 On tonight's Hardball, Mike Barnicle, substitute-hosting for Chris Matthews, used the tragedy of the bridge collapse in Minneapolis to call for bigger government and wondered, "Does this help the Democrats?" All throughout tonight's show, Barnicle repeatedly pressed his guests to call for an increase in the size of government and at one point even demanded: "Government's gotta get bigger!"

First up Barnicle asked the liberal Barney Frank where he would find the money to pay for bridge repair. After Frank responded that he would "end the war in Iraq" and raise taxes to improve America's infrastructure, Barnicle took the Congressman's cue to advance the tax hike/big government theme for the entirety of the show.

The following are just some of the exchanges as they occured on the August 2, edition of MSNBC's Hardball:

Mike Barnicle: "Welcome back to Hardball. Minnesota's tragic bridge collapse is raising new questions about our country's infrastructure and how much we're investing to keep it safe. Democratic Congressman Barney Frank of Massachusetts is the chairman of the Financial Services committee. Congressman, every city in this country or nearly every city in this country, people go to work, they use the subways, they drive along highways that have been built, been there for 40, 50, 60 years. Bridges that have been there, perhaps longer. The Golden Gate, San Francisco, Verrazano-Narrows, the Brooklyn Bridge, the Tobin Bridge in Boston, Massachusetts. Where are we gonna get the money that everyone is talking about, today, to repair this infrastructure?"

Rep. Barney Frank: "Well we're gonna get it from taxation and one way we can do that, frankly, in my judgment, is end the war in Iraq. I, when I proposed spending more on some of these things, people say to me, where am I gonna get the money? I was in Congress on September 10th, 2001 and I know, factually, there was no money in the, in the budget at that time for the war in Iraq and since then we've found $500 billion. So, sometimes, I think I should go find the guy who found that $500 billion and ask him if he can find some of that for us here. I mean we're a very wealthy country. We can afford it as a country. The question is, how do we allocate it? And we've got this odd view that some people have been holding, which is that any time you cut government it's a good thing. And I have colleagues who say, ‘It's the taxpayers' money not the government's money. Let the taxpayer keep the money.' Well, of course it's the taxpayers' money. Sensible taxpayers know they have two sets of needs. Some are best done individually but some we have to pool our resources. I can give you the biggest tax cut in the world, you can't fix a bridge."

Barnicle: "Yeah but you know Congressman, you say sensible taxpayers and I agree with you, there are, there are huge numbers of sensible taxpayers out there in this country and yet we are already, not even on the edge of a presidential campaign, we're into a presidential campaign and in state after state, primary after primary, each and every candidate, each and every campaign is forced to respond to this litmus test of 'No New Taxes.' How are we gonna get taxes passed when you can't get anything done in the Congress it seems?"

Barnicle: "So, I mean to stick with the political, on this evening when nearly everyone in America is preoccupied with, with the natural disaster in, in Minneapolis, does this help the Democrats? Does it help you? This sort of a disaster? I mean people at, at street-level, at side-walk level, no matter what they think about the growth of government, whether they want to restrain it, reduce it, get it to grow, they know that volunteerism isn't gonna rebuild this bridge or any other bridge in this country."

Barnicle to Tom Ridge: "So I mean you're a Republican and yet your old pal, the President's father became famous or infamous at the convention in 1988, 'Read my lips, no new taxes.' How are we gonna pay for this stuff?"

Barnicle, again to Ridge: "Government's gotta get bigger to help, to help governors in, in various states."

Barnicle to Sen Chris Dodd: "So Senator Dodd, let me ask you now, you're gonna introduce this bill, it's gonna go on to the Senate floor and what do say on the Senate floor and on talk shows all across this country when you are confronted with people who say, 'No, no, no. Government's too big. We gotta keep government out of our lives. We need smaller government.'"