'Today' Portrays Dick Cheney As the 'Master of Stealth' 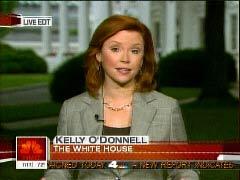 Carrying the left's water, on this morning's 'Today' show, NBC's Kelly O'Donnell furthered the liberal spin of Dick Cheney as a dark and sinister force inside the White House. While refusing to label Melanie Sloan and Michael Blanton as the known liberals that they are, O'Donnell cited them, along with the Washington Post's Barton Gellman, in a segment that portrayed Cheney as a "master of stealth." In the story about Cheney withholding documents from the National Archives, O'Donnell aired three soundbites opposed to Cheney but only aired one from a Cheney advocate, White House Deputy Press Secretary Dana Perino.

The following is the full, unbalanced segment as it occurred on the June 24, 'Today' show:

Meredith Vieira: "One of the key architects of the war on terror, Vice President Dick Cheney, is back in a very uncomfortable place for him, the headlines. NBC's White House correspondent Kelly O'Donnell has more. Kelly, good morning to you."

Kelly O'Donnell: "Good morning, Meredith. The glare of public exposure is probably the thing the Vice President dislikes most. And he's getting more of it, than usual. There's a series running in the Washington Post this week examining his role. And there's a brewing feud between the Office of the Vice President and the National Archives over the handling of classified information. Wielding more power than any Vice President in U.S. history, a master of stealth, even inside the White House."

Tom Blanton, George Washington University: "Vice President Cheney's been the leader of the effort to say, 'we need a cone of silence over the Executive Branch.'"

O'Donnell: "Most notably on the controversial policy of holding terror suspects, without charges, indefinitely. As detailed in the Washington Post, Mr. Cheney quietly gave his detainee proposal to the President, bypassing the standard staff review."

Barton Gellman, Washington Post: "The top ranking officials in the White House never knew about this proposal before the President signed it. That's highly unusual in the Bush or any other White House."

O'Donnell: "Cheney's influence turns out to be surprisingly wide-ranging. For example, the Post finds he was the force behind capital gains tax cuts and also put an end to the snowmobile ban in national parks. In an interview last year, he said the President gave him the green-light."

Dick Cheney: "...onset was I'd be an important part of the team and have an opportunity to weigh in on those issues I wanted to weigh in on and he's kept his word."

O'Donnell: "But has the Vice President gone too far? The National Archives thinks so. Mr. Cheney's is the only office in the Executive Branch refusing to file required reports and permit inspections by the National Archives, which monitors the handling of classified material."

Melanie Sloan, advocate for government ethics: "He is, in effect, holding himself above the law, saying that there is no oversight over the Office of the Vice President."

O'Donnell: "The White House acknowledges there is an open dispute but backs Cheney's position."

Dana Perino, Deputy White House Press Secretary: "...from following the, the laws of the United States he's exempt just from this reporting requirement."

O'Donnell: "The National Archives unit that looks over how government offices handle this kind of classified information, has gone to the Attorney General. That happened in January but Alberto Gonzales has not responded yet. Now Democrats are asking questions and they're also saying this needs to be investigated. Meredith."