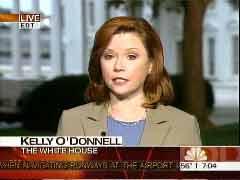 On this morning's Today show NBC's Matt Lauer and Kelly O'Donnell advanced the Democratic Party's whine, er, line that Bush was politicizing 9/11. Lauer opened this morning's Today: "The politics of 9/11. President Bush makes a prime time speech calling for vigilance in the war on terror but some Democrats cry foul....Democrats are furious saying that he used the anniversary of 9/11 for political purposes."

In the 7 am half hour Ann Curry introduced O'Donnell's report:"Today's attack in Syria came just hours after President Bush warned in a prime time speech that terrorists are still bent on striking America but his defense of the war in Iraq on the 9/11 anniversary has some Democrats very angry. NBC's White House correspondent Kelly O'Donnell has more this morning."

After running clips of some of the 9/11 memorials from that day O'Donnell repeated the Democratic line: "Just eight weeks until the midterm election Democrats argue the country must do more to secure ports, trains and airlines. Another angry video message was released from al Qaeda's number two, Ayman al-Zawahri, renewing threats. Today the President's perceived strength against terrorism may not be the same political asset it once was."

O'Donnell then threw it to historian Michael Beschloss: "Why hasn't Bin Laden been caught but in a bizarre way it helps him because it reminds Americans that there is a clear and present danger."

However O'Donnell noting wanting to leave Bush off the hook reminded viewers: "The President, who said in 2002, that he did not spend that much time on him, did invoke Bin Laden once again."

After running a brief clip of the President O'Donnell then concluded her segment giving the Democrats the final word: "The President did say he hopes that the country will unite but his remarks did stir anger from some Democrats. Senator Kennedy said the President should be ashamed. Senator Schumer of New York said it is not commemorating 9/11 to politicize it. Ann."