What many people are probably considering the lamest surprise reveal in modern history, the upcoming “top-secret” Michelle Obama Netflix documentary is coming sooner than expected and some in the media are dying of excitement to say the least. 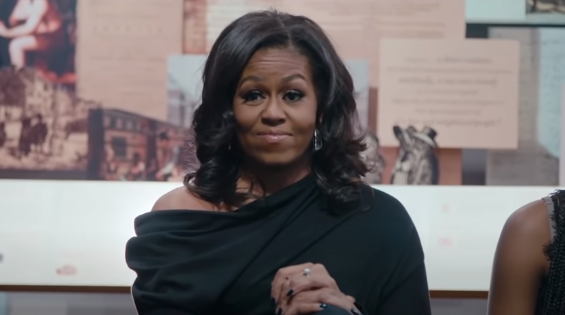 Really though, who are they trying to convince?

The Hollywood Reporter revealed that the wait is almost over for the film adaptation of the Former First Lady’s best-selling memoir Becoming. The project, which the outlet indicated had been kept “top-secret for months” will debut on the streaming platform on May 6.

Produced by Higher Ground Productions, the Obamas’ own filmmaking outfit, and directed by Nadia Hallgren, the documentary Becoming will delve into some of Michelle's life like her best-selling memoir of the same name, but will also take readers further. THR claimed that the film, “picks up where that story left off by following her on the 34-city tour that she undertook while promoting her book.”

In a statement, Mrs. Obama recounted the experiences she acquired on her book tour, many of which will be presented in the upcoming film. “Those months I spent traveling — meeting and connecting with people in cities across the globe — drove home the idea that what we share in common is deep and real and can't be messed with.”

Of course, this is going to be the inspirational streaming event of the year, so Michelle got real hokey with it. She continued, “we came together and shared stories, filling those spaces with our joys, worries and dreams. We processed the past and imagined a better future.” Sounds like a political speech. Perhaps she does want that vice presidential slot Mr. Biden said he would offer her “in a heartbeat.”

“In talking about the idea of 'becoming,' many of us dared to say our hopes out loud,” she added. Whoa, she used the name of her movie?! What a pro.

It’s quite clear that Michelle and her husband are cultivating a media empire at the moment. Not only have Obamas come out with Michelle’s number one book and this new documentary, their production American Factory won the Academy Award for best documentary earlier in 2020. She’s also the new smiling face of children’s public television, having just started a PBS KIDS show where she reads books to America’s youngsters.

Yeah it’s all peachy for Michelle, though it’s even better for her ardent fans in the media. The Washington Post in particular seemed to get a bit hot and bothered by the news, gushing that the doc arrives at a “defining moment in Obama’s life,” as the “widely-admired first lady’s influence remains evident” and she has “maintained a foothold in American culture.”