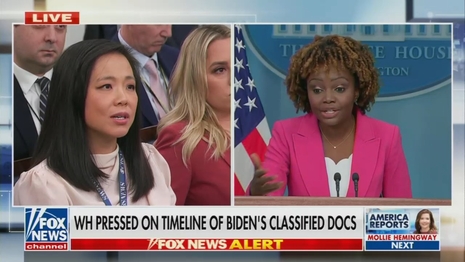 Tuesday’s White House press briefing marked another installment of a terrible, horrible, no good, very bad day for the inept Press Secretary Karine Jean-Pierre as, while she ignored journalists from the Daily Caller, Fox News, and Newsmax about President Biden’s classified documents scandal, she ran into a proverbial buzzsaw from outlets such as ABC, the AP, CBS, CBS News Radio, NBC, and NPR with fiery questions about the scandal.

Behind an N-95 mask, the AP’s Zeke Miller laid the groundwork by noting that Jean-Pierre told reporters on Friday that, in his summation, “the searches were complete and all the documents had been recovered” stood in contrast to how the White House counsel’s office said on Saturday they had days earlier found five more classified documents.

After Jean-Pierre ducked and insisted she wouldn’t comment, ABC’s Cecilia Vega drilled down:

On Friday, you stood here though and were asked about these documents, by our count, some 18 times. At that point, the President’s lawyers had found these five additional pages of classified documents. So, did you not know on Friday that those documents had been found when you were at the podium or are you being directed by someone to not be forthcoming on this issue?

Jean-Pierre hilariously claimed she has “been forthcoming” and was merely repeating “the statement at the time that we all had.” Vega asked again: “[D]id you not know that more documents had been found?”

The former MoveOn.org spokeswoman didn’t budge, stating in part: “I'm telling you — I just answered the question. I just said that I was repeating what the information that we had at that time.”

The next hardball came a few minutes later from NBC’s Peter Alexander, who took aim at White House aide Ian Sams’s talking points lashing out at Republicans: “[T]he White House says Republicans are faking outrage on this issue. Why shouldn’t Americans be outraged about classified documents being found in a garage?”

Jean-Pierre refused to engage, claiming she’s “been very clear” and “answered questions,” so Alexander called out this hypocrisy of her insistence the administration will stay out of commenting on the probe when the statement itself levels political charges.

The briefing grew especially tense a little later with CBS’s Weijia Jiang, who began: “[S]orry if I missed it, but on Friday, did you or did you not know about the additional five pages?”

Jean-Pierre became irked when, after she said “I literally just answered that”, Jiang asked her to reiterate with a simple “yes or no”: “Well, I — I mean, you’re — you’re not too far sitting next to her, so I was very clear. I provided — I provided the information that you all had at the time.”

Besides an incredulous look on her face, Jiang didn’t bite and, by doing so, got Jean-Pierre to admit she didn’t know about the five other pages and was supposedly in the dark about the November and December document discoveries until they were reported by the press.

And once she had those answers, Jiang kept pressing on the seeming coziness between the White House counsel and the Justice Department (click “expand”):

JIANG: But I'm asking: Did you know?

JEAN-PIERRE: No, I did not know. I'm saying I had the information. I actually said this to Cecilia. I had the information that you all had at the time, right. And so, this is why — I also said to Cecilia this is why we are trying to be very prudent here and we're trying to be very consistent and say this is an ongoing legal process and this is why I say we're just not going to comment from here. That is a perfect example in Cecilia's question and I was very clear about that.

JIANG: When did you learn about the documents found at the Penn Center in November, and in Wilmington in December?

JEAN-PIERRE: When your team was a — was a doing a story on it.

JEAN-PIERRE: Because I was also asked a similar question about if our team has been engaged on this and I've been very clear. This is something that the White House counsel is handling. This is something that is being handled by the President's lawyers and been very clear — that's why we are — this is why we are being prudent here. This is why we are being consistent with what we have done the last two years, when it comes to DOJ — Department of Justice investigation, we are just not going to interfere.

JIANG: Well, on that note, you've repeatedly emphasized the need just as you did today for independence, for integrity of the Department of Justice investigation, one reason why you continue to point us to the DOJ, so I wonder why then did the White House counsel go to Wilmington to facilitate the handing over of documents to the DOJ?

JEAN-PIERRE: That is a —

JIANG: How is that separate?

JIANG: How is that separating the White House from the DOJ?

JEAN-PIERRE: — and, Weijia, I appreciate the questions. I know there’s going to continue to be dozens of more questions, probably today and I will say reach out to the White House counsel’s office. That's one of the reasons my colleague was on the phone with many of you taking questions today. And I'm just going to leave it there. That is something for them to answer.

JEAN-PIERRE: Again, they have been working very closely with the Department of Justice. I would refer you to them if you want to know specifically about their actions, specifically about what they're doing. I would point you to the White House counsel's office. Look guys, you guys can ask me this 100 times, 200 times if you wish. I'm going if keep saying the same thing. I hear your question. It's been asked. It's been answered, it's been noted and we're just going to try to move on here and we're going to move on.

NPR’s Tamara Keith only had one question, but it was a scorcher: “[A]re you upset that you came out to this podium on Friday with incomplete and inaccurate information? And are you concerned that it affects your credibility out here?”

Of course, Jean-Pierre didn’t address that and instead said her top concern was “making sure that we do not politically interfere”.

As the timing would have it, CBS News Radio’s Steven Portnoy was best saved for last. He started with a Doocy-like question: “I just want to ask you about something you said last week. Last week, you were pretty insistent that you believed the President’s attorneys did the right thing. You still believe that?”

Jean-Pierre walked right into Portnoy’s plan as, without hesitation, she said “they did the right thing when it comes to making sure that when the documents were found, they handed it over”.

Portnoy then fired the question of the briefing:

[T]he reason I ask is...the first call that the President personal attorneys made on November 2 was not to the FBI that they had found what we now know were top secret documents out in the open. The first call was to officials at this White House in the West Wing. How is that the right thing? Is that the right thing when you see some — if you’re a lawyer and you don’t have a secret clearance and you see a classified document, shouldn't you call the Justice Department’s national security office right away?

Jean-Pierre clamped down even further, calling it “a very specific question that they should answer”.

To see the relevant transcript from the August 17 briefing (including other documents-related questions from CNN’s Phil Mattingly and Agence France-Presse’s Sebastian Smith and a softball from theGrio’s April Ryan), click here.